As far as House of the Dragon goes, no knight news is good knight news.

So the fact that Ser Harrold Westerling was last seen denouncing Aegon Targaryen’s ascension to the Iron Throne, and then was not referenced at all in the Season 1 finale, just might bode well for Graham McTavish‘s upright character… or maybe he’ll be dragon toast as soon as Season 2 premieres.

So while there’s still plausible deniability about the laudable knight’s future, TVLine chatted with McTavish to get his take on what might’ve happened in the aftermath of that Small Council meeting. The actor — whose many TV roles include stints on The Witcher, Preacher, Lucifer and Outlander (to which he’ll return in the upcoming Season 7) — seemed happy to consider Ser Harrold’s fate.

TVLINE | I would like to commend you on being literally the only character I felt I could depend on in that first season.
The only morally decent human being in the all of Westeros. Yes. It’s a lonely life, I have to tell you.

TVLINE | Given the way he barely shows up in George R.R. Martin’s Fire & Blood, maybe that ambiguity about what happens to him will work in his favor on the show.
Yes. I just always imagined, you know, Ser Harrold’s time alone in his room. I don’t really imagine he has a bedroom. I don’t think he’s allowed a bed. I think he just has to sleep standing up — probably because I never got to sit down the entire season. But yeah, I think he has a very, very sad lonely time of it.

TVLINE | When you just said that, I pictured him taking his white Kingsguard cloak and wrapping it around his shoulders at night.
[Laughs] Yes, exactly. That’s right.

TVLINE | All kidding aside, the last time we saw him, in Episode 9, he took a stand in a way we hadn’t seen him do before. He said, “I serve the king, there is no king. Later, suckers.”
Right. 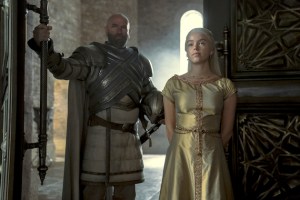 TVLINE | But we know that that kind of honesty often ends in tragedy in this universe. Obviously, we don’t know what Season 2 will be like, and we don’t know Ser Harrold’s fate other than that he dies at some point. But in your estimation, how do you think life might’ve gone for him after he made that stand at the Small Council meeting?
Harrold’s entire life had been about his devotion to that family, and really in particular to Rhaenyra. He would’ve known her since she was literally born, so it would have been a very, very difficult moment for him, but also one in the end he didn’t hesitate about. So when he leaves, I mean — hey, you know, in my mind, I imagined him sort of striding out, getting on his horse, riding out of town and really taking time to decompress to actually think, you know, “What am I going to do next?” Because I don’t think he has a plan. I don’t think Harrold would go home at night having an exit strategy if things went wrong. He would never have imagined that ever happening.

So, it’s a sort of cataclysmic moment for him, but also for [the Targaryens], you know, because this is somebody that they’ve entirely relied upon, who never questioned anything. I mean, to them he probably appeared almost just like a functionary. You know, “Fetch. Sit. Do that. Kill them.” And for that kind of a person to turn around and say, “You know what? I just hate the lot of you and so I’m leaving,” they’ll have a few things to think about, as well. Because it’s not like Harrold Westerling is no threat to them.

As you said, I don’t know where it’s all going, all the rest of it. But I mean, the possibilities are there for any number of scenarios at the moment.

TVLINE | That universe has also shown us that whenever hotheads are making the decisions, things tend to go badly and you eventually need someone who’s got a steady hand. Or maybe this is just me trying to manifest Ser Harrold’s living through the next season.
[Laughs] No, I agree. I agree. It’ll be interesting to see what they do. But you’re right, you know? Without that kind of a leavening presence, that can actually inject some kind of moral stability into the show. Yeah, it ends up being just a lot of spoiled people trying to hurt each other constantly, which dramatically only has so far that it can go.

TVLINE | I was so interested in how the relationship between Ser Harrold and Ser Criston Cole changed over time. I mean, he championed him early in the season, right?
Yes, oh, absolutely. Oh, yes. Yes. And that was a massive error of judgement.

House of the Dragon's Greens Vs. Blacks: Which Faction Has the Edge? Our Handy Head-to-Head Breakdown 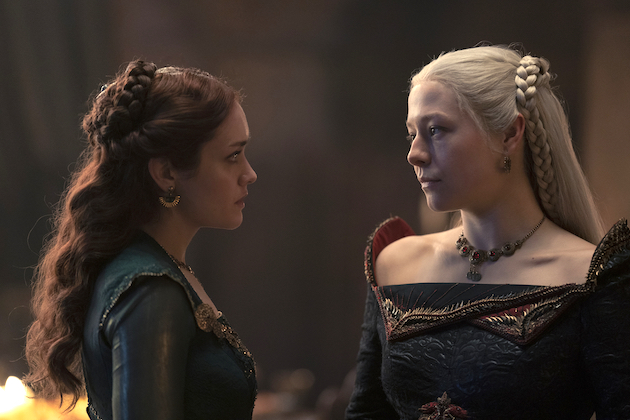 TVLINE | In Ser Harrold’s defense, a lot of us liked Ser Criston at first.
Well, you know, [Criston] is kind of different. He’s strong. He’s brave, but he’s sort of sociopathic. But yeah, Harrold definitely championed him, yeah. …H e values what Criston brings to the table, or what he appears to bring to the table. But yeah, I mean, it’s a slow realization for him, and by the time we get to Episode 9, I mean, it’s all he can do not to literally just kill him on the spot.

There was actually a line which I was a bit disappointed it didn’t make it in, where I’m facing off with him in the end. It was about “The rats in the Red Keep have more honor than you.” He really let him have it in that sense. Yeah. And  I understand why they would have maybe kept that out, because if you have that statement, what is the reaction from somebody? What is the believable reaction from somebody as hot-headed as Criston Cole? So, I can see why they might have left it out, but that’s certainly what he’s thinking, that this person standing in front of him has no honor. None.

And I’ve always been fascinated by the subject of honor and integrity, in real life as much as fictional life, and it’s such a rare commodity. I love it. I loved the chance to play somebody who really possessed it very deeply. And yeah, it was a rare opportunity for me as an actor, [Laughs] but I am a morally decent human being. [Laughs]