Season 5 of The Handmaid’s Tale was a harrowing one for Gilead escapees taking refuge in an increasingly inhospitable Canada… which is why it seemed odd that one of the most vocal refugees had such little screen time.

Moira, played by series regular Samira Wiley, had little to do over the course of the season, despite being enmeshed in the effort to aid refugees in Toronto. She was often present in scenes at the house with June and Luke, and she accompanied June to Mayday’s outpost. But overall, Wiley was onscreen considerably less than in previous seasons of the Hulu drama.

When TVLine recently spoke with showrunner Bruce Miller, he acknowledged that Wiley’s character “got short shrift this year, and not through anything intentional.” He explained that Alexis Bledel’s decision not to return for Season 5 had unintended ramifications for other characters.

“When Alexis decided not to come back, I had built storylines around Rita and Moira and [Emily] together,” he said. “Honestly, that was a little difficult to pick up from.” 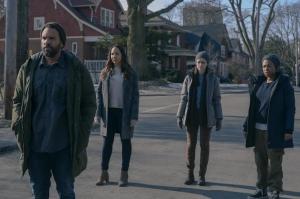 When Bledel’s departure became public in May, she said via statement: “After much thought, I felt I had to step away from The Handmaid’s Tale at this time… I am forever grateful to Bruce Miller for writing such truthful and resonant scenes for Emily, and to Hulu, MGM, the cast and crew for their support.”

Bledel had been with the series since its premiere in 2017. Her character, a former handmaid who’d been mutilated while living under Gilead rule, had a more violent sense than did Moira of what justice should look like for Gilead’s perpetrators. Though Emily took part in the murder of Commander Waterford in the Season 4 finale, the Season 5 premiere revealed that Emily had left her wife and young son to return to Gilead, possibly to seek revenge on Aunt Lydia.

Miller praised Wiley and co-star Amanda Brugel, who plays Rita, for the performances they turned in during the just-wrapped season, adding, “Their storylines, although they did spectacular work with them and they are heartbreaking, they weren’t as voluminous as I wanted them to be or their characters deserve.”

Did you want to see more of Moira in The Handmaid’s Tale this season? Hit the comments and let us know!