The last time we saw The Handmaid’s Tale’s June Osborne, she’d led a pack of former handmaids to help her murder Commander Fred Waterford in the woods. With Fred’s blood drying on her hands, she returned home and crept into her daughter’s nursery to hold little Nichole for the last time before going on the lam or surrendering to the authorities — it wasn’t clear which. Either way: June knew the jig was up.

So in the Season 5 premiere, she’s shocked to find out that, actually, the jig will go on as scheduled! Nothing to see here!

Meanwhile, in the first part of the two-episode premiere, Serena learns of her husband’s passing and immediately knows who’s responsible, and Emily peaces out for good. Read on for the highlights of “Morning,” then make sure to see what executive producers Warren Littlefield and Bruce Miller have to say about that shocker at the end of Episode 2!)

‘BY HER F–KING HAND!’ | We jump right back into June at the house, avoiding Luke and Moira’s increasingly worried questions about what’s happened. She nuzzles Nichole one more time, inadvertently smudging blood on the kid’s face, before grabbing her coat and heading outside. “I did it. I killed him. I killed Fred,” she tells Moira and Luke, euphoric as they look on in horror. “By her hand. By her f—king hand!” she adds before hopping in the car and driving away as they yell for her to stop. She does not.

Instead, she makes her way to a diner full of women who helped her finish Fred. They eat with abandon — pancakes, eggs, a milkshake — because, as one of the ladies notes, “Everything tastes better when Fred’s dead.” Outside, one of the women opens her car’s trunk to show June a big bag o’ guns; she hands June a pistol and promises that she can get more. It slowly becomes clear that these women saw Mission: Wipe Out Waterford as the first of many murderous operations, and they expect June to help them the way they helped her. Except she’s not interested, and she’s more concerned with the fact that Emily seems to be missing.

This angers the former handmaids. “We all went to the woods for you, June,” one says. “He was your monster, and we tore him apart for you. Now it’s my turn,” another points out. June explains that none of them are likely to get the justice they deserve, and the situation escalates until one of the women points a weapon at June and then fires it in the air several times. Knowing that the police will soon be on the way, she takes a gun and then quickly gets in her car. The others speed out of there as she does. 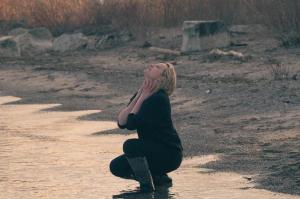 ADIOS, EMILY | June then goes to Emily’s house, where Sylvia informs her that Emily went back to Gilead “to fight, I think. To find Aunt Lydia, if she can. It’s what she needed to do.” Because June’s gotta June, she immediately decides that she’s to blame. But Sylvia is done with all of this and doesn’t want to discuss. “She was gone, and then she was here. It’s more time than I ever thought I’d get. We’re lucky in a lot of ways,” she says. And when June asks if Sylvia will let her know if Emily makes contact, Sylvia says no.

After she leaves, our girl is starting to come down from the adrenaline rush of ending her rapist’s life. Eventually she winds up at the edge of a body of water, washing her hands, which are still kinda bloody. She thinks about Hannah, both pre- and post-Gilead, and she cries. She looks distressed enough to raise the suspicion of a police officer who happens to be passing by, and pretty soon Luke is coming to get her at the station.

Thing is, June doesn’t want to come home. She knows law enforcement will be looking for her, and “I can’t wait for boots on the stairs.” Plus, she admits that she “loved” watching Fred die, and that’s probably not the best energy you want around a toddler? And as Luke tries to figure out how to get through to her, she makes a choice: She confesses to the murder to a Toronto Police officer, and she’s taken into a back room. Luke frantically cries “Don’t do this!” as she’s led away, but June has never looked so serene. 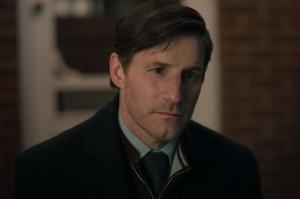 WELL, THAT WAS UNEXPECTED | That peaceful attitude continues as she’s questioned. “He raped me and kept me prisoner. He was a monster, and he deserved to die,” she says, waiting for the officer to arrest her. But — TWIST! — that’s not going to happen. The event to which June has confessed didn’t happen on Canadian soil, and therefore “it is not a concern of The Crown.”

June is taken aback, insisting that there has to be punishment for such an act? But her questioner insists that Canada “has no quarrel with you,” and she’s free to go. While I’m glad that June isn’t going to do time, there’s an insult-to-injury feel to how even the END of her years-long torture is unrecognized and dismissed so easily.

Luke brings her home, where Moira isn’t comfortable with the idea of June taking care of Nichole. “You scare me,” she says. “Me, too,” June answers, on the verge of tears. “I thought I’d be in jail.” They exchange “I love you”s, and then Tuello shows up to let June know that both Serena and Gilead have been cowed a bit by what she was able to accomplish. “I just came to say: well done. You did something terrible that needed to be done. I understand what that costs. May he rot in Hell,” Tuello tells her. And when she responds “Praise be,” he advises her: “Don’t let the bastards grind you down.”

Later June joins Luke and Moira as they give the little girl a bath. Afterward, June cuddles her daughter and cries, and once again I am impressed by the little actresses who play Nichole. So soulful! 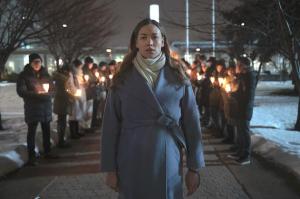 THE WIDOW WATERFORD | What’s Serena up to all this time, you wonder? After June’s care package shows up, Mrs. Waterford is moved to a secure location and informed of Fred’s death. She doesn’t believe Tuello when he shows up and says he’s not sure what happened after he handed Fred off at the border, and she outright calls him responsible for Fred’s death. This angers him, but after he chills a bit, he tells her about the FingerGram and shows her a photo of the commander strung up on the makeshift wall with “Nolite te bastardes carborundorum” spray-painted beneath. Serena asks, and learns, that it was Fred’s left ring finger in the envelope. “This wasn’t Gilead,” she says, furious. “It was June Osborne.” Tuello says that’s not possible. “You don’t know what she is,” Serena spits.

She’s even madder later, after seeing Fred’s truly destroyed corpse, to find out that Canada isn’t pursuing charges because the crime took place in No Man’s Land. “As such, June Osborne hasn’t broken any law,” Tuello tells her, adding that when her own charges are cleared, she can apply for asylum. She’s like, I THINK NOT.

They leave the morgue to find a long line of Gilead-friendly Canadians holding a candelight vigil for Fred. You can see Serena’s wheels turning as she slowly walks among her supporters, so it’s not a huge surprise when she announces that she’s going to bring the commander home to bury him. “I will see that my husband has a proper burial in the nation that he founded,” she says. “The Waterford name has power, and that will be respected and remembered.” A gobsmacked Tuello says that probably isn’t going to happen, but he’ll make a few calls.

THE NEW MRS. BLAINE | Back in Gilead, Nick is at home with his new wife, who walks with a cane and seems to know at least a little bit about what he’s really up to. And she seems supportive, which is a nice change! After asking if he saw June, she wonders, “And what she needed to do was done?” When he answers in the affirmative, it seems to please her. “Maybe June can find some peace now,” she says.