The Handmaid’s Tale‘s Season 5 finale ended with a darkly comic twist: Though June has spent the bulk of the Hulu series’ run trying to distance herself from her former captor Serena, the two women coincidentally bumped into each other as they were escaping Toronto — young children in tow — on the same refugee train in Episode 10’s final scene. (Read a full recap.)

“I think the fact that the two women kind of ended up together in a way that all of us have on JetBlue is the kind of thing that you want for our characters,” showrunner Bruce Miller joked to TVLine.

We picked Miller’s brain about what was said — and unsaid — during the brief-yet-fraught scene, and why that moment in the train car represents a first for Elisabeth Moss’ and Yvonne Strahovski’s characters. Read on to hear his thoughts. (And when you’re done, check out our conversation with Moss, who also directed the episode.)

TVLINE | I’m watching the finale, and I hear that baby crying on the train, and I start cackling. I had written in my notes earlier, “WHERE IS SERENA?” But in that moment, I knew!
Well, it’s very cool, isn’t it? 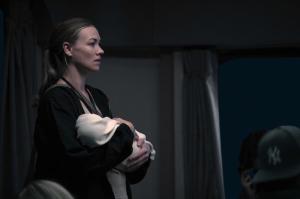 TVLINE | When did that come into your head, that you wanted the season to end with those two and their kids on the train?
The season was so much about June and Serena dancing around each other and finding out that, you know, even though they have a complicated relationship, they have a relationship. So, the season was always about that. So the capper on the end, this moment, it was spectacularly easy to figure out who was going to be in it. As I was starting to think about the end, to think about June and Luke having to flee again and what that was like… It came up because of Episode 7. When I when I read Episode 7, Rachel Shukert’s episode — that was her first script on the show, the episode where June and Serena are together and Serena is giving birth. So, God bless Rachel for being a fantastic writer and a quick study.

But after that episode, just seeing the dailies, actually, the connection between the two women, the positive emotional connection that could coexist with all the real venom and vengeance, surprised me… You don’t really realize how far Lizzie [Moss] and Yvonne [Strahovski]’s character have come since they’ve had a scene together, or a real scene together, an honest scene together. So, having all those things that seemed so delicious — the birth scene! I mean, after that was over, you’re like, “Well, it seems like this story cannot be overkill. Those two magnets click again.” I don’t know what’s going to happen, but it does feel like the end of that story is these two people finding each other again.

I was thinking through the story with Serena first thinking, well, she wants to go somewhere where she’s anonymous, where having no identity, no one would blink at that, and where there’s a lot of people and where I can get the hell out of Toronto… It just made this perfect sense that they both have exactly the same need, so they’d end up in the same place. And then, once again, they both have little kids. And when you have little kids, on a conveyance, you’re not sitting down, ever. [Laughs] You’re walking around and you can hear the other babies. You know who has a baby, and you know if yours is the worst one. [Laughs]

… I think both of them are relieved to see a familiar face, which is the point of the season is that they’re familiars. They are they are not friends, they are not colleagues. They’ve done all this stuff. They are none of those things, but they are in each other’s lives, and they know each other more than a stranger — and that has value. In this particular moment, seeing not a friendly face, but a familiar face, is what that moment is about. And they’re in the same boat. And it’s just I just love that they’re, you know, they’re both on the bottom. Usually, it’s the other way around for them.

TVLINE | The whole episode is gutting.
What about the car stuff, though? Didn’t Lizzie do a good job with the car accident?

TVLINE | Yes — and the feeling of foreboding leading up to it! As the camera did that 360-degree pan, I was like, “Something terrible is going to happen.”
“What the f—k!” [Laughs] Yeah.

TVLINE | It’s a sunny, nice day! What could go wrong?
She’s wearing that cute yellow top. What could happen? How bad could it be? [Laughs]