This post contains spoilers for The Handmaid’s Tale‘s Season 5 finale.

Remember Fred’s grandiose Gilead funeral in Episode 2 of The Handmaid’s Tale‘s just-wrapped season? With the marchers and the coffin and the procession that filled multiple streets, that hour was the largest production the show had ever pulled off… until this week’s season finale. Series star/executive producer Elisabeth Moss directed both.

Naturally, TVLine couldn’t wait to talk to Moss about her latest turn behind the camera, which included executing an agonizingly emotional — and pivotal — scene for her character, June Osborne, smack in the middle of an overcrowded train station. (Read a full recap of the finale here.)

Read on as Moss breaks down her experience helming the episode — including why “Kokomo” was the only way to go for that other major scene. (And click here for our interview with showrunner Bruce Miller.)

TVLINE | Let’s start in the train station. Give me everything. How many people were you moving around while you were directing that?
There were over 500 background actors. 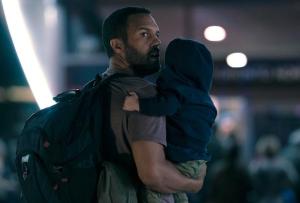 TVLINE | I’m not familiar with Toronto — were you at the main train station in Toronto?
No, the main train station in Toronto is quite big and quite hard to film in, because they, for some reason, insist on running trains in and out there and keeping the population moving! [Laughs]  We filmed at, actually, a subway station that was at York University.

TVLINE | How long did it take to get everything you needed to film?
OK, so this is crazy. Basically we could not get into the train station until midnight. It was a Saturday night. We could only shoot there on Saturday night… and we had to be out the door, all equipment out the door, not a soul, not a light, nothing inside, not a box at 8 am, so we had eight hours. It was eight hours, which meant that we could only shoot for seven hours, because they needed an hour to load out.

TVLINE | I imagine someone wheeling out a cake to sing to you, and you saying, “We don’t have the time!”
[Laughs] Well, I believe they wheeled it out before midnight.

TVLINE | Those train-station scenes are inherently chaotic, but we also get this very intimate moment between June and Luke. Talk to me about balancing that as a director — it seems like it would be easy for something like that to get swallowed up by the grandeur of the surroundings.
I love that you’re asking me, like, inside baseball questions. I love these kinds of questions, you know what I mean? I love the questions that are not just like, “What do you think your character is feeling?” 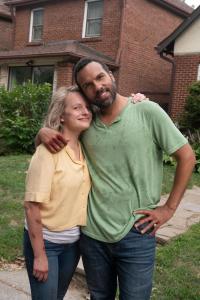 TVLINE | Well, I’ve definitely asked you a bunch of those, too, over the years.
[Laughs] So, for that scene, for the phone-call scene, another interesting story. The whole train station sequence took four days. So, there was the night that we did at York University, which was the 550 people on my birthday, and then there was the platform, which took two nights. And then there was inside the train, which was a build. We built three cars of the train inside a studio [for Serena and June’s scene].  I mean, you’ve never seen anything like it. It was extraordinary. The most expensive thing we’ve ever done on the show, that’s the finale.

… The phone call was on the platform, and we shot it over two nights. I shot O-T [Fagbenle]’s side first. And we cleared out most of the background, so I think on some of the shots, in the wider shots, there were people passing. But when we did his close-up, there really wasn’t anyone there — for obvious reasons: sound, and also just intimacy. I wanted him to go first, because he and I had spoken a lot about the scene, what we wanted it to be. We went off the script quite a bit. We would kind of improvise and then come back to the script, improvise and come back to the script. What you see is a combination of what’s in the script and improvisation. And I’ve never done anything like this. I was at the monitor watching him, his close-up. I had one headphone in, so that I could hear him. I was watching and I had the phone to my ear. So, I was doing the scene with him while watching him on the monitor.

So sometimes I’m saying the lines, and sometimes I’m giving him direction on the other side of the phone… I love working with O-T, because he’s very fluid like that. Like, he loves to go back and say the line again, he wants to go back to the beginning of the scene and do the whole thing again. Like, he’s very, very fluid and very instinctive and you got to just give him that runway. You’ve got to just let him go.

Anyway, I basically had him do his side first, because he’s very much driving that phone call. What he says and how he convinces June to get on the train just affects what June says and how she reacts. He was so phenomenal and just so beautiful, and just broke my heart. Oh my god, he just really brought it to life. Then the next night, I did my side and the same thing; he was on the other end of the phone. He was standing across from me, not at the monitor, so that he could look at me and I could look at him. But we cleared pretty much everybody out of the station so it was just me and him. It felt very intimate. It felt like it was just him and I.

TVLINE | Just so I’m clear: You shot that on the platform at the York University subway station, as well?
No. We shot that about two hours outside of Toronto at another location that was a train station platform.

TVLINE | Got it. There’s a visual we’ve seen throughout the series: the window shots that harken back to June sitting in her room in the Waterfords’ house. We saw it with Serena a few episodes back, and we see it near the start of the finale, when June’s trying on the bulletproof vest. Can you talk about that image and why you wanted it in this episode?
We call it “the iconic shot,” and it, you know, was done in the first episode. The first time you see June as a handmaid, she’s sitting in that window. And so, I like to use it as a callback to just always remind people whose story this is, that this is The Handmaid’s Tale, and that Gilead is always present. It’s a reminder not only of June and Offred, but it’s a reminder of Gilead, that Gilead is with her. Gilead is always present in her world. It’s a way of bringing Gilead into Toronto, you know? I did it in Season 4, but it didn’t make it into the cut. We ended up not using it. So this year, I was very much like, “Oh, I really want to make sure we do it this year. We need it.”

TVLINE | Whose call was it to use “Kokomo” for the scene where June gets run down by the truck?
It was my choice. [Laughs]

TVLINE | It is so terrifying in that scene!
Thank you! OK, so there was another choice that I cannot say, that we didn’t get permission from the artist to use — for obvious reasons, because it’s not a very pleasant scene, and it would imply that the person in the truck is listening to that music, right? So this artist didn’t want us to use that song. And I was like, I totally get it, I’m totally with you on that one. We were sent some options by our music supervisor, and “Kokomo” was one of them and it just fit. I wanted something that had a sense of humor to it. I wanted something that had a wink.

As crazy as it may sound, I don’t know if people necessarily look at this or not, but there are moments in the finale that have a real, like, wink to them, that are very tongue-in-cheek. And the use of “Kokomo” is one of the biggest ones of those. It’s supposed to be absurd. It’s supposed to make you laugh at the absurdity of this situation. And I wanted something that was just kind of vacation-y, that was kind of beachy, that had like this great, sunny attitude to it.

TVLINE | The last season is coming up. Are you planning on directing any episodes?
Yeah, I think I will be directing. I’m not sure which ones yet. We’re still working out all the scheduling and timing of everything and who can do what. We want to get our best team of directors together, if possible.