You’ve already seen Jen Walters “Hulk out,” but now Marvel Entertainment is pulling the curtain back, and giving fans insight on the many behind-the-scenes happenings that gave life to its most recent small-screen hero.

In a new six-minute-plus video released Saturday (watch it by pressing PLAY above), She-Hulk: Attorney at Law VFX supervisors Shannon Justison and Dadi Einarsson go deep into how they used CGI performance capture alongside human actors, and how they ensured star Tatiana Maslany’s acting could shine through the massive amount of digital effects used in the final product.

“We captured petabytes of data,” Justison says. “It was absurd how much data we pulled off the set.”

In addition to the heaps of “mo-cap” (short for “motion capturing”) recorded on set, the team then had the challenging task of pairing that information with Maslany’s performance — much of which was acted out from a hidden raised platform —  in order to create the most believable and realistic character possible. That mo-cap gear included both a helmet cam that mapped her facial expressions as well as a “second head” atop of her own, which helped co-stars nail their eyelines. 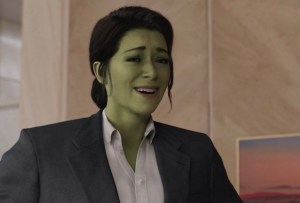 Speaking with TVLine ahead of She-Hulk‘s premiere, Maslany compared her Marvel experience with that of playing a cluster of clones on a certain BBC America sci-fi/thriller. “Orphan Black certainly prepared me for a sense of, ‘How do you move through a very technical blocking and a technical performance requirement, but also have spontaneity and be in the moment and be present?’ That was definitely a great training ground for this.”

But the difference in doing/becoming a She-Hulk, she said, “is that there’s definitely a transformation that happens, but I don’t actually get to feel it, because I’m in this mo-cap suit. If I look in the mirror, I don’t see She-Hulk and go, ‘Oh yeah, I am her. It’s a totally different suspension of disbelief.”

The series premiere, according to director Kat Coiro, created an extra technical challenge because blocking and shooting needed to be done not just for Maslany’s Hulk, but Mark Ruffalo’s as well.

“We had to build platforms for the two Hulks to interact and have the right eyelines and the right height,” said Coiro. “The real philosophy behind the VFX is to capture as much of the actor’s real performance in situ. And part of my job is to set up the set so that it almost feels like they’re normal actors, even though they’re wearing mo-cap suits and have cameras in their faces.”

With reporting from Matt Webb Mitovich

So how did you think She-Hulk‘s visual effects turned out? Watch the video above, then tell us your thoughts in a comment.