Even 10 years into his run as the Hulk, Mark Ruffalo apparently can be surprised.

The bulk of the first episode thus involves Bruce’s “Smart Hulk” persona schooling a reluctant Jen on how to live life as a sometime-Hulk — including big, green fighting techniques and, yes, the importance of reinforced bedroom furniture. That in-depth, cousin-to-cousin tutorial resulted in a bit of a first for MCU vet Ruffalo.

Asked by TVLine which was the “biggest” of the six episodes she directed, Kat Coiro said, “Well, the opening origin is huge, because we have two Hulks in long dialogue scenes, which is something that Hulks are not historically used to doing.”

As a result, “Mark [Ruffalo] definitely had an adjustment,” Coiro said, “because usually his Hulk is off on the sidelines, or in an action sequence, or has only a couple pages of dialogue. And this was five-page scenes.”

Also adding to the challenge for the director was the technical aspect of blocking and shooting two-Hulk two-handers.

“We had to build platforms” on which Maslany and Ruffalo stood, wearing motion-capture suits and head-mounted cameras that map facial reactions, “for the two Hulks to interact and have the right eyelines and the right height.” 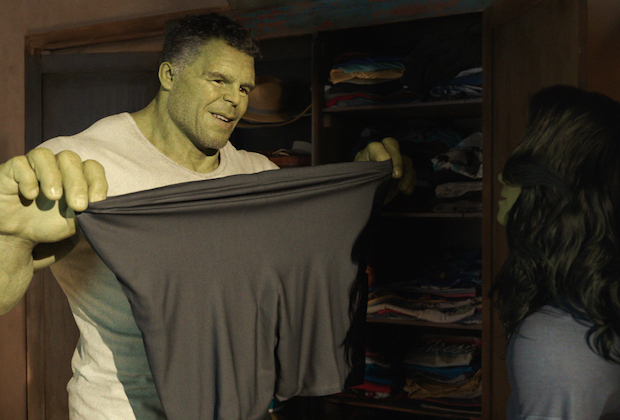 Meaning that even with all of the advances in CGI — Hulk-creating technology has existed in one form or another for some 15 years, after all — Ruffalo is still physically on-set for all of his Smart Hulk scenes.

“Luckily, we had Mark the whole time” that Bruce/Smart Hulk were needed, Coiro affirmed. “The real philosophy behind the VFX is to capture as much of the actor’s real performance in situ. And part of my job is to set up the set so that it almost feels like they’re normal actors, even though they’re wearing mo-cap suits and have cameras in their faces.”

But the greatest challenge for Coiro — whose previous credits include It’s Always Sunny in Philadelphia, The Mick and Dead to Me — was doing right by the comic book source material and its distinct, quippy, fourth wall-breaking tone.

As a director, she said, “The biggest challenge of the whole series is honoring the comedy and allowing for those little loose moments and improvisation that we all love from shows like Sunny, for example, but also having it be visually impactful and fit into the MCU.

“Usually, comedy and big visuals don’t go together,” she noted, “so it was a real balance of blending those two worlds.”