Surely, if Eve Best’s Rhaenys is to be remembered for anything she did in House of the Dragon‘s Episode 9, it’s riding into King’s Landing’s Dragon Pit on the back of her dragon and waging a highly public objection to Aegon’s ascension to the Iron Throne.

But if The Queen That Never Was is remembered for two things from the season’s penultimate hour, I hope we all recall how insanely quickly she made it from the ceremony to the Red Keep and back — with a costume change! — in time to royally mess stuff up.

If you recall, the point in the episode where Aegon started getting anointed is also the point where Rhaenys realized that all eyes are on the platinum brat at the front of the room… making it easy for a cloaked wannabe-commoner like herself to slip out a side door unnoticed by the gathered throng.

House of Dragon Vs. Rings of Power: Which Fantasy TV Show Reigns Supreme? Read Our Head-to-Head Breakdown and Vote for Your Favorite! 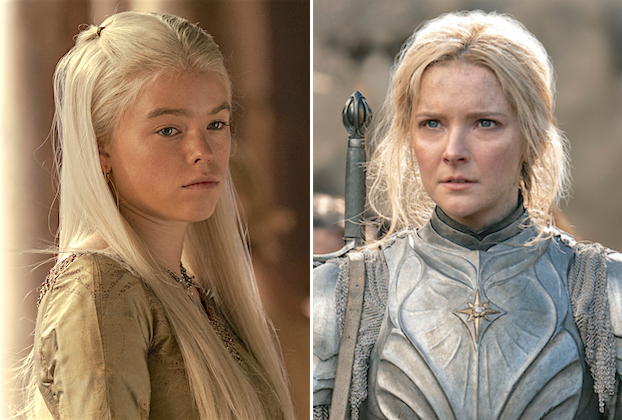 Minutes later, Aegon’s kinghood had scarcely begun when it was interrupted by a screeching, heavy-footed, uninvited guest: Meleys the scaly beast, piloted by an even-more-badass-than-usual Rhaenys, who at the last moment spared the lives of Alicent, Aegon, Otto and the rest of the gathered royals (though not the commonfolk who unfortunately were in Meleys’ way at any point during the proceedings — read a full recap here). 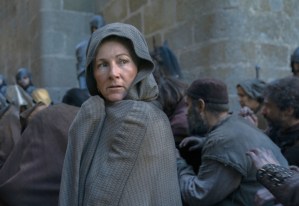 Look, if Rhaenys can achieve that volume with her hair episode in and episode out in an era before texturizing spray existed, who am I to question her reality-bending powers? That said, I am perplexed as to how she was able to: run all the way back to the Red Keep, make her way to her rooms, put on that admittedly awesome dragon-riding getup, traverse the grounds until she arrived at the dragons’ pen, hop on her mount’s back and get back to the ascension event so quickly.

Then I remember that it’s a show about dragons, and I relax and enjoy the sure-to-end-in-heartbreak ride.

Before next week’s Season 1 finale (watch a trailer!), few more thoughts about Episode 9:

* Something I’ll admit that I’m stumped/did not follow: Who was that man walking away from the burning building around the hour’s 43-minute mark? One of Larys’ fireflies destroying the web he referenced earlier? I’m open — educate me!

* Ugh Larys’ foot-fetish scene. Alicent, you are a QUEEN. Do not put up with gross men being gross IN YOUR CLOSE PROXIMITY.

* R.I.P. Lyman Beesbury! And given how poorly he’s aged (albeit not physically — the character looks almost exactly the same as he did in the premiere), it’s so hard to believe I ever found Ser Criston Cole charming.