The Halloween horror film franchise came to a close this past weekend with the release of Halloween Ends, which is streaming on Peacock (while also in theaters).

Picking up four years after the events of last year’s Halloween Kills, the grand finale found Jamie Lee Curtis’ Laurie Strode living with her granddaughter Allyson (Andi Matichak) while finishing her memoir; Michael hadn’t been seen since the mini-rampage that followed his Halloween Kills beatdown by a local mob.

Laurie decided to liberate herself from fear and rage and embrace life (…and maybe even a sweet romance with Will Patton’s Officer Frank Hawkins), but when a young man named Corey (The Hardy Boys‘ Rohan Campbell) is accused of killing a boy he was babysitting, it triggers a new cascade of violence that forces Laurie to confront the evil she can’t control,
“once and for all.”

Though the movie was arguably light on trademark Michael Myers malevolence (poor guy seems a bit winded from the events of Halloween Kills!), viewers got to see the serial slasher both in his trademark mask and without it (albeit very briefly, and never a clear, lingering look).

But a BTS photo shared on Instagram by Andi Matichak’s stunt double, Lydia Hand, shows us Michael Myers’ weathered, franchise-tested face, as embodied by James Jude Courtney throughout this final trilogy. (Fun fact: That was Nick Castle, “The Shape” from the original, 1978 Halloween, playing the “flasher” at the party Allyson and Corey attended.)

How do you think MM held up? Looking better than Jason Voorhees, I would say. 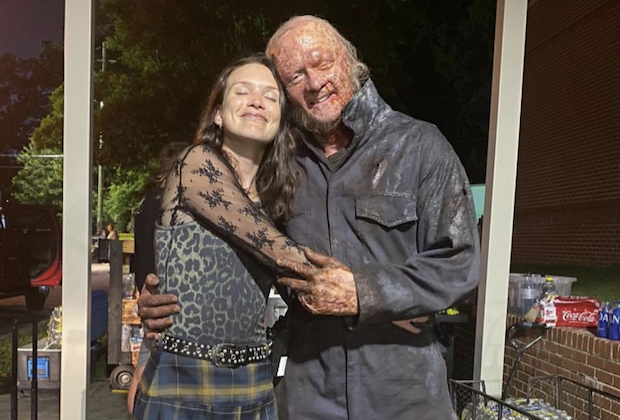 Halloween Ends is available to subscribers of the Peacock Premium tier, which costs $4.99 per month and also offers the supernatural horror film The Black Phone, the slasher flick They/Them and the blockbuster movie Jurassic World Dominion; the TV series Vampire Academy, Girls5eva, One of Us Is Lying and Bel-Air; the daily soap opera Days of Our Lives; and full seasons of Yellowstone, Modern Family, The Office, Two and a Half Men and Psych. Peacock also is the exclusive home for next-day streaming of new episodes of NBC shows such as the #OneChicago trifecta, La Brea, the Law & Order franchise, Saturday Night Live and The Voice.