Two significant characters died in Sunday’s House of the Dragon: one of old age/overall infirmity and one of having his skull cleaved in two with a sword. How bizarre to find that I had a much harder time watching the former than I did the latter.

House of the Dragon‘s forebear, Game of Thrones, inured its viewers to a certain kind of on-screen violence; just when you thought the camera would pan away and save you from seeing a disgusting coup de grace… it instead zooms in. (And yes, I am thinking of when The Mountain gouged out Oberyn Martell’s eyes with his thumbs then smashed his head until it burst like a watermelon left too long in the sun.)

So while Vaemond’s murder by Daemon in Episode 8 (read a full recap) was shocking — the prince stood behind Corlys’ brother as he loudly renounced Rhaenyra’s sons as bastards, and we didn’t see what was happening until Daemon’s blade had already sliced halfway through Vaemond’s face — it was on par with what we expect from the viscerally violent Game of Thrones universe. 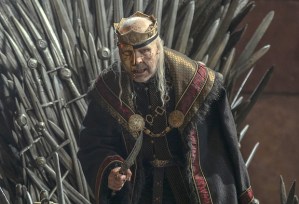 But we haven’t seen a lot of George R.R. Martin-created characters die of old age and/or overall ill health. So to watch Paddy Considine’s unwell Viserys wheeze, limp and rave through his final days in this week’s hour felt somehow more shocking than witnessing Vaemond’s brain pan get separated from the rest of his noggin in the space of a few seconds. If you’ve had the experience of watching a loved one battle a terminal illness, I’m guessing maybe you encountered some uncomfortable familiarity during the episode, as well? The indignity of the physical being as sickness consumes it. (By the way: Props to the show’s prosthetics, makeup and CGI departments — particularly for that gnarly ulcer in the king’s right cheek.) The moments of lucidity followed by episodes of sheer incoherence. The attempts — such as the king’s golden mask and the ever-present incense — to cover the unavoidable, nasty realities of a body shutting down.

In a show about dragons, I suddenly found myself encountering something far too real. It was hard to look at, head-on. Give me death by crazed White Walker any day.

And now that I’ve brought down the room significantly, a few more thoughts about Episode 8:

* That scene between Alicent and Rhaenyra, where the princess warmly promises she’ll return to King’s Landing on dragonback — what a stunning glimpse of what could’ve been, eh? Emma D’Arcy and Olivia Cooke conveyed so much in a very short exchange.

* I think Princess Helaena may be my new favorite character.

* I was struck by the way Alicent clearly felt for, yet ultimately did nothing to help, the serving girl that Aegon raped. I know the patriarchy’s gotta patriarchy, but the queen — who is, for all intents and purposes, ruling the kingdom with her father at the moment — should be able to offer a little more than a hug, some veiled threats and a bag of coins, right?