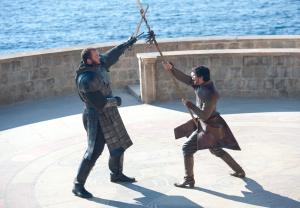 The battle for Tyrion’s life comes down to one moment of misplaced attention in this week’s Game of Thrones. But  is it The Mountain or the Red Viper who emerges victorious?

If you watched the pivotal episode, you know that even though it appears that Oberyn Martell is going to best Gregor Clegane and win freedom for the accused Lannister brother, an incredibly disgusting move at the last minute makes snake meat of The Viper.

THE MEN OF THE WALL | As she takes care of the wash and tries to evade the notice of a threatening (and gassy) whore, Gilly hears an owl hoot outside and starts to panic. She knows the call isn’t normal – and moments later, she’s proven correct when the wildlings storm Mole’s Town. Tormund, the Thenns and the rest of the gang get to stabbing, slicing and generally reducing the hamlet’s population to nothing. But when Ygritte finds Gilly and little Sam hiding, she spares their lives and warns them to keep quiet so no one else will find them. I knew you had a heart, Red!

Back at the Wall, Jon Snow and his disgruntled band of like-minded Night’s Watch brothers lament the carnage. They buck up a despondent Sam by pointing out that his doughy date already survived Craster, the march to the Wall and the white walkers: Who’s to say she didn’t make it through the assault alive? Meanwhile, Jon knows that the attack means that Mance Rayder’s army of thousands is close, and that the hundred or so men of the Night’s Watch are no match for it.

HOUSE TARGARYEN | While bathing in a river, a naked Grey Worm gets an eyeful of a naked Missandei, and neither is mad about the interaction. Later, Daenerys wonders why a eunuch would have any interest in what the linguist is workin’ under her robes, which leads to a prolonged conversation about whether the Unsullied’s castration procedures involved taking “the pillar and the stones.” Sadly, we get no answer to this musing; however, we do have the pleasure of witnessing the mother of dragons’ two underlings flirt in a stilted, halting, kind-of-cute way. He apologizes for eyeballing (eye-lack-of-balling?) her that morning; she apologizes for the mutilation he experienced as a child. He tells her it was worth it, if it meant that he one day would meet her. “I’m glad you saw me,” she asserts. “So am I,” he replies.

Later, Ser Jorah and Daenerys have a far less touching conversation after Ser Barristan intercepts Jorah’s royal pardon – signed by Robert Baratheon – and everyone realizes that the khaleesi’s right-hand man spied on her for the powers that be in King’s Landing. With tears in his eyes, Jorah admits to being one of Varys’ little birds for a time. “You betrayed me from the first,” Dany surmises, so troubled that she can’t maintain eye contact with one of her most trusted advisors. She casts him out of the city and warns him never to return, or she’ll toss his head into Slaver’s Bay. (Side note: Despite my sadness at seeing Jorah go, I do love how he’s the one quivering and crying, and she’s her normal kickass self. Ain’t no Mother of Dragons got time for that.)

HOUSE BOLTON | Ramsay coaches Reek to pretend he’s Theon Greyjoy again in an effort to let the Ironborn in command of Moat Cailin to surrender. The moat is so decimated – full of dead men, decaying horse corpses and sick soldiers spitting up blood – that it seems like Tickle Me Elmo could probably grab power with one furry, red paw tied behind his back. Anyway, Theon shakes and stumbles his way past the guards and eventually gets the men to acquiesce, promising them no harm will come to them if they do.

Just kidding, Ironborn soldiers! Ramsay flays his way through the place, taking control of it for his dad. Roose is so pleased to hear that his bastard has turned out to be handy for more than being a total creepster, he makes him a full-fledged Bolton.

HOUSE STARK: SO-CLOSE-BUT-YET-SO-FAR EDITION | Even the super-slick Petyr Baelish can’t escape the suspicion of some residents of the Vale, who question his story about Lysa committing suicide via Moon Door. They call his “niece,” Alayne, in to testify – and though it seems for a minute like she’s going to sell him out, Sansa completely backs his lie. Sansa’s performance is so compelling (the waterworks are a nice touch, though after all she’s been through, I can’t imagine the tears are ever very far from the surface) that the lords and lady buy her story and even indulge Littlefinger’s assertion that Robin should make a play for the Iron Throne.

Later, Baelish wants to know why Cat’s elder daughter chose to cast her lot wit him; she replies that it’s a devil-you-do situation, and at least she knows what he wants. “Do you?” he says, somehow upping his already astronomical perv quotient. And just when I don’t think I can be skeeved any more, I see the Baelish stares at his teenage obsession as they prepare to take Robin out of the Eyrie for the first time in his life. My eyes! (Maybe I should have saved that one for when we discuss Oberyn’s part of the episode?)

Outside, Arya and The Hound approach the Eyrie, only to be told that Lady Lysa died three days prior. Kudos to Maisie Williams, who absolutely nails Arya’s fit of hysterical laughter upon hearing the news. When your luck is so phenomenally bad on the regular, it is pretty funny.

HOUSE LANNISTER: MOUNTAIN-VS.-VIPER EDITION | Jaime and Tyrion spend some time together in Tyrion’s cell, reminiscing about a simple-minded cousin of theirs who spent all of his days crushing beetles in the garden. Peter Dinklage gives a pretty great monologue about how, as a child, Tyrion studied the brutish cousin for some hint at why he did what he did – and he never got to the bottom of the violence. Speaking of violence, those clanging bells mean it’s time for some really awful stuff: the youngest Lannister child’s trial-by-combat.

Much of King’s Landing has turned out for the match, which pits Tyrion’s champion Oberyn Martell against the Cersei-picked Gregor Clegane aka The Mountain. Oberyn wears little armor and seems far more preoccupied with quaffing wine and slipping Ellaria the tongue than with preparing for a battle to the death, a fact that worries Tyrion. But the Dornish prince assures him, “Today is not the day I die.” So he leaps into the arena with a flourish, giving a Princess Bride-reminiscent monologue about how The Mountain will pay for raping and killing his sister Elia.

For a while, it looks like the smack-talking preener is going to win. He slices at the Mountain, eventually getting him good in the belly and standing above the giant, final blow at the ready. But first, Oberyn wants him to confess everything he did to Elia and her family. And that pause is all Clegane needs to get the drop on the Dornishman.

He flips Oberyn onto his back, knocks out half his teeth, proudly states that he did a number of unconscionable things to Elia and her kids, then grinds his thumbs into the Red Viper’s eye sockets and eventually smashes his head like an overripe pomegranate. At least, I think that’s what happens. I admit, I cannot force my eyes to stay open during the scene. As the contents of Martell’s skull mingle with the dust of the arena, Tywin stands and proclaims that Tyrion will be sentenced to death for the murder of Joffrey Baratheon.

RIP, Oberyn. You were hot, snarky, sexy and overall pretty awesome, and I’d kinda hoped HBO was going to take a flier and mess with the events of the book on this one.