The week where we have to say goodbye to House of the Dragon’s Milly Alcock and Emily Carey and welcome in Emma D’Arcy and Olivia Cooke in the roles of the older Rhaenyra and Alicent, respectively.

Thank The Seven, D’Arcy and Cooke both slide seamlessly into the characters we already know, though both the princess and the queen have slightly harder edges now that a decade has passed between Episodes 5 and 6.

But the actress switch is really the smallest deal in this hour FULL OF DEALS, including Rhaenyra’s post-birth trek through the Red Keep and that end-of-hour revelation about how devious Larys truly is.

Read on for the highlights of Episode 6, then check out my thoughts on Larys’ game-changing move and Matthew Needham’s take on what his character is up to.

IT’S A BOY! | We hear D’Arcy’s Rhaenyra moaning before we see her, and when we do see her, she’s in exactly the spot she’s long feared: giving birth. She’s attended by septas and everything goes according to plan; she labors for a moment or two, then her son is born, and all is well. Rhaenyra looks happy and tired and sweaty as she cradles him to her, but the postnatal buzz is harshed when a servant arrives and announces that the queen wants the baby brought to her. So Rhaenyra rises to get dressed, and doesn’t even stop when she delivers the afterbirth standing, because there’s no way in hell she’s not accompanying her minutes-old son.

Laenor (now played by Chewing Gum’s John Macmillan) meets her in the hallway, joyful about their kid, perplexed by the queen’s request and unable to stop himself from asking a boneheaded question. “Was it terribly painful?” he wonders, and the look Rhaenyra gives him is GOLD. We get the sense that they are very much still friendly with each other; when she periodically has to stop and take a breath while her uterus freaks out in her abdomen, he begs her to turn around. But she presses on, even as everyone they pass stops to stare. “This is absurd,” Laenor says. And yet, they march on, running into Ser Criston (still Fabien Frankel) at his post outside the queen’s quarters.

Inside, the queen immediately notes that Rhaenyra should be resting. “I have no doubt that you would prefer that, your grace,” the princess shoots back. A startlingly old-looking Viserys enters and starts cooing over his grandson, whom Laenor announces will be called Joffrey, though that doesn’t seem to have been a joint decision. “I do believe he has his father’s nose,” the king notes,  and the LOOKS that pass among Alicent, Rhaeynra and Laenor are something. “Do keep trying, Ser Laenor,” Alicent whispers to the new dad before he leaves. “Sooner or later you might get one that looks like you.”

Trailing blood all over the hallway on their way back, Rhaenyra takes Laenor to task for naming the baby without consulting her. Then they visit their two other sons, who are hanging out with Ser Harwin and who have chosen a dragon’s egg for their little brother’s cradle. Speaking of LOOKS, there are some mighty significant ones that go between the princess and Ser Harwin “Breakbones” Strong, who is the commander of the City Watch. And the older boys certainly don’t have Laenor’s coloring. Hmmm. 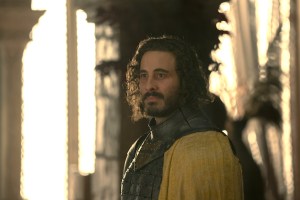 AN OPEN SECRET | Rhaenyra and Laenor’s older sons go through training in the dragonpit with Viserys and Alicent’s sons Aegon and Aemond. Aemond is the only one without a dragon, and the other boys mock him for it. So after they leave, he creeps down into the warren where the dragons live and almost gets flambeed for his troubles. When Alicent finds out, she wants Viserys to do something about Rhaeynra’s kids (even though Aegon was just as complicit in the taunting). Then she brings up the not-so-hidden secret that all three of Rhaenyra’s sons look nothing like their father. “Nature is a thing of mysterious works,” he says, but she won’t be swayed. So he flat-out says “Don’t speak of this again,” and she’s left to vent to Ser Criston. “The Princess Rhaenyra is brazen and relentless, a spider who stings and sucks her prey dry,” calling her a spoiled see-you-next-Tuesday before remembering that he’s talking to the queen — who, for the record, doesn’t seem bothered and definitely thinks the same thing. Also, Criston, honey? GET OVER IT. 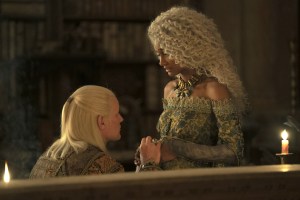 Elsewhere, in Pentos, Daemon and Laena (now played by Nanna Blondell) — who is pregnant — show off their dragons by riding them for a crowd. Later, at a dinner, the prince of Pentos makes them an offer: They’ll move to Pentos and get paid handsomely for it in exchange for lending their dragons to the cause when and if the need for war arises (which it looks like it might, because the Triarchy has allied with Dorne). Later that night, Laena is angry that Daemon is even considering the deal.

Laena eventually goes into labor. But things go badly, and pretty soon it’s clear that neither she nor the baby is going to make it. So because she’s an absolute badass, she limps down to where the dragons are kept and, in her bloody nightgown, orders her steed to “Dracarys!” her into the sweet hereafter. Daemon finds her just as the dragon does as ordered; the look on the prince’s face is hard to read. 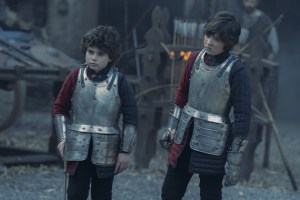 COLE V. BREAKBONES! | Back in King’s Landing, Viserys and Lyonel Strong watch as the king’s grandsons and sons train in the yard with Ser Criston. The knight treats Aegon and Aemond better than the other two, and when Harwin notices and mentions it, Criston has Aegon and Rhaenyra’s oldest son, Jace, battle. Jace is younger and much smaller than Aegon, though he hangs in there. It gets heated, with Harwin and Criston yelling at each other and Criston egging Aegon on to play dirty. Eventually, Strong steps in to stop Aegon from beating Jace into the mud, and Cole taunts him about it.

“Most men would only have that kind of devotion for a cousin, or a brother,” Ser Criston airily notes, “or a son.” And that’s when Harwin jumps on top of him and hits him over and over, to the point that others have to pull him off. When Lyonel yells at his son for putting them all in danger, Rhaenyra overhears everything — including his reminder of the very real threat that Harwin, the princess and their children could be exiled and/or killed if people find out the truth.

Rhaenyra is ruminating on all of this, as well as dealing with a very sore chest thanks to nursing woes, when Laenor and a friend burst in, drunken and singing loudly. The friend leaves when Rhaenyra asks, and Laenor goes on and on about how excited he is at the possibility of war and of being able to head out to sea again. She’s like DUDE. STOP. PEOPLE ARE SAYING NOT-GREAT STUFF ABOUT US. And she adds that he’s sorely mistaken if he thinks their son’s “true father” is going to abandon them “to go carousing through the Narrow Sea, waggling his sword and winking at his sailors.” He counters that he has played his part “faithfully, for 10 years” and thinks he’s owed something. “You do not desert your post when the storm lashes,” she says, and when he doesn’t agree, she commands him to remain in King’s Landing “and at my side.” 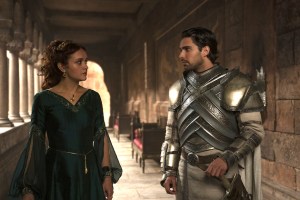 WHERE THERE’S SMOKE | At the end of a subsequent small council meeting, Rhaenyra stands to speak. “I have felt the strife between our families of late, my queen, and for any offense given by mine, I apologize. But we are one house, and long before that, we were friends,” she says. Then proposes bethrothing her son Jace to Alicent and Viserys’ daughter Helaena. But then the princess’ breasts start visibly leaking through her dress, derailing the whole endeavor. Alicent says they’ll consider the matter and everyone leaves, averting their eyes from Rhaenyra’s torso.

“How sweetly the fox speaks when it’s being cornered by the hound,” Alicent tells her husband afterward, but he’s excited about the proposal. “You may do what you wish, husband, when I am cold in my grave,” she responds. Their conversation is interrupted when Hand of the King Lyonel Strong appears to resign his post, given what happened in the yard with son Harwin. The king says Harwin has been ousted from the City Watch, and isn’t that enough? “Forgive me, your grace, but it is not,” Strong says. “There is a shadow over my house, and it grows ever darker. I can no longer serve you with integrity.” Viserys urges him to name said shadow, and Alicent nearly drools over getting Rhaenyra’s affair on the record. But Strong won’t put a fine point on all of it, to her extreme dismay, and therefore Viserys won’t accept his Hand’s resignation.

ONE LAST STAB | Alicent takes an emotional lap around the castle before returning to her quarters for dinner with Lord Larys, Lyonel’s other, gossipy son. They discuss the Hand of the Kign’s attempted quitting and Viserys’ “willful blindness.” The queen muses about how her father, the former Hand, wouldn’t hesitate to tell Viserys the truth, were he still around. Larys points out that even Otto wouldn’t be impartial. “No, but he would be partial to me!” she cries.

Next, we cut to a dungeon full of men sentenced to death. Larys offers them “mercy” if they go along with his plan, but we don’t hear the particulars. And the next thing we see, one of the prisoners is voluntarily having his tongue cut out.

On a morning soon after, Harwin bids his farewell to Rhaenyra and the children; the princess barely holds it together as her lover kisses the infant’s head. When he leaves, she tells the boys, “We’ll exchange letters by raven! It’ll be fun!” But all Jace wants to know is whether Breakbones is his dad. A ruffled Rhaenyra says he and his brothers are Targaryens, and that’s that. But not long after, she finds Laenor training in the yard with his new object of affection and announces that they’re leaving for Dragonstone. Oh, and she’s cool with his plus-one.

“Bring him,” she says, nodding toward Laenor’s sparring partner. “ We’ll need every sword we can muster.” When the family eventually decamps, they’re observed by three of the prisoners Larys addressed earlier, all wearing cloaks and a bee brooch that matches the one in Larys’ cane

The Bee Bros also are present in the aftermath of when Harwin and Lyonel — and many others — are killed in a fire at Harrenhal. When she hears the news, Alicent is horrified to find out what Larys has made happen. But he seems rather unbothered after murdering his father and brother. After all, “I feel certain you will reward me when the time is right,” he says