The Goldbergs‘ Season 10 premiere kicked off with Murray Goldberg’s well-spoiled demise. So, how exactly did the ABC comedy handle the passing of Jeff Garlin’s cantankerous alter ego? 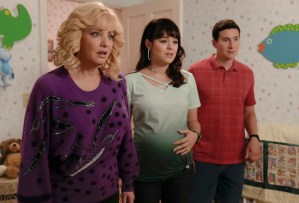 The Powers That Be could have gone in any number of directions. Murray could’ve been pushed in front of a train in Paris and exploded like a balloon full of meat. Or he could have succumb to a previously unknown drug addiction. Heck, he could’ve been offed via kung fu coupon — there’s precedent!

But instead, The Goldbergs chose to sidestep the specifics of Murray’s death. The cold open only disclosed that Murray was no longer with us.

“Just a few months ago, out of nowhere, we lost my dad,” Adam said, as the camera honed on his father’s beloved BarcaLounger. “We will always love you, Dad. Always. And we’ll find a way to continue on together. Because, after all, we’re the Goldbergs.” 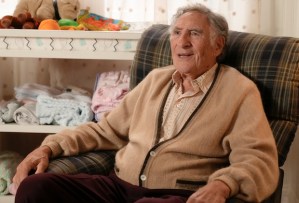 Mr. Chair turned out to be a focal point in Wednesday’s season opener. Mom-to-be Erica suggested that it was time for Beverly to clear out some of Murray’s belongings — including the hallway closet that served as a shrine to her dearly departed “Mur-man.” But Bev took her Schmoopie’s advice too far and got rid of his recliner — a decision she’d immediately come to regret. Luckily, Pop-Pop retrieved it from the curb before it got hauled away. He even took it upon himself to convert it into a rocking chair for the nursery.

Adam, meanwhile, attempted to pull a Field of Dreams on older brother Barry. But having misunderstood the Kevin Costner classic’s central premise, Adam didn’t realize that he’d convinced dimwitted Barry that he’d get to play one last game of catch with their dead dad. In the end, Adam and Barry made up and played that game of catch together.

Were you satisfied with how The Goldbergs handled Murray’s death? Grade the Season 10 premiere via the following poll, then hit the comments with your thoughts.