It’s been a while, but it’s time to go back Inside.

After more than five years’ absence, new episodes of Amy Schumer‘s sketch series Inside Amy Schumer will premiere on Paramount+ on Thursday, Oct. 20, the comedian announced Tuesday via social media.

Season 5 will consist of five episodes. Two will begin streaming on the premiere date, with the remaining installments released weekly.

Inside Amy Schumer last aired in 2016 on Comedy Central. Schumer stepped away from the show after Season 4 to focus on her film career, but her contract called for her to produce additional episodes of the series. Season 5 consists of those episodes, which originally were announced as “specials.”

As part of the announcement, Schumer created a note to fans: 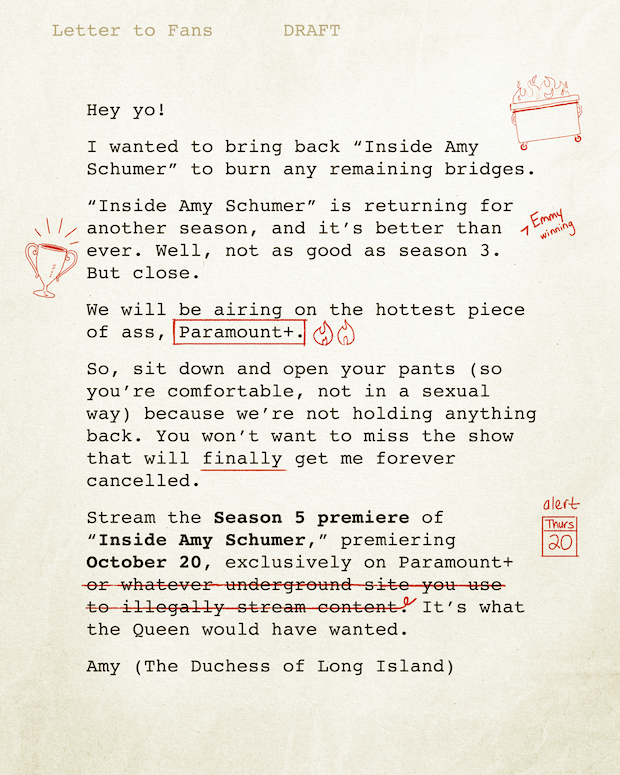 During its four seasons on the air, Inside Amy Schumer was nominated for 12 Primetime Emmys, ultimately winning three for Outstanding Original Music and Lyrics (2015), Outstanding Variety Sketch Series (2015) and Outstanding Directing for a Variety Series (2016).

In addition to the movies she’s made (Snatched, I Feel Pretty, The Humans) since Inside last aired, Schumer’s interim TV work includes Life & Beth, which Hulu recently renewed for Season 2, and the pandemic project Amy Schumer Learns to Cook at Food Network. She’s also going to star in HBO Max’s unscripted series Amy Learns To… in which she will learn “a new skill, craft, or trade from a local expert in [husband Chris Fischer’s] hometown on Martha’s Vineyard,” per the official synopsis.

Will you watch Inside Amy Schumer Season 5? Hit the comments and let us know!