In the original Quantum Leap series, which ran from 1989 to 1993 on NBC, Herbert “Magic” Williams (played by Christopher Kirby) was just a soldier in the Vietnam War when Samuel Beckett (Scott Bakula) leaped into him in the Season 3 episode “The Leap Home, Part 2 (Vietnam).”

Decades later, NBC’s upcoming revival — premiering Monday, Sept. 19 at 10/9c — now finds Magic (played by Ernie Hudson) heading up the rebooted Quantum Leap project with the hopes of understanding the mysteries behind the machine, and the man who created it. 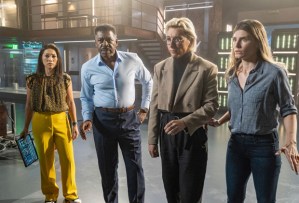 “[Magic] spent pretty much all of his adult life in the military and found out about this project that had been shut down for a while, and worked hard to get it up and running,” Hudson tells TVLine. “He’s a guy who sees the potential of what it can do, not just for the government, but also for mankind. He really is excited about it.”

Everything changes when physicist Ben Song (Kevin Can F**k Himself‘s Raymond Lee) also makes an unauthorized jump through time, leaving the rest of his team wondering why he did it. His confused cohorts include Addison (Caitlin Bassett), a decorated Army vet who appears as a hologram only Ben can see and hear; Ian Wright (Cowboy Bebop’s Mason Alexander Park), who runs the Artificial Intelligence unit “Ziggy”; and Jenn Chou (Bosch’s Nanrisa Lee), who leads digital security for the project.

“[Ben’s jump] creates many complications,” Hudson notes, “just in terms of threatening the project.” Plus, Magic is the one who has to take the heat from his bosses at the Pentagon, who are invested in the project.

“Magic is in charge, but he’s also having to do a lot of dancing to make sure this thing stays afloat,” the actor adds. “And one of the things that was really important to Magic was Sam. He never made it back. He would love to get him back.” (Whether Bakula’s Sam Beckett will appear in the show remains to be seen, but the invitation is out there.)

And now that there’s another person in the throes of space and time, Hudson says that “the challenge is how do we control that? There’s a lot going on with [Magic].”