Quantum Leap will jump back into action this fall with a new team that includes Ernie Hudson’s Herbert “Magic” Williams — but could a familiar face be joining him?

Premiering Monday, Sept. 19 at 10/9c on NBC, the reboot takes place 30 years after Dr. Sam Beckett (played in the original series by Scott Bakula) stepped into the Quantum Leap accelerator and vanished. A new crew led by physicist Ben Song (Kevin Can F**k Himself‘s Raymond Lee) has been assembled to restart the project in the hopes of understanding the mysteries behind the machine and the man who created it.

But with Sam lost somewhere to time, the question remains: Will Scott Bakula appear as Sam? Hudson isn’t sure.

“I’ve always appreciated his work. He was wonderful in the [original] series and everything I’ve seen him do,” the actor tells TVLine. “Everybody that I know involved in [the reboot] would love to see him return. I know the invitation is out there, but I don’t know what his response is.” 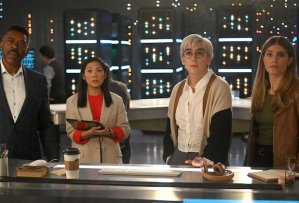 Bakula starred as Sam in the original Quantum Leap series that aired on NBC from 1989 to 1993. In the series finale, Sam went back in time to tell his former love Beth that her husband Al was still alive — which he chose not to do the first time out of fear of altering the timeline — to make things right. In the end, Beth and Al remained together and had four children. Sam, meanwhile, never returned home and remains somewhere in the flow of time.

The reboot finds Ben making an unauthorized leap into the past, leaving the team behind to solve the mystery of why he did it. At the helm of the highly confidential operation is Magic (Hudson), a no-nonsense career military man who must answer to his bosses who won’t be happy once they learn about the breach of protocol.

Addison (Caitlin Bassett), who appears in the form of a hologram only Ben can see and hear, remains at Ben’s side during each jump. The rest of the team includes Ian Wright (Cowboy Bebop‘s Mason Alexander Park), who runs the Artificial Intelligence unit “Ziggy,” and Jenn Chou (Bosch‘s Nanrisa Lee), who heads up digital security for the project.

How are you feeling about the upcoming Quantum Leap reboot? Are you hoping Scott Bakula returns as Sam Beckett? Let us know your thoughts in the comments.