As Game of Thrones drilled into us, House Lannister always pays its debts. But who knew that watching one of Westeros’ vaunted families incur one of those obligations — in social capital if not actual coin — would be so entertaining?

House of the Dragon‘s third episode on Sunday gave us a good look at Lord Jason and Ser Tyland Lannister, twins who are the ancestors of Thrones‘ Tywin, Cersei, Jaime and Tyrion Lannister. And, in Jason’s case at least, the hour made a good case for the genetic origins of arrogance, smarminess and the inability to shut one’s trap. (Read a full recap here.)

Props to Vikings alum Jefferson Hall, who plays both siblings, for his range. Ser Tyland seems like an upright, or whatever passes for upright on this show, knight who is genuinely concerned for the realm. And his brother, Jason, seems like a giant jackass. Hall made several acting choices as Jason that had me chuckling — no small feat in an episode that featured the bloody death of a wild pig and an even bloodier bifurcation of a notorious warlord.

I still can’t decide whether it was more entertaining to watch Jason trying to put the moves on Rhaenyra (the way he so clearly thinks he’s being slick! the way he so clearly is NOT!) or to see him have his smug butt handed to him by an irritated King Viserys during the gifting of the spear. Now that’s a debt he’ll have to work hard to shore up. Along those lines, a few thoughts: 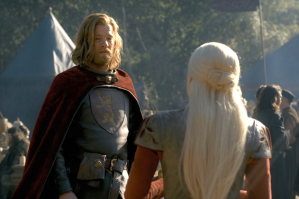 * Even in a series where families are REALLY into their sigils, isn’t House Lannister a little… extra about it? (Loved the show’s nod to that with Rhaenyra’s line upon Jason introducing himself: “I gathered that from all the lions.”)

* Did you notice Rhaenyra’s little eyeroll when Jason bragged about how the finest honeyed wine in all the land is made in Lannisport? First: hilarious. Second: It made me compare Rhaenyra’s give-no-effs attitude, especially in expressing exactly what she thinks in the moment, to the guarded, diplomatic way Alicent moves through the episode, particularly in relation to Viserys.

* And while we’re on this riff, I’m going to make like your fourth-grade English teacher: For this assignment, please compare and contrast either a) Rhaenyra’s sensitive comment about hating the way boars cry like children when they’re slaughtered and her quick-thinking, brutal actions when the pig attacks her and Ser Criston, or b) The way Jason — who apparently can’t hide anything he’s thinking, either — looks at Rhaenyra during his flirtation versus the horror with which he stares at her when she marches, bloodied, back to camp. Bonus points if you manage to work in an examination of the growing friendship (and more) between the princess and Ser Criston. (And those who are familiar with George R.R. Martin’s Fire & Blood, please don’t spoil it for the rest of the class.)