Daemon gets a little crabby at the end of this week’s House of the Dragon, and his impetuous burst of violence turns out being good news for the conflict in the Stepstones (but spectacularly bad news for the Crab Feeder, his men and one very unfortunate messenger from King’s Landing).

Speaking of the Red Keep, Rhaenyra divides the hour between giving her dad an expertly deployed stinkeye and getting close to Ser Criston Cole. One of those two activities ends with blood — in a moment, we’ll get into which.

For now, read on for the highlights of “Second of His Name.”

UPDATE FROM THE FRONT | We open on a ship being burned at night; the scene is hellish. “House Velayron is coming for you!” a man yells at his masked attacker, who is nailing him to a post. That attacker, as we’ve glimpsed in flashes before, is the Crab Feeder, and he unleashes a bunch of his namesake crustaceans on the nailed man, who curses him the whole time. But then: A dragon swoops in, horking up fire all over the scene, and the crab-feedee gets very excited… until the beast lands and one of its feet inadvertently stomps him into a paste.

Daemon is piloting the dragon, aka Caraxes. As men scatter in fear and try not to get flambeed, Daemon taunts the Crab Feeder (he calls him Drahar) and winds up taking a fiery arrow in the shoulder before Caraxes hauls tail out of there.

FAST-FORWARD | Meanwhile, at King’s Landing, we’re roughly three years after the events of the previous episode. Viserys and Alicent have already had a son, named Aegon, and she’s pregnant with their second child. News of the Crab Feeder’s dominance arrives on Aegon’s second birthday, and Viserys doesn’t want to hear about how Daemon’s forces are starting to doubt his leadership, and how it’s probably a good time for the Crown to step in officially. “Daemon and the Sea Snake started their war without His Grace’s leave. Were he to intervene now, after so long, it would make the Crown appear weak,” Otto Hightower observes. But all Viserys truly cares about is where an absent Rhaenyra is.

Alicent finds the princess reading under the weirwood, and it’s quickly clear that they’re no longer the best of friends — though it seems like Alicent, at least, wishes they still were. Rhaenyra only joins a celebratory hunt in the Kingswood because she is commanded to do so, and she’s frosty to her father when he tries to draw her out. (Maybe talking about how she’ll be married and pregnant herself soon enough wasn’t the best tack, dude.)

As Rhaenyra is walking through the festivities, she catches the eye of a man who formally introduces himself a while later. “Lord Jason Lannister,” he says. “I gathered that from all the lions,” she shoots back. (Ha.) He’s as arrogant as Game of Thrones‘ Season 1 Jaime, talking up Casterly Rock and all of the “means and resources” at his disposal. And he’s slick, too: When he brings up how he could easily build a dragonpit, she wonders why he’d need one. “I’d do anything for my queen… or lady wife,” he says slyly, which I think is this era’s equivalent of “That dress looks great. It would look even better on my bedroom floor tomorrow morning.” It’s also too much — she immediately confronts her father about trying to wed her into House Lannister, and he gets very angry very quickly when she says she doesn’t want to marry anyone. 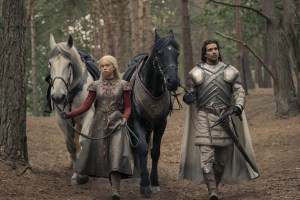 In her frustration, she quickly mounts a horse and rides off; Ser Criston Cole sees her and hurries to follow as she gallops through the woods. When they eventually stop, she vents. He jokes about killing Jason Lannister. It defuses her tension, and she suggests a leisurely stroll through the Kingswood. She complains about being “toothless,” but he says that her choosing him for the Kingsguard was the highest honor his family had ever seen. “All that I have, I owe to you,” he says. “Now, I’d hardly call that toothless, Princess.” Related: I like him a lot. 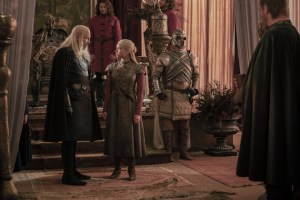 VISERYS DRINKS AND THINKS | While this is going on, King Viserys and a lot of the menfolk are on the trail of a white hart, which is believed to be a good omen for Aegon’s name day. Jason Lannister sleazes up to the king during one of the meals and is like, “Here’s a giant poking device I fashioned” to kill the hart, then segues into how he assumes Rhaenyra will no longer be Viserys’ heir now that Aegon exists. Viserys quickly tells him to hush up — and to make sure to let it be known that anyone else who assumes the same will be considered mutinous.

Otto then sidles up to his monarch and makes a heinous suggestion: Wed Rhaenyra to Aegon — yes, 2-year-old Aegon, her half-brother — and kill two blonde birds with one incestuous stone! Viserys laughs in his face, sends him away, and then drinks all the wine in the place as the evening goes on. Out in the woods, Criston has built a fire and taken off his armor, because the princess shows no indications that she’s going back to the party. A boar approaches out of the surrounding darkness and attacks them; Criston takes it down, but when it won’t go quietly, Rhaenyra grabs her dagger and makes pulled pork of the pig, sobbing as she frantically stabs.

Back at camp, Drunk Viserys staggers out to the bonfire and, when Alicent finds him there, sobs about how his obsession with his dream/prophecy killed Queen Aemma. “I thought Rhaenyra was the way out of my abyss of grief and regret, and naming her heir would begin to set things right,” he says, near tears and… startlingly in touch with his emotions for a man of this age? Alicent tries to comfort him but it’s like she’s not even there, and then the horn sounds — indicating that the hart has been cornered — so the inebriated king stumbles off to kill a deer.

But it’s not the white hart that his men have tied up in the forest. It’s a large, brown stag instead. The king ends its life it with the Lannister Poking Device, and the animal suffers before it dies. Viserys looks incredibly Not Into This as he turns away from the animal and all of his toadies applaud the anticlimactic kill.

The actual white stag? The one whose appearance is supposed to foretell greatness or something along those lines? It appears before a bloodstained Rhaenyra and Criston that morning, and when the knight pulls his blade to kill it, she stops him with a gentle, “No.” The animal runs off. Make of that what you will.

ALICENT SUBTLY PULLS STRINGS | When everyone returns to the Red Keep, Otto visits Alicent and not so subtly predicts the end of the realm if Rhaenyra actually becomes queen. However, if little Aegon were to ascend the throne… She reminds him that everyone swore obeisance to the princess, “our house among them.” But he’s still banging the gong hard for the boy to become ruler one day, and advises her to guide Viserys so that he comes to the same conclusion. For the record, I am a big fan of how Emily Carey is playing this scene, as though Alicent is distracted by her physical discomfort and would do just about anything to ease the bodily burden of her late-stage pregnancy. “Yeah, sure, I’ll back whatever king you want, but for the love of the Seven will SOMEONE PLEASE DIG INTO MY LOWER BACK WITH THEIR ELBOWS?”

Anyway, she makes her way to chat with the king, who’s hungover as heck and lamenting the fact that Jason Lannister wasn’t a good fit for Rhaenyra. He’s also had a letter from the Sea Snake’s brother, asking the king for aid because Daemon and Corlys are losing their war. Viserys is not inclined to help, pointing out that the two men started the war out of spite, but she frames it a different way: “Is it better for the realm if the Crab Feeder thrives, or is vanquished?”

So he sends aid. And shortly after, he gets into an argument with Rhaenyra. She knows that her half-brother has made her throne ascendancy unnecessary, and she resents that she’s now just a pawn to be married off for political gain. “I do not seek to replace you, child,” he says. “I wish to see you contented, happy even.” So he tells her to make her own match, finding someone she will love the way he loved Queen Aemma. Then, just before she leaves, he swears to her — “on your mother’s memory” — that she won’t be supplanted in the succession to the throne. Why do I feel like Viserys’ mouth is writing checks his platinum rear can’t cash? 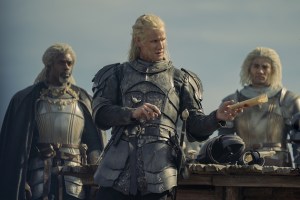 LAST-MINUTE SWITCHEROO | Let’s check in on the Stepstones, where Corlys’ brother is near-mutinous and blaming Daemon for the Crab Feeder’s nearly assured victory. And when a messenger arrives with news of Viserys’ imminent help, Daemon beats the poor guy. Then he rows himself out into the Crab Feeder’s territory, rips off a piece of white fabric that’s handy, and surrenders to the Crustacean King rather than accept his brother’s assistance.

As Daemon kneels and offers up his sword to the Crab Feeder’s men, it seems like that’s that. But at the last minute he dreams a blade from somewhere else on his person and goes straight for The Big Rangoon himself. Hundreds of fighters shoot arrows at him. Others come for him with knives of their own. But Daemon manages to run through them all with nary a scratch on his demented face. Not since the Battle of the Bastards has one man evaded this sheer amount of certain death. How is no one hitting him? 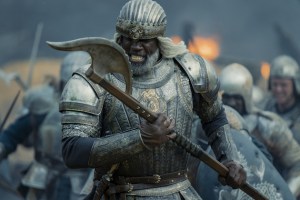 Oh wait, I spoke too soon. Eventually he gets arrow’d! In a few places, including the chest. King Crab’s men swarm, ready to finish the Targaryen off, but just then Corlys, the rest of their men and the dragon — piloted by Corlys’ son Laenor — arrive and attack. As they’re slicing and dicing in bloody fashion, Daemon follows the Crab Feeder into his cave. And when he exits, he’s dragging the disemboweled warlord’s torso behind him.