In addition to revealing that Bruce Banner/Smart Hulk has unfinished business to tend to on Sakaar — which in turn would seem to plant a seed for some sort of Planet Hulk/World War Hulk movie — Episode 2 of Disney+’s She-Hulk slipped in a couple of other MCU nods, by way of a singular website page.

Early on in the Aug. 25 episode, titled “Superhuman Law,” Jen Walters (played by Tatiana Maslany) learns that she is being let go from her job as ADA, in the wake of her “hulking out” in the course of trying a case. The conventional wisdom is that Jen’s new superpowered status will only taint juries one way or another, as evidenced by the case she was poised to win last week being nullified by a declaration of a mistrial.

After a series of sad job interview snippets, a glum Jen resorts to visiting a website that suggests “Offbeat Jobs for a Fresh Start.” If you look at the top two “Related Articles” on the right side, the first one is titled, “Man fights with metal claws in bar brawl” — hinting, of course, as the mutant known as Wolverine. And if Doctor Strange 2 and then Ms. Marvel have told us anything, it’s that the X-Men (or whatever name thay will wind up being called) are now a part of the MCU, following Disney’s 2019 purchase of Fox, which had dibs on Professor X et al. 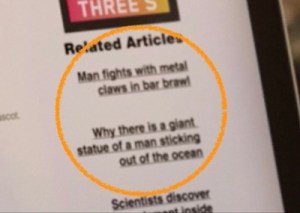 The other Related Article is titled, “Why there is a giant statue of a man sticking out of the ocean,” which sure would seem to be echoing a highly valid question raised by the ending of Marvel’s Eternals, which left a petrified being jutting out of the Indian Ocean. (No spoilers here.)

This week’s episode also drove home that which head writer/EP Jessica Gao told TVLine, that She-Hulk is set not too long after Shang-Chi and the Legends of the Ten Rings, seeing as the closing scene revolves around the reveal that Emil Blonksy’s Abomination once broke out of prison to participate in a fight club. You can count on getting more details about what exactly that was all about in Episode 3…..