Warning: This post contains spoilers from The Sandman finale.

In The Sandman‘s fourth episode, Morpheus ventures to Hell and comes face-to-face with Lucifer. The Lord of The Dreaming is looking for a magical helmet that was taken from him years before; long story short, one of Hell’s denizens has it, and Morpheus must do metaphysical (and, well, physical) battle to get the coveted object back. His opponent? The Princess of Darkness herself.

The fight gets gnarly, and at one point, it looks like Morpheus is a goner. But after an emphatic pep talk from Matthew the Raven, Morpheus rises and bests Lucifer — who doesn’t take the loss well.

“One day, Morpheus, we shall destroy you,” she threatens. “Until that day, Lightbringer,” he says in parting as he saunters away, victorious.

And then we don’t see Lucifer again until the season finale… in which it’s revealed that she’s clearly been stewing about the matter in the meantime. (Read a full recap.) Gwendoline Christie plays the fabulously infernal character in Netflix’s adaptation of Neil Gaiman’s beloved graphic novels, and when TVLine chatted with the Game of Thrones alum, we started by asking for her input on what Satan does to self-soothe. 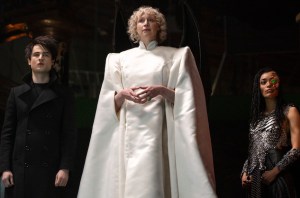 TVLINE | How does Lucifer lick her wounds after losing so badly to Morpheus? We don’t see her for a while. What does self-care look like in Hell?
Self-care in Hell. [Laughs] Well, it clearly involves a red satin robe. It’s time to really relax. Any kind of corset, control underwear, shapewear is discarded. We’re straight into the robe, and I think she’s kind of probably taking out a lot of passive aggression on Mazikeen. Thankfully, Mazikeen seems to have infinite patience, and perhaps even enjoys it? And there’s been plenty of, I would imagine, storming down those marble corridors, swearing, screaming at demons, staring into the fire and plotting the ultimate revenge.

TVLINE | I do love that you have, for the record, established that shapewear is hell. All kidding aside, we see her at the end, wanting revenge on Morpheus. What is that like for a being of her power?
I think it’s entirely consuming because if you think of Lucifer, Lucifer was God’s favorite, and that’s the most privileged position that any thing can ever be in. And then to be rejected and cast out from that, to live with that rejection and the humiliation of that and all of the shame that goes with it? I feel that Lucifer has to just make it work, and consequently has to take an enjoyment, but possibly a superficial enjoyment, in that torture. I think that Lucifer is really quite bored of having to torture the masochists. There’s not really anywhere to go. The masochist is always ultimately the one in control, and I think that being overpowered by Dream is the final insult, actually.