Thanks to the dream vortex, both the waking world and the dream realm are in serious danger of becoming one nightmarish mess as The Sandman’s Season 1 finale gets underway. So… was Morpheus able to put things right? And did he have to kill a sweet young woman in order to do so? Read on for the highlights of “Lost Hearts.”

Morpheus confronted The Corinthian during his keynote speech at the cereal serial killer convention, but when he tried to undo his rogue nightmare, The Corinthian stabbed him through the hand. As Morpheus looked in confusion at his bleeding hand, the killer explained that Rose — aka the dream vortex — was getting stronger and was poised to take Dream’s spot at the center of The Dreaming. What’s more, she was causing everyone to dream the same dream, and it was a bad one.

When Morpheus tried to wake her up, The Corinthian followed him into Rose’s sleeping mind. But she got sick of them each trying to sway her to their side, and decided that she was going to do things her way — which left Morpheus and his creation to face off. Apologizing for creating him poorly, but maintaining that the rules of The Dreaming must be maintained in order for the world to continue as it is, Morpheus uncreated The Corinthian right there in the hotel ballroom.

As the audience woke up, Morpheus addressed them, saying he was taking away their dreams of always being in the right. What’s more, he cursed them with the knowledge of exactly how monstrous they were — leading them to confess to their crimes, kill themselves and otherwise realize how terrible they’ve been. While that was happening, Rose and Jed left the hotel. A call from Lyta brought Rose and Jed to the hospital: Her rapidly moving pregnancy was at its end, and she was about to have the baby. 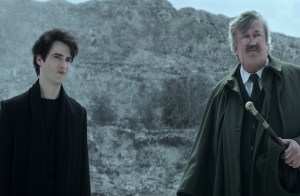 That night, when Rose fell asleep, she dreamed of Hal doing a duet with his drag self. But that dream dissolved into the mashed-up dreams of her housemates Chantal, Barbie, Ken, which then turned into a powerful, sucking vortex. Morpheus then appeared to her and informed her that no one was safe “until the vortex is dead.” Then Gilbert showed up, outing himself as a dream, and offering his life in place of Rose’s. Buzzkill Morpheus said that couldn’t happen, but didn’t punish Gilbert to return to his place in The Dreaming as Fiddler’s Green. “I was not a person, I was a place,” he explained to Rose, inviting her to visit if she died and stayed in The Dreaming. “Farewell, Rose Walker. It was a privilege being human with you,” he said, just before turning into a whirlwind of leaves, flowers and trees.

In England, Unity Kincaid slept and dreamed of being in The Dreaming’s library. “I want to read about my unlived life,” she told Lucienne. Soon after, Unity and Lucienne showed up near Rose and Morpheus, and Unity made a case for her dying instead of Rose, given that she should’ve been the vortex in the first place. And after Rose reached inside herself and gives her great-grandmother her vortex-hood, it was a done deal: Unity died so that Rose could live. Rose woke up to find that Lyta has had a boy. 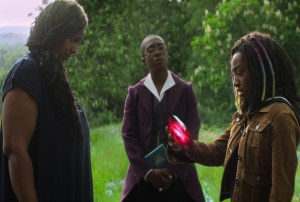 Before she went, though, Unity made a comment about the “golden-eyed man” who impregnated her, and that bit of intel grabbed Morpheus’ attention. He summoned Desire — who happens to have golden eyes — for a meeting. Dream confronted his sibling, who engineered the whole ruse so that Morpheus would kill Rose, inadvertently spilling family blood “and all that would entail.”

“Mess with me or mine again and I shall forget you are family,” Morpheus threatened Desire, hinting that Death and Destiny would side with him were a family civil war to break out. After he left, though, Desire vowed to “draw blood” the next time they tussle.

So how does it all wrap up? Morpheus recreated Gault as a dream, rather than a nightmare. He also formally asked Lucienne to take care of The Dreaming while he’s otherwise occupied. (“With pleasure,” she responded.) Rose lived with Jed, Lyta and Hal, and she wrote a book. And down in Hell, Lucifer gave Lord Azazel the go-ahead to have his armies of the damned invade The Dreaming. Later, Mazikeen wondered what the Morning Star is planning.

What did you think of The Sandman‘s finale? What about the season as a whole? Grade both via the polls below, then let loose in the comments!