The Orville‘s own Penny Johnson Jerald did tell TVLine that most every episode of Season 3 would give people something to talk about. And sure enough, in recent weeks alone the space adventure series has addressed the issues of suicide, abortion, and gender reassignment.

In fact, the June 23 episode’s exploration of abortion — including how the Krill aggressively seek to deter the practice (read recap) — aired the day before the Supreme Court reversed Roe v. Wade, ruling that the constitutional right to abortion no longer exists.

As The Orville cruises into the second half of its freshman Hulu run (starting this Thursday), TVLine spoke with series creator/”captain” Seth MacFarlane about the heavier issues being covered, Season 3’s Black Mirror inspirations, and whether the sci-fi series is in fact less “funny” than fans seem to remember.

TVLINE | That was quite a thing, your Krill/abortion episode landing a day before SCOTUS overturned Roe v. Wade.
Yeah, that was an interesting and unfortunate coincidence. I think we wrote that script two years ago…? And of all times for it to land, it was pretty insane.

TVLINE | That said, the episode didn’t quite suggest that in the distant future, Roe v. Wade is still precedent.
There’s a great essay that was written by Carl Sagan and Ann Druyan in the ’90s, specifically about Roe v. Wade, and I would sound like an idiot if I tried to paraphrase it here. But it was written from a scientific perspective, really breaking down the biology of how abortion works and drawing the conclusion that the specifics of Roe v. Wade — just not the existence of it, but the specifics of it — were prudent and made a lot of a sense. It’s something that I always try to post on social media periodically when I think of it. 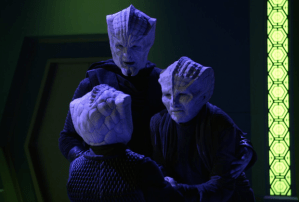 TVLINE | The Krill’s approach — introducing parents to a digital simulation of the kid they would have had — is pretty harrowing. Was that evoking any anti-abortion talking point that gets trotted out? That if you could meet your child, you might choose differently?
In some states you hear rumblings — if I were more educated as far as specific legislation, I could tell you which specific states — about the woman being forced to look at an ultrasound of her fetus before an abortion is allowed, which is pretty perverse. It’s a very bizarre concept, and you can imagine a future society looking at it, going, “Wow, what in the world is happening here?” When we wrote the episode, that was really the impetus for that wrinkle in their culture — how would a future society like Krill employ this kind of practice, with the technology of the future? This idea of extracting DNA and forcing the parents to sit and talk to “the child that could have been” seemed like a pretty potent science-fiction idea worth presenting. 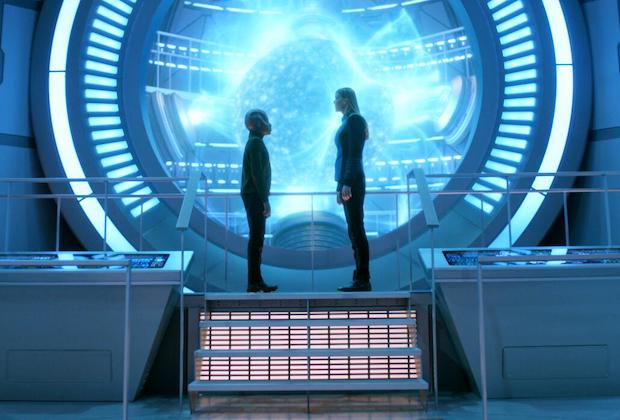 TVLINE | The episode that followed, meanwhile, very much snuck up on me, because it has been three years [since Season 2] and I had totally forgotten about the Topa storyline, and this latest beat was so powerful. We’re giving Imani Pullum a Performer of the Week honorable mention.
That’s great, man, she deserves it. For an adult actor, that would have been a huge challenge, and she just knocked it out of the park. Everyone was so impressed with her. It’s a testament to any guest actor on a show that’s in its third season, that if you can come on board and carry an episode and hold the audience’s attention and really establish your character with such force and such power, you’re doing something right. She was just fantastic.

TVLINE | Would the Topa storyline be playing out any differently on broadcast-TV?
It’s interesting, I don’t think that it would play out that much differently. I may be naive, but even if we were still on Fox, I feel like this story would still exist in its current form. I have my issues with Fox, but I can’t imagine anyone there censoring anything about this episode; I actually think they would have embraced it.

TVLINE | You just might need two episodes to cover the same territory you did in one on Hulu.
Yeah, it’s really about running time. The problem would have been chopping moments to pieces that really needed to breathe, because you have to fit everything into 43 minutes. That would have affected us negatively. 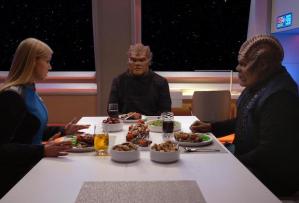 TVLINE | I was already surprised that Bortus and Klyden’s marriage survived the Season 1 trial. What does the future look like for them as a couple?
You know, I can’t spoil anything, but as of now it’s over. [The tension] has been building and building and building throughout the course of the series’ run, so they’re finished. The other shoe has finally dropped.

TVLINE | Was the Topa episode your longest one of the season?
I guess it was…? The whole change in running time and production style for this season actually came from the last season of Black Mirror, when they did those three shows that were like little movies. In particular, the Miley Cyrus episode, which I thought was fantastic, really felt like a little movie. It was good science-fiction, it was funny, it was entertaining…. I thought, “That’s what The Orville should be doing.” We’ve swung for the fences this year and whether it works or not remains to be seen, but so far so good. 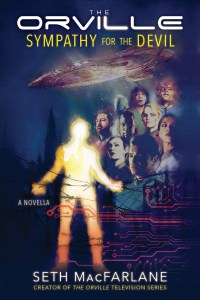 TVLINE | The episode that you couldn’t film for Season 3 and which will be released as a novella instead…. At the end of the day, was it simply un-filmable? Or is this another sign that there will be no Season 4?
It certainly was filmable. It was very experimental. It was a really cool science-fiction idea that we wanted to try. To me, a show like that was the whole reason you do TV instead of movies. If it doesn’t work, it’s one episode out of 10, but at least you tried.

How it will read in novella form is a good question, but I felt like if for some reason we don’t have a Season 4, it’d be a shame for that story to go to waste. If you had to cut an episode this season, that certainly was the one, but I do sometimes wonder if that was one of those things that was just bizarre and weird enough and fresh enough to have made a lot of noise. I guess we’ll never know.

TVLINE | I love what you’ve done with the show and how you pivoted away from the expectations ahead of Season 1, when we thought The Orville might be a send-up like Quark or Galaxy Quest. That said, is there any “funnier” episode coming up?
Yes. Yes. [Laughs] I know that’s a question people have asked a lot. Yes. The comedy has not gone away; most of it is in the second half of the [10-episode] season, but it is there.

It’s interesting, I went back recently and watched some of the episodes of Season 2, because i really wanted to remind myself of what we were doing that was so different. And with some exceptions, the tone really wasn’t that different. I think there’s a little bit of revisionist history going on sometimes. The “Identity” two-parter with Tala and the Moclan sanctuary, the episode with Rena Owen where she plays the female Moclan leader….. These are pretty dramatic episodes that are no different in tone than what we’re doing now. I think that because it’s been so long [since Season 2], there’s a bit of revisionist history.

I saw it happen with Family Guy. After we had gone away for two years and came back, people acted like the first two seasons were 50-year-old classics that we could never recapture the tone of. [Laughs] I was like, “Guys, it’s only been a couple of years. Relax.”