This week on The Orville, the Union’s looming treaty with the Krill took an unexpected turn, leading to the reveal of a major character’s unknown offspring.

The episode “Gently Falling Rain” starts out innocently enough, with Admiral Halsey reporting to Ed that, after regaling the Krill’s Supreme Chancellor Korin with a Broadway performance of Annie (haunting “Tomorrow” refrain notwithstanding!), the Krill are ready to sign the peace treaty with the Union, in their capital of Dalakos. And The Orville will provide transport for the Union delegation, which also includes President Alcuzan (guest star Bruce Boxleitner) and Speria Balask (the late Lisa Banes, to whom the episode was dedicated).

Thing is, a Supreme Chancellor election is brewing on Krill, and Teleya (returning guest star Michaela McManus) — who early in Season 2 seduced Ed as the human-looking Lt. Janel Tyler — has been rallying those who aren’t in favor of a peace treaty that threatens to dilute the purity of their culture, and might not even be needed (given the growing might of the Krill forces). And sure enough, just as Ed, Charly and the Union delegation arrive in Dalakos to sip some celebratory cider with Supreme Chancellor Korin, the unexpectedly close election results come in, and Teleya eked out a win. But you can forget about any peaceful transition of power let alone any proper recount, because guards immediately show up to haul Korin away and lock up his visitors, at Supreme Chancellor-Elect Teleya’s orders! 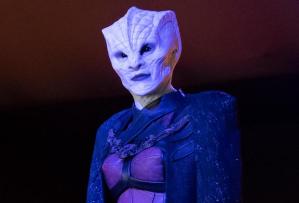 After the Union delegates spend some time in lock-up, Teleya summons for Ed, so that they can have a private conversation in which she basically gloats about hoodwinking him back in the day. Ed expresses his frustration over having set Teleya free after her ruse was revealed, thinking that their peoples had found some common ground — to which she laughs in his face. Having gotten the “closure” (as humans put it) that she sought, Teleya has Ed away led away by some guards, who unbeknownst to him are under orders to bring him back to his ship so that he can go free — Teleya’s way of repaying her debt. But before that can happen, the guards are sneaked up on and blasted by two other Krill, who whisk Ed away to a secret chamber, inside of which is a little girl who is clearly half human, half Krill. Meaning, Ed’s daughter! 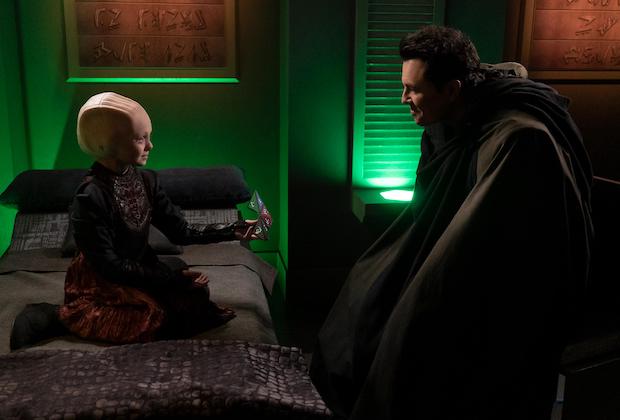 After Ed bonds some with sweet Anaya (whom a shamed Teleya keeps in hiding and has no contact with), he learns from the anti-Teleya coalition members that to make the child’s existence public might nudge her mother to reconsider the importance of a peace treaty. But Ed first takes another meeting with Teleya, revealing that he has met their daughter. When Ed questions why Teleya, who is so shamed by their mixed-species child, bothered having her at all, she chides the way humans sometimes terminate pregnancies. In fact, as she then demonstrates for him, if a couple attempts as much on Krill, the would-be parents are forced to meet a DNA-based, computer-simulated version of their child-to-be!

Anywho… Ed has botched his chance at freedom, and Teleya forges ahead with her plan to publicly execute the Union delegation party one by one, on a high terrace above the city center. But just as she chooses President Alcuzan as her first target and plunges a blade into his gut, two random Krill create a distraction on the terrace, blinding Teleya and her guards and whisking the Union members away. Loading everyone into a streetside transport, it is revealed that the two “Krill” are actually John and Claire, molecularly transformed as part of a “Directive 21” plot. What follows is a thrilling “car chase” through the rain-slicked streets of Dalakos, until they meet up with their cloaked shuttle and hit the skies.

Alas, the skies are none too friendly, as Kelly has rallied scads of fellow Union ships to meet The Orville above Krill and engage in a massive firefight. But as soon as the shuttle safely skids into the bay, The Orville et al quantum the hell outta there!

Regrouping back on Earth, Ed rebuffs Halsey’s suggestion that to “out” Anaya might pave the way for a new peace treaty, saying he wouldn’t put it past Teleya to make their daughter “disappear” first. Ed then privately shares with Kelly what a fast impression Anaya made on him — to which Kelly laments the two of them never got as far as starting a family. Meanwhile back on Krill, we see Teleya observing Anaya play in her room, with the almost-warm look of a mother….

What did you think of the episode “Gently Falling Rain”?