Warning: The following contains spoilers for The Boys Season 3, Episode 6. Proceed at your own risk!

“We had a lot of discussion this season about the scene with Deep and the octopus,” who are caught getting it on by Annie, Kripke tells TVLine. 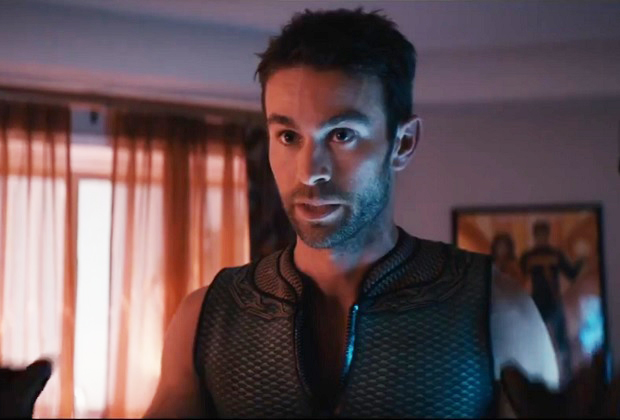 “For some crazy reason, Standards has a policy against bestiality. They’re so uptight, really,” Kripke says with a laugh. “The discussion of that scene and how we pulled off that scene actually triggered a lot of alarm bells at a lot of different levels at Amazon because you’re not supposed to show people f–king animals, and I get it. But my pitch to them was always like it’s so absurd [that] it wouldn’t be out of place in a Farrelly brothers movie. So it’s hard to call it prurient bestiality. It’s ridiculous. To my knowledge, I don’t even think octopi have orifices down there. So there was a lot of discussion of like what are the shots, and what can we do and what can we get away with?” (According to Prime Video’s X-Ray trivia feature, the scene was actually filmed with a puppet, then replaced with CGI by the VFX team.)

“But that was really the first time it ever became conversations where they had to run it up the ladder,” Kripke continues. In fact, according to the showrunner, The Boys is partially responsible for the streaming giant even having a Standards & Practices department, which is more typical of a broadcast network.

“I still remember the call, which [was] like, ‘Can you guys come in? Because we have to start a Standards & Practices department,’ in part because of us,” Kripke shares. “It was [our] Season 1 and then I think there was like one other show that caused a problem for them. I’ll wear it as a badge of honor that I helped start their Standards department.”

While The Deep’s sexy times with his mollusk friend raised eyebrows, nothing was excluded from the episode due to it being deemed too risqué, Kripke insists. Instead, certain ideas had to be cut purely because of time and money.

“We just couldn’t pull off all the gags we wanted to pull off,” Kripke laments. “I remember at some point there was discussion about some kind of aquatic, Creature from the Black Lagoon-type supe in the pool, having sex underwater. That was discussed at one point, and I don’t think we could pull that off. We were going to make a running joke out of these massive firehoses of fluid that get sprayed. There was going to be a female one that was going to get sprayed all over Hughie and that was going to be a running joke. Then we just sort of ran out of time, and so it all kind of combined to the one on poor Mother’s Milk.”

Given the sexually graphic nature of the episode, Kripke also notes that “several” intimacy coordinators were on set during filming and every precaution was taken to make sure everyone felt protected.

“Honestly, I was f–king terrified that whole shoot because you have so many actors who are nude and simulating sex,” Kripke admits. “The chances of something going really wrong were so scary to me that everyone from top down in the production said, ‘We have to be so correct about this and so professional and be like cops in every aspect of it to make sure that it’s a safe space for everyone.’ So we did.”

Kripke credits the intimacy coordinators and the show’s “brilliant assistant director [who was] very on top of it” with “just really making sure that everyone was comfortable and we were doing it right.”

The Boys fans, what did you think of The Deep’s sexual exploits? Grade the episode below, then hit the comments with your thoughts!