Did they, or didn’t they? That’s the Kristen-and-David-related question of the hour at the top of Evil’s Season 3 premiere. And we don’t have to wait long to find out that the answer is… kinda both?

The Paramount+ drama handles David and Kristen’s kiss and its aftermath in the cheekiest way possible, and we’re here for it. Read on for the highlights of “The Demon of Death.”

‘JUST THIS ONCE’ | The episode picks up exactly where the finale left off: David absolves Kristen of sin, then they kiss. And they keep kissing as they stand up and she starts peeling off his robes. They take the action to the bed, where Kristen pulls her shirt off, and David is momentarily taken aback by the cross-shaped burn scars on her abdomen. His hesitance seems to bring her back to her senses, and she starts apologizing. David then says the whole thing is his fault. And she doesn’t even put her shirt back on before she gathers up her things and leaves the room.

David throws something in anger, then falls to his knees by the side of his bed and prays for help. Just then, Kristen comes back into the room, takes off her sweater and skirt and kneels behind him, telling him not to look at her. (“IS THIS REALLY HER?” I write in my notes, and that will prove important later.) “We’re doing this. We won’t talk about it. We won’t mention it ever and we won’t act on it again,” she says. He protests, but she reiterates that she wants him, “and I’m not leaving here until you f–k me.” Toto, we’re definitely not on CBS anymore. David’s resolve withers and dies as quickly as any houseplant left in my care, and then he turns and begins kissing her again. “Just this once,” he whispers. 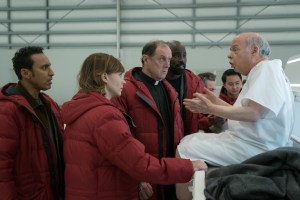 ‘WE’RE GOOD’ | At a building that looks like a massive airplane hangar, a scientific team is looking into the notion that the human soul weighs 21 grams, and that the difference in mass can be measured by weighing a body at the moment of death. The Catholic Church is apparently helping them, because the first research subject is a dying priest who’s in hospice care. As David & Co. are discussing this with the monsignor, Leland is in the office, owing to his new position of looking into liabilities for the diocese. But then Kristen marches right up into his personal space and hands him a restraining order that will force him to stay away from her family or else. (This later gets rescinded, because evil’s gotta evil.)

David pulls Kristen aside later and asks if everything “else” is OK. “Yeah, we’re good,” she says with a little smile.” “Good,” he says with an equally secretive smile, and Ben’s face after witnessing this cryptic little exchange is pretty great.

SECOND THOUGHTS | Wallace Shawn (The Princess Bride, Young Sheldon) plays the dying priest, whose name is Father Frank. He tells David that celibacy has been difficult for him, and he never really felt God’s love. “What if there’s just darkness, and I spent my life being an idiot?” he wonders. When the time comes and he’s actively dying, Frank is wheeled into the experiment; he’s placed in a container that kinda looks like a coffin with a window in it, and everyone scrambles out of the hangar to await the actual moment that Frank shuffles off this mortal coil. 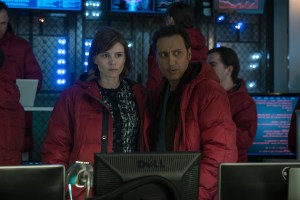 The monsignor is there with Kristen, David and Ben. When Frank flatlines, the monsignor starts to cry. Frank’s weight drops 24.63 grams at the moment of his death — “That’s the difference!” the lead researcher cries in glee. But then there’s some sort of power surge in the building, and suddenly, Frank is alive again! And he’s really happy! As soon as he’s freed from the coffin thing, he kisses his old friend the monsignor on the mouth, crying, “I always wanted to do that, and now I have!” Everyone’s confused he’s still 24 grams lighter, so what gives? Is he missing a soul? Ben’s got a better possible explanation: There’s a malfunction in the researchers’ system.

Later, Frank tells Kristen and David that the feeling of the monsignor’s hand on his back was the thing that brought him back from walking into the light. And it turns out that the cancer that was killing Frank is basically gone.

HE SAID/SHE SAID | And potentially soul-less priests who pop back from the dead are interesting and all, but David’s got other things on his mind. He pulls Kristen aside at the rectory and wants to talk about their evening together. “You stopped us. That’s the most important thing,” she says, and David’s instantly confused. “But I didn’t stop us. We kept going.” She looks at him like he’s a little nuts as she points out that she went home, and he starts to realize that something’s not right. He tells her he must’ve just been tired and confused, and then she says she doesn’t want them to be awkward together, and then they are both e awkward before she leaves.

And as for Father Not Quite Dead Yet? After a nun dies at the research site and gets 36 grams heavier as she passes away, David posits that there was a demon in Father Frank that passed into the nun — after all, Frank seemed much happier and less burdened after he came back. But by the end of the episode, there’s no concrete answer about what actually took place. Meanwhile, Frank leaves the parish, because both he and the monsignor — who by this point, it’s clear, are more than friends — are afraid of what might happen between them if he stays. The two men embrace the monsignor tightly before he takes off. 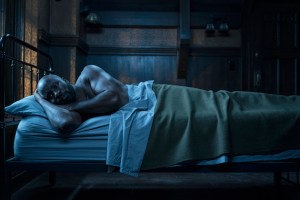 Speaking of avoiding temptation: That night, David prays “Save me” in bed. Then Kristen, clad only in her undies, saunters over to him. “This isn’t forbidden,” she purrs, “unless you want it to be forbidden, unless you want me to do things to you that are truly forbidden.” Ah, so we’re either in a demonic visitation thing or… David is just fantasizing — either way, what a sly way for the show to explore the chemistry between them without actually having David break his vows/Kristen cheat on Andy (cough again cough). NotKristen climbs on David, covers his mouth with her hand, and starts riding him. Behind her, the nun that died appears like one of David’s visions.

IN WHICH LELAND GETS PWNED | Elsewhere in the episode, Kristen takes her daughters aside and makes it clear that they are, under no circumstances, allowed to interact with Leland. “I want you do understand: This man intends to hurt us,” she says very seriously. And the grave nature of her warning really resonates with the girls, who HAHAHAHAHA JK THEY DO WHAT THEY WANT ANYWAY. One day after school, Lexis is tooling around on her tablet when she clicks on an ad for Bumblebee Valley, an Animal Crossing-type online game.

She plays as a character named Linda the Lizard, and immediately runs into a bespectacled pig named Pollie567. And when Laura finds her playing it another day, she wonders who the pig is. “Leland. He’s trying to trick me into thinking he’s a little girl,” Lexis says. (Heh.) Laura starts playing, too. And eventually, all of the Bouchard girls are online and barraging Leland, driving him crazy. (I kind of love that he’s getting the full brunt of the Bouchard maelstrom, in virtual form.) 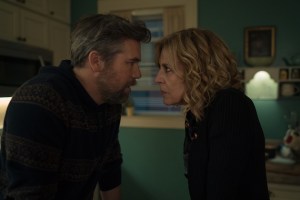 HEADS UP! |It’s a little rude of me to leave Andy’s return until the end of our recap, but c’mon. Even Andy is probably aware he’s the C-plot here. When he returns and can’t get in, because Kristen changed the locks and the girls are watching a loud horror movie upstairs and can’t hear him knock, he tries Sheryl’s room out back. She’s lying on the bed, listening to Gordon Lightfoot’s “If You Could Read My Mind” in the dark… and there’s some kind of demonic-looking being hanging out near the foot of her bed. Andy sees it and recoils, but when he peeks once more, it’s gone.

He eventually gets in the house and then confronts Sheryl: He says he’s home permanently, and he wants her out. She calls him “ungrateful” and a few other choice words, then hits him with a truth bomb: “Your time to be a husband was a year ago.” Then she gets in real close and whispers that he doesn’t want to get on her bad side, but Andy doesn’t seem worried. Later, when he tells Kristen that he’s got a buyer interested in taking over their climbing business, she happily starts talking about how they’ll use the money to build an addition onto the house. And when he says Sheryl needs to go, Kristen agrees.

At one point in the episode, Sheryl prays to her Eddie dolls — using very colorful language. And then later, when Andy is moving his and Kristen’s bed in order to achieve better feng shui, he finds Sheryl’s glass jar of grossness under the bed. He opens it and it smells horrifying; inside, there’s a shrunken head. Gagging and very freaked out, Andy dumps the contents of the jar into the toilet… where the head flips over of its own accord. (Side note: The number of things that would’ve sent me screaming from this house in the past two seasons is HIGH, and this is just the latest addition.) The evil lil’ cranium won’t flush, so Andy grabs a plunger and forces it down in a beautiful example of how this show melds humor and horror so well.

Now it’s your turn. What did you think of the premiere? Grade the episode via the poll below, then hit the comments with your thoughts.