The rumor mill is heating up on Bob Hearts Abishola.

During Monday’s Season 3 finale, Chukwuemeka’s mother Ogechi discovers that the church’s new pastor (played by Last Man Standing‘s Jonathan Adams) has eyes for a married member of his flock — and it’s only a matter of time before she discovers it’s Ebunoluwa. 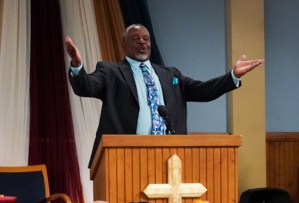 It’s easy to see what Abishola’s mother sees in the progressive-minded Falade. Case in point: He embraces the recently outed Morenike when Ogechi tries to shame her for being a lesbian. But the fact remains that Ebun is married to Abishola’s father. Whether or not she’s trapped in a loveless union probably won’t matter to the more conservative-minded congregation.

Abishola catches wind of Mom’s love connection during the pastor’s latest sermon and looks awfully concerned. Just how long will it be before Ogechi finds out and sends the church into a tailspin? And when that happens — because it’s not a matter of if the congregation finds out, it’s a matter of when the congregation finds out — will the Wheelers and the Olatunjis be forced to find a new house of worship? Or will Falade be driven out of town? 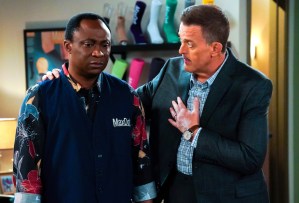 The finale also sets up a potential Season 4 rivalry between MaxDot and Toesey Woesies. When Goodwin learns that he was not selected for a bonus, he arranges for a job interview with Christina’s more successful footwear startup. Assuming he gets the job, it’s sure to create hostility between Goodwin and his cousin Kofo, and drive an even bigger wedge between Christina, her brothers Bob and Douglas, and their overly critical mother Dottie.

Prior to the Bob Hearts Abishola finale, fellow CBS sitcom The Neighborhood welcomed Abishola co-creator/star Gina Yashere, who guest-starred not as Kemi, but as party planner Chika. The latest crossover comes two months after Cedric the Entertainer and Tichina Arnold popped up on Bob Hearts Abishola as Neighborhood marrieds (and MaxDot customers) Calvin and Tina.

What did you think of Bob Hearts Abishola‘s Season 3 finale? Drop a comment with your full review — and your hopes for Season 4!