Just when we think Evil can’t get any more deliciously bizarre than it already has, it puts a demon on an elliptical trainer.

And that health-conscious, cloven-hoofed beast is just one of the many hellish creatures we get a glimpse of in the full Season 3 trailer, which Paramount+ released Thursday. There’s a demon hanging out in a couple’s bedroom, there’s a demon that seems to catch Andy unawares, and then there’s the crowning fiend: George, aka Kristen’s night terror, who mocks her near the end of the two-minute preview.

“But what about David and Kristen and the KISSING?” you ask? Don’t worry, that’s addressed right at the top of the trailer, when a seemingly scantily-clad Kristen whispers “We’re doing this” and a shirtless David answers, “We can’t.” Is it real? A dream? Some sort of succubus situation? Who knows?

The rest of the promo is a deluge of images from the supernatural drama’s upcoming season, which premieres on Sunday, June 12. Subsequent episodes will roll out weekly on the streaming service. Among our favorites: Ben gets creeped out by a seemingly possessed Jack-in-the-Box that knows his name; the Bouchards’ upstairs toilet could really use a plumber (or maybe an exorcism); Vatican secret agent Victor LeConte (played by Brian dD’arcy James) makes a reappearance; and Sister Andrea (new series regular Andrea Martin) boops Dr. Boggs on the nose, just like that demon did last season.

In addition, Paramount+ has released the season’s official posters, which you can see in detail by clicking on the images below. 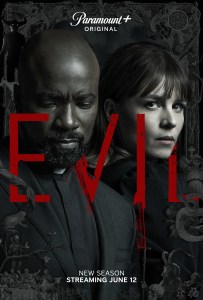 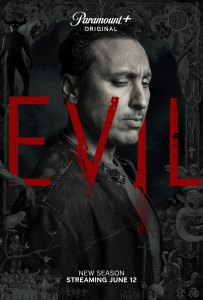 Press PLAY on the video above to watch the trailer in full, then hit the comments with your hopes and predictions for the season ahead!