The following contains spoilers from the May 4 episode of The Flash.

The 13th episode of the season was not a lucky one for a long-running character on The CW’s The Flash.

The good news coming out of the episode “Death Falls” is that Deathstorm’s reign of murderous, grief-guzzling terror has ended. The sad news is that in the course of leveling up to become “Hellfrost” and then sapping Deathstorm of his deadly powers, Caitlin’s doppelganger couldn’t take the heat, and perished back at the S.T.A.R. Labs med bay. 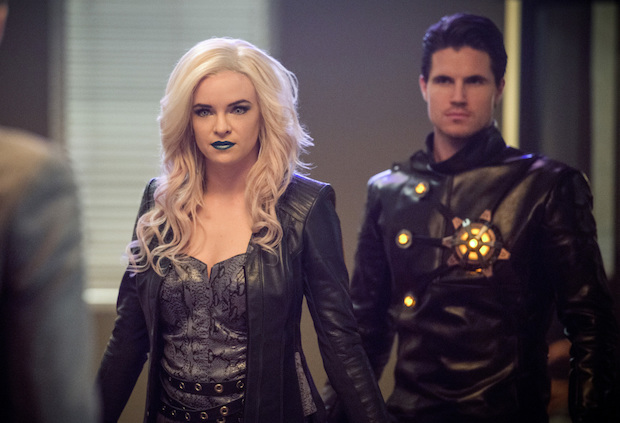 Panabaker and Amell during Season 2, on Earth-2

The death was, in many ways, a bit poetic, seeing as original cast member Danielle Panabaker first slipped into the Killer Frost persona for a Season 2 episode that also saw costar Robbie Amell debut a Deathstorm look, over on Earth-2. Now, Amell’s villainous Season 8 encore paved the way for Frost to get permanently iced.

Panabaker tells TVLine that when showrunner Eric Wallace pitched this arc to her during last summer’s hiatus, “My only question was, ‘Are we really going to kill her?’ Because it didn’t feel right to do a fake-out. This needed to be her real death, in order to feel truthful and honest.”

The next step was bringing back a key series alumni, to facilitate the sad sendoff. “It was always the plan to hopefully have Robbie [Amell] come back as Deathstorm, and I’m so glad that worked out with his schedule,” says Panabaker. “He and I have always worked really good together.” 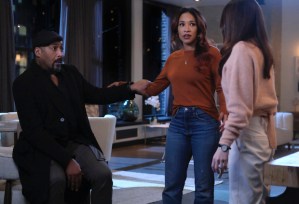 Though she hadn’t seen it by the time we spoke, Panabaker was “really proud” of Frost’s final episode, in part because the hour also involved multiple Team Flash members being visited/tormented by “Grief Ghosts” such as Eddie Thawne, Nora Allen, Chester’s dad and Allegra’s cousin.

“It’s a massive episode,” Panabaker notes. “In hindsight, there were a lot of different stories that they’ve been telling in this second Graphic Novel of Season 8 that have a different weight to them when you realize that it’s also the end of Frost’s journey.”

Frost’s send-off itself meanwhile served up a variety of fraught moments, including when Deathstorm tormented his would-be bride’s “sister” about being nothing but a soulless “copy,” or when Mark aka Chillblaine feared the worst, having made so many plans for his and Frost’s future. “The writing was really stellar,” Panabaker says. “It’s nice to be given the opportunity to play all of those different emotions.”

On top of all that, she who was once known as Killer Frost — introduced as an alternate, villainous, meta-enhanced personality of Caitlin’s during the Savitar arc, but ultimately split off into a character of her own — went out a hero.

“One of my favorite things about playing Frost the last couple of years is how much of a transformation she made, in terms of really coming into her own and taking accountability for her actions,” Panabaker reflects. “It’s been a great ride, for sure.” 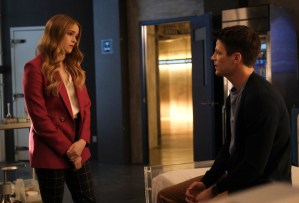 Coming off this latest casualty (which as Panabaker notes is pretty much an annual thing for Barry & Co.!), how will Team Flash react?

“I think that every team member is going to have a different journey,” Panabaker previews. “For Barry, who’s been around the longest, it’s going to be a challenge for him to learn to move on. But most significantly for Caitlin.

“She’s lost so much in her life already, and only recently come to a fairly symbiotic place with Frost,” the actress continues. “They’ve certainly had their ups and downs over the years, so it’s going to hit Caitlin the hardest. And she’s going to grieve in a variety of different ways, which is realistic and authentic.” Meaning, the team’s very sensible scientist might, say, act out? “Absolutely,” Panabaker hints. “There’s denial, anger, resentment…. She’ll probably go through it all before the end of this season.”

And what is next for Panabaker herself? The Flash was renewed for Season 9 after Grant Gustin inked a new deal to continue on as the titular speedster. But since then, Jesse L. Martin announced that he is stepping down as a series regular (to headline an NBC pilot), and no other original cast members have been announced as signed for next season.

“I hope to be back…,” Panabaker, who directed this season’s 17th episode (of 20), shared with TVLine. “I will say that I was very surprised to see that there was another season [ordered]. I think that emotionally, I, at least, was planning for Season 8 to be our last. But I’m grateful to the show and to the fans, and hopefully there’s more story to be told.”