It wasn’t long ago that Mary had a sacrilegious fantasy about youth pastor Rob. And during Thursday’s Young Sheldon, the boy genius’ mother turned to the mustachioed holy man for solace — not once, but twice.

George Sr. had advised his wife not to fear what her congregation might think of Georgie having a child out of wedlock. But with tension between the marrieds at an all-time high — as you’ll recall, last week’s family dinner culminated in a frank discussion about the Coopers’ turbulent union — Mary wasn’t exactly receptive. She later confided in Rob, who doled out the exact same advice her husband had. Only his advice came with a filtered cigarette.

Later, when George discovered that his wife had consulted Rob, he wasn’t the least bit surprised. “Of course,” he scoffed, before pointing out that Mary talks to Rob an awful lot these days. And once he realized that Rob’s advice was the same as his own, Sr. got snippy. “Next time I’ll stick God in there so you pay attention,” he said, laying it on real thick for someone who has had something of an emotional affair of his own.

Not long after that did Mary’s worst nightmare come true. Word had spread about Mandy’s pregnancy ahead of her weekly Bible study. No one showed, and the first thing she thought to do was call Rob.

“Do you have time to talk?” she asked.

“For you? Always,” he answered. 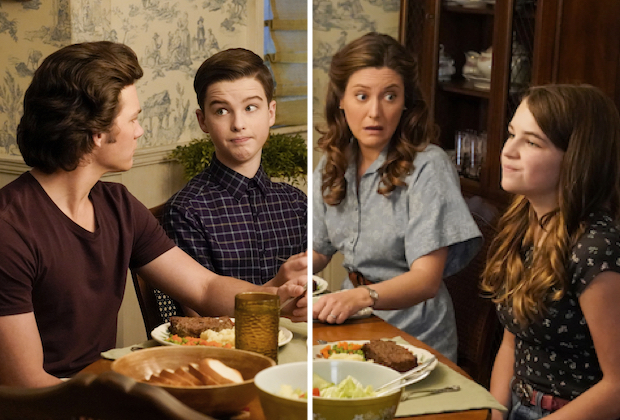 By the close of Thursday’s episode, the entire Cooper clan was in the loop about Georgie and Mandy’s predicament. George had gone and blabbed to Wayne, Mary to Rob, and Sheldon and Missy to Professor Linkletter and a classmate, respectively. Georgie was rightfully incensed when he discovered that everyone had opened their traps — he was having a hard enough time getting Mandy to return his calls, and she had not yet told her parents that she was pregnant — and Missy took it upon herself to apologize. She also assured her brother that he’ll make a great dad.

What did you think of Young Sheldon Season 5, Episode 20: “Uncle Sheldon and a Hormonal Firecracker”? Sound off in Comments.