Young Sheldon co-creator Steve Molaro told us that George and Mary would experience déjà vu when 17-year-old Georgie informed them that he was going to be a father. And during Thursday’s episode, titled “A God-Fearin’ Baptist and a Hot Trophy Husband,” an ongoing discussion about their own experience getting pregnant and marrying young led to a heated exchange at an already tense family dinner.

Mary was adamant throughout the episode: Georgie was to do right in the eyes of the Lord and marry Mandy. But George disagreed. “You ever stop to think she doesn’t want to marry a 17 year old?” he asked his wife. Mary, however, was more concerned with her own reputation than Mandy’s wants. How was she to step foot in church if her son had a child out of wedlock?

Georgie’s ‘rents tabled their conversation until Mandy came over for supper. George attempted small talk to make Mandy feel welcome, but Mary had no chill. No sooner had Mrs. Cooper said grace did she inquire about Mandy’s faith, and whether she intended to bring up her future grandbaby with religion. Both she and Georgie advocated for a wedding — Mary played it as a way for Mandy to deliver her parents some good news before she tells them that she’s with child, while Georgie, ever the salesman, tried to sell himself to Mandy as a future trophy husband — but Mandy was unrelenting. She’s already having a baby, she argued, and she doesn’t need another one. 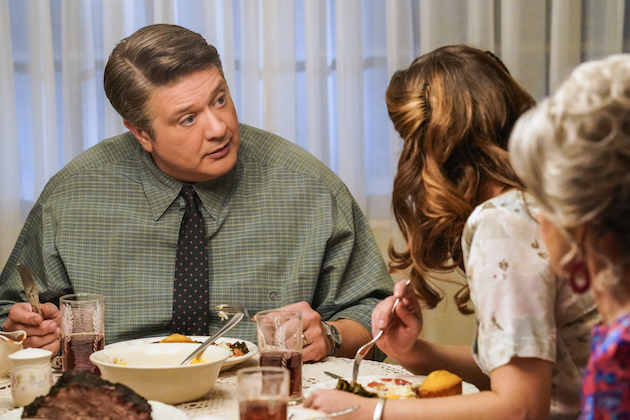 George, who was in agreement with his prospective daughter-in-law, declared that Mandy and Georgie had “already made one giant mistake,” and they didn’t need to make another one. This, in turn, inflamed Mary, who took George’s position to mean that he, too, made a mistake when he agreed to marry her 18 years ago.

“You really want to do this now?” George asked. “You’re honestly happy with how your life turned out? You have no regrets?”

“That giant mistake gave us our children, who I love very much,” Mary declared. “What do you want me to say?”

“I want you to admit that this marriage hasn’t exactly been a bed of roses,” George answered.

Throughout it all, Connie was a calm voice of reason. Earlier in the episode, after Mary clued her in on Georgie and Mandy’s predicament, Connie paid a visit to Mandy and assured her that no one was passing judgment. Later on, she told the expectant mother that she could call her if she needed anything. 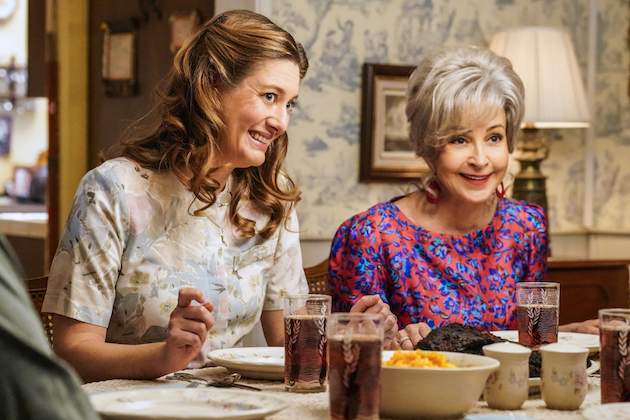 As for Sheldon and Missy, they were kept in the dark. This initially led the 12-year-old twins to believe that Dad’s ticker was on the fritz. And during dinner with Brenda and Billy, Missy suggested that perhaps their parents were divorcing, and George was seeing another woman. Brenda quickly interjected and said that “nobody met nobody” (heh!), at which point Billy told his dinner guests that estranged father Herschel had found himself a new lady friend named Martha Jean. (That was almost certainly an Easter egg for fans of Melissa Peterman’s turn as Barbara Jean on Reba… right?) The following day, Missy overheard her parents mention a baby and reported directly to Sheldon. As the episode drew to a close, brother and sister were under the impression that Mary, not Mandy, was pregnant.

What did you think of Young Sheldon Season 5, Episode 19? Drop a comment with your full review, along with any other thoughts you may have regarding the George & Mary and Georgie & Mandy drama).