Rocksroy Bailey wasn’t the only casualty of the Survivor monster this week. (Seriously, what is that thing, anyway?)

After Rocks moved from a player’s stool to the jury bench, his vote-out served as a catalyst for the night’s second and wilder Tribal Council. After Maryanne and Drea had eye-opening reactions to seeing two Black jury members sitting side-by-side, the former told the group that she morally couldn’t write down the latter’s name. Following a serious conversation about how their race affects how they have to play the game, Drea decided to tell everyone up front that she was 100 percent using her idol, which then prompted Maryanne to do the same. With Jonathan also immune, only two players were left vulnerable, and Tori Meehan was sent to jury after her Shot in the Dark was deemed a misfire. (Read a full recap of Episode 9 here.)

Here, Meehan talks to TVLine about the difficulties of playing from the bottom, her tricky relationships with Rocksroy and Drea, and why she’s made peace with falling victim to such an unconventional vote.

TVLINE | So what was the deal with you and Rocksroy? Why couldn’t you two ever get on the same page?
TORI MEEHAN | So I know that people want the drama like, “Yeah, we just hate each other!” but in real life, we actually get along amazingly. He’s an amazing human being. But in the game, what I wasn’t able to understand was that when Rocks was talking to me, he was communicating with me like he does with his children because that’s what he’s used to. There’s nothing wrong with that, but I interpreted it as he was talking down to me. Also, I hadn’t seen a player like Rocks before. I was coming to him like, “Hey, here are some secrets. Let’s work together,” and he’s like, “Nope, I’m not giving you any information.” So it was really hard for me to work with and understand in the game.

I will say there was a strategy behind our bickering, especially post-merge. I wanted people to see Ika as super fractured, and even though I didn’t enjoy Ika as much, I knew it was good for my game to work together. So I wanted them to see me and Rocks as, “Oh, they don’t get along at all.” That way people would tell Rocks stuff they didn’t want me to know, but Rocks would tell me, and he would feed me information! He was one of the only people giving me information. So it wasn’t just an emotional issue there, it was a bit of strategy.

TVLINE | Even since Ika, you played from the bottom a lot, and it seemed like you could never really correct that.
Yes, it felt that way from the beginning. It all started with the taro rumor — and I did find my tribe taro! But yeah, I was on the bottom and I think that’s why I came off as so assertive and competitive and sassy because from the first Tribal it was like, “OK, I might go home, so now it’s do or die. I’m gonna fight for my life. This is a dream I’ve been trying to accomplish for six years. I’m not just going to go down. I won’t accept that.” So it really put me in a position from the very beginning and every Tribal after that.

TVLINE | Did participating in Sequester 3 prep you, in any way, for the social game of Survivor?
I thought it did! But what’s funny is if you watch Sequester and you watch me in Survivor, I’m pretty much the same person. That’s why I had this strategy. I wanted to be Tori the therapist on the island, because believe it or not, I am a great therapist. I’m good at what I do. But who I am in the therapy room is very different from the loud, outgoing person I am outside of that. So in therapy, I’m very calm and collected. I’m more professional. I don’t have crazy facial expressions. So I was hoping to bring that into the game of Survivor, but it didn’t end up happening because I was on the bottom from the get-go. I was like, “OK, that act is gone. I’m going to play hard!” 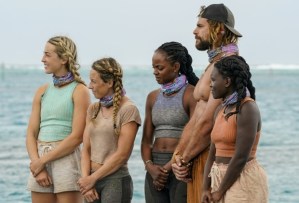 TVLINE | Before we started, you mentioned that viewers didn’t get to see your game. What’s something people should know?
Something that did get shown was me talking to Jonathan post-merge being like, “I want you gone because you’re in my way of winning individual immunities.” Like… dumb! But what that conversation was… I saw Hai as a threat very early on and in that very first fake-merge vote when Lydia was going home, I was under the impression it was Maryanne or Jonathan, and I wanted both of them to stay. So I went to Jonathan and I said, “Hey, they’re trying to get you out. I want to work with you. Let’s get Hai out.” So I sent Jonathan on this mission to kind of save himself, so I could sit back [because] I had the necklace. I told him if something changes at Tribal, tell me which way to go because I wanted to work with him. Even watching Hai now, clearly he’s a threat and I wanted to get him out early. Those are the kinds of moves I wanted to make, but I literally had no one to make them with me. So they’re all just ideas in my head that I take away as souvenirs. But they were there!

TVLINE | Drea seemed wary of you, and even claimed you’ve been coming for her since Ika. Was that really the case though?
No! Any time me talking about blindsiding Drea was shown, I was relaying Swati’s plans. I never wanted to go against Drea. My ideal situation was me, Drea and Swati going to the end. I saw that as three strong females, all of different races and religions. How cool is that, that strong females could work together instead of trying to dim each other’s light or take each other out? I wanted to work with her, but she had no desire to work with me. It was not because I was trying to get her out. I was not. That was a delusion! That really frustrated me out there because that led her to spread a lot of lies about me post-merge to where people didn’t trust me. She thought I was going for her since Day 1, which was never the case.

TVLINE | Let’s say your group lost the immunity challenge, and you guys voted first at Tribal Council, thus, preventing Drea and Maryanne from seeing Rocksroy in the jury. How do you think things would’ve shaken out then?
I’ve definitely thought of that. If Jonathan wasn’t so good at challenges, I would probably still be in the game. Drea was going home that night. Of course, I only know what I was told and what I gathered, but I fully believe I would’ve still been in the game if we hadn’t seen Rocks. 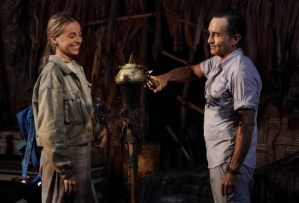 TVLINE | After Maryanne and Drea spoke on their feelings of playing Survivor as Black women, Tribal took a turn. Did that make you feel like you couldn’t fight for your game the way you wanted to? Did you hold back at all?
I knew I could have. There were things going through my mind, like when I went to go play my Shot in the Dark, I was like, “What if I just write Lindsay’s name on a piece of parchment and that’s the only vote, she’s going home!” I mean, I’m kind of kidding there. My mind was absolutely still working. I knew I could fight, but I made the decision not to, because I felt in that moment, if I were to go home that night, all that meant was my Survivor dream was coming to an end — which sucks and is so hard for me. But I was able to understand in that moment that if Drea or Maryanne were to have gone home that night, it would’ve been a lot more hurtful and a lot deeper for them. And so, I was able to say, “You know what, the time has come. This conversation needs to be had,” and I’ve had peace about that ever since. I’ve never had bitterness towards that Tribal. I felt like it was the right thing to do to let them have space to process and talk about that, even if it meant my game was sunk.

TVLINE | If your Shot in the Dark had kept you safe, was there any talk about Lindsay then getting to take hers? It almost wouldn’t have seemed fair if you were allowed to take it, but not her. Did that ever come up?
I will say, it wasn’t said that I could go play my Shot in the Dark, and I didn’t ask to go play my Shot in the Dark. I said, “I’m going to go play my Shot in the Dark” because it wasn’t clear that I was going to be able to. But I wasn’t going to ask so they could tell me no. I also think the Shot in the dark was so new, we didn’t necessarily know what to think of it, so I don’t think Lindsay was thinking of that? But I don’t know. I don’t know what was going through her mind. I did see watching back that she was very moved by the situation that was happening, and also probably afraid. If I was safe, then she was going home. We weren’t too aware of that, but I just knew I was for sure playing my Shot in the Dark no matter what because that’s all I can go off of. And that felt safe in the sense of… it didn’t feel like I was scheming or trying to take away from the moment that happened. I was just going to calmly play it and pray to God.

TVLINE | Any last words regarding your Survivor experience?
I dreamed of this for six years. I overthought everything and it didn’t go at all how I wanted, but I want people to know: Dream the dream, pray the prayer, go for it. Even if it’s totally messed up, I still got to play Survivor and I did some things that I’m proud of. I somehow cockroached my way out of multiple Tribal Council. I got to win two individual immunity challenges. Like, what?! Also, I did find taro. That did happen!

TVLINE | Well, you may not have won the game, but I think you win the prize for the most epic eyeroll in the show’s history.
I had no idea my face did that so much!