A double elimination on Survivor brought double the chaos when the merged tribe was split into two teams for the weekly immunity challenge. With two players granted safety, both teams went to separate Tribal Councils, leading to one blindside, a Shot in the Dark play, two flushed idols and one riveting and emotional conversation about how race and religion can affect gameplay. (Click here for a full Episode 9 recap.)

In our first exit interview of the week, the eliminated Rocksroy Bailey talks to TVLine about Maryanne and Drea’s “inspiring” words, his strange relationship with Tori and why he decided to pitch the idea of a guys’ alliance so late in the game.

TVLINE | Let’s start at Exile Island. You were the lucky recipient of the controversial hourglass advantage. What was the general reaction to the twist back at camp?
ROCKSROY BAILEY | My Ika guys, Drea and Romeo, had no clue what power I had, but their reaction to the decision I made… I was like, “Wow, OK, let’s go!” It solidified our alliance. As you saw in the first episode, me, Drea and Romeo had an alliance, and we said we were going to stick together. Everyone that I saved from doing the immunity challenge came up to me at camp and was like, “Thank you, thank you!” The others that had to do the challenge, I told them, “You got to eat. You got a little bit of reprieve from the game, of feeling comfortable for a while,” and they didn’t say what I did was a bad thing. They were like, “We understand Rocks.”

TVLINE | Let’s be real: Was the hourglass as difficult a decision as it appeared on TV? It seems to me if you’re offered safety, you just say yes? It’s a no brainer!
The decision was hard because I did really think a lot on it. I said to myself, “Yes, I have two people that I know I’m confident with going forward,” but if I decided to just leave it — because I’m a competitor, I love competing — it would also show that I am playing a game of “let the best person win.” Like, “you won, no do-over. Let’s just go forward.” I did think a lot about it, and I made the decision to smash it not on the fact of self-preservation, per se. I don’t think they showed it in the clip, but I said, “I don’t believe everyone gets a trophy, but I do believe in redemption.” Sometimes in life, you do get a do-over, but I really did think on it a lot. 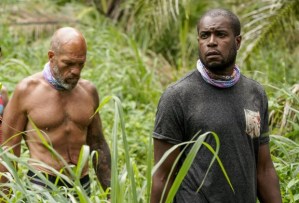 TVLINE | When you were at Exile, you quipped that you were free from your wife’s nagging… on national television! Any blow back from that on the home front?
Yes, yes, yes and YES. [Laughs] That’s all I’ve got to say!

TVLINE | So this whole guys’ alliance you tried to start — Hai and Omar weren’t really having it. Why were you so confident they’d want to join you?
When I got back, I was two-and-a-half days in the lurch, not knowing what was being said or what was happening. I said in one of the episodes prior that my social game had to step up. I had to do something. Self-recognition! Jonathan and I went looking for crabs and fishing, and I started speaking to him about competition and his life and everything. Then Mike, his whole life was helping, protecting, running into buildings that may be in flames. He also had that drive. I said, “Why not have something? We could have a bond here,” not knowing that other alliances were already formed and very solidified in that sense.

So I was just trying to make a move. I was trying to put something out there that I felt maybe they would come to like, “Yeah, maybe we should. Why not?” But one of the things they didn’t show was that I wanted Drea to be a part of it. Hai and Omar, I didn’t know what was happening with them in their alliance and their tribe, so I was just trying to make a move for myself to see if I could preserve myself further in the game by putting that little thought in the guys’ heads. “Don’t vote for Rocks. Rocks has got your back, no problem. He’s good until whenever. Don’t even think about him going forward.”

TVLINE | What was the deal with you and Tori? Why did you two butt heads so much?
Tori’s a wonderful person. I’ll start by saying that. Tori and I were like oil and water. I’m a city boy, she’s an Oklahoma country girl. Nothing wrong with that. I just think that we just never understood where our gameplay was. But at the same time, I think she was a great asset for Ika. She worked hard during the challenges to help us. She was incredible by winning two individual immunities right off the bat. But even in Ika, Tori was a person who always tried to figure out where you were coming from, whereas with me, I was like, “Let’s get stuff done.” I wasn’t even trying to play a social game yet. I didn’t want to play that, but Tori wanted to play that social game.

I think that disconnect with us was really shown during some of the episodes, yet still, I think we both came together and both understood that Ika was better with us staying physically strong. We had “Goliath” (Tori’s word for Jonathan) on one end, and it was like, “Wait a second, we have to go through this against this guy who is literally pulling people out of the water?” But like I said, Tori is an incredible human being. I just think with our pasts and where we came from, we couldn’t relate to each other off the bat. 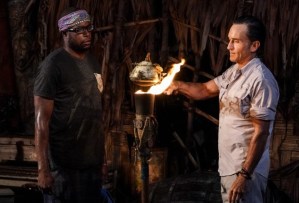 TVLINE | The second Tribal Council of the night was extremely emotional. How did you feel about everything that Maryanne and Drea said about their experiences as Black women playing Survivor?
So I want to go back to that moment. They say it’s a blindside, but in Survivor, your torch could be snuffed at any moment. That’s why I said, “Thank you, Jeff.” It was pouring rain. It rained that whole time. Drea’s the first person who walks in, she looks over, she sees me, she sees Chanelle. She was like, “What the… Rocks? No.” I think she was feeding a lot on her personal past and background. She saw two brown people sitting there and she did not want to be the third, and there was nothing wrong with that. And Maryanne, to her credit, said, “Hey, I don’t want to be the third either.” For them to actually say to everyone, “I have an idol and I’m playing it,” that was personal, based on their past experiences. That was them just saying, “Hey, hear it. I’m good. Tonight, it’s not going to be me.” It was so deep and so inspiring to see. Even now speaking about it, I will relive that day not with me being voted out, but their reaction to seeing two other brown people sitting there and not wanting to be the third… it says a lot. I’m just gonna let that moment be what it is.

TVLINE | Jonathan kept saying some pretty cringey things during that Tribal, and I kept wanting him to just stop talking. What was your take on his input?
Yeah, when I heard what Jonathan was saying, I was kind of like, “Jonathan, just shut up!” [Laughs] I was thinking that, but you can’t say anything as part of the jury anyway. Like you said, Jonathan… you cannot relate, so just shut up. You know, God gave you two ears and [only] one mouth…

TVLINE | Any last words about your time out there?
Dad was a dad out there, I guess! I have no regrets about anything I did or said, but I’ll tell you this much: It was wonderful being able to take care of and help my tribe advance as far as we got. It was.