Wednesday’s Survivor action was a lot to take in, as not one, but two castaways left the game in yet another highly unprecedented and emotionally charged Tribal Council.

Similar to Liana’s impassioned speech from last season, race once again became a hot topic after the merged tribe was split in two for separate votes. After another Black player joined Chanelle on the jury bench, two others had visceral reactions to how things were shaking out. What occurred next was a lengthy conversation on the “burdens and privileges” people bring to the game, and how those can often create extra hurdles for people of color in the game. Let’s dive right in and start unpacking it all.

After Tribal, Hai is upset that someone tossed a hinky vote his way. The culprit was Romeo, but he has zero intention of admitting that, despite Hai’s accusation. “I knew that it would make him squirm,” says Romeo. “I wanted him to freak out and I was successful.” He also goes on to say that whoever is aligned with Hai is “dumb,” but they can’t be too dumb if they’ve aligned themselves with the numbers, right?

Despite Hai’s bloodlust for Romeo, Rocksroy and Jonathan have other ideas. Rocks pitches a guys alliance with Mike and Jonathan, but they have to convince Hai and Omar to get in on the action, too. As the biggest men of the season, Mike and Jonathan don’t want to get picked off just because they’re the most obvious targets. Omar, though, knows he won’t be able to defeat Mike and Johnny at the Final 5 (smart man), but the real problem: Rocksroy hasn’t even spoken to Omar before this! Hai isn’t too keen on the idea either. “I’m not a part of the misogyny club here!” he says. “The way Rocksroy talks to people makes me upset. He’s very blunt, he cuts people off… you only talk strategy with Rocksroy when Rocksroy wants to talk strategy, and I hate it.” Zero lies detected. The guy’s social game needs work. 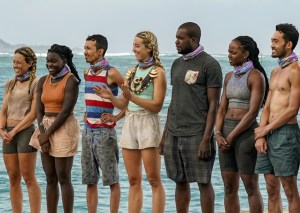 IMMUNITY IS BACK UP FOR GRABS | The challenge is a classic we’ve seen before. Players will be separated into two teams, and must balance on a triangular perch bobbing in the water. If they touch the platform or fall in, they’re out. Two people will win immunity, both teams will vote in separate tribal councils, and the team that lasts the longest will win beef and veggie kabobs. The winners will also vote last, so they’ll know who was first out.

The breakdowns are as follows. For Blue, it’s Drea, Jonathan, Tori, Lindsay and Maryanne. For Orange, it’s Mike, Rocksroy, Omar, Romeo and Hai. At the jump, the sea and winds are not cooperating. Almost immediately — we’re talking seconds — the swells take out a good 80 percent of the players. Hai wins immunity for Orange, while Lindsay and Jonathan duke it out for Blue. Jonathan wins the immunity, and shortly after, Hai eats it, giving Jonathan’s squad the big feast.

CAMP | The two groups are separated after the challenge, and Romeo’s talking like it’s Game Over. While Mike and Rocks seem locked in, there’s no way Omar and Hai are going to roll over. Omar tells Romeo that they need to go for Rocksroy, but Romeo is having a hard time trusting Hai, who he calls “the sneakiest weasel.” Hai knows that cutting Rocksroy would be the best strategic move, but he doesn’t want to pull the trigger without Mike’s blessing. Mike isn’t having it, though. He thinks it’ll make him look less trustworthy to the other players.

At the other beach, the former Takus have the majority, which puts Tori and Drea in the bottom. Jonathan talks to Maryanne about flushing Drea and her 75 advantages out of the game, but he missteps when he tells Maryanne she’s the decoy vote. She doesn’t appreciate being talked to like a child, and tells us that Jonathan is really getting to her. She then goes and tells Tori about the plot to vote out Drea. (Why is it that I get worried when anyone tells Tori anything?)

Jonathan talks to Drea and says they want to flush Maryanne’s idol, which, as another idol holder, is a red flag for her. Thankfully, Lindsay is there to tell Jonathan what a COMPLETELY DUMB IDEA it is to use Maryanne as the decoy. If Drea plays the idol and Maryanne goes home, they lose a Taku member, plus Maryanne’s idol and extra vote. (Why didn’t Jonathan paint the decoy target on Tori, especially since Drea can’t stand the girl?) “You’re not listening to me,” Jonathan says, while not listening to Lindsay whatsoever. Lindsay is well aware of the beef between Tori and Drea, and they should use that to their advantage. This immunity win seems to have given the dude quite the power trip, if you ask me. 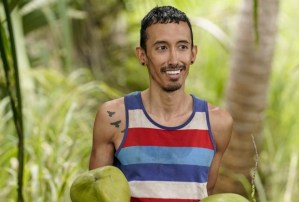 TRIBAL COUNCIL #1 | The five men are up first, and after talking about the elements for about seven seconds, Mike talks about how fast things change. Rocksroy says the day was “a little bit more mellow,” which shows exactly how far his head is buried in the sand. He thinks everything is locked and loaded, while Mike also confirms that “we didn’t scatter today.” These guys are in for a big surprise!

Jeff casually mentions that the Shot in the Dark could screw everything up, as if to say, “Hey guys! Use the Shot in the Dark! You could win safety!” (The producers seem so entirely desperate for that thing to work, but I think they should ditch it for 43.)

It’s time for Group 1 to vote, and when Jeff tallies ’em up, Rocksroy is (unsurprisingly) sent packing. (Read our exit interview with Rocksroy here.)

TRIBAL COUNCIL #2 | The second group is shocked to see Rocksroy sitting beside Chanelle in the jury. Drea says the last two votes have changed her mindset. She’s not happy that two of the four Black contestants were out back-to-back. Jeff asks if she thinks it’s race related. “I think it’s subconsciously a little bit of that,” she says. “I see now I have to play the game a little harder.” She then drops a bomb. “I can tell you right now, I’m playing my idol tonight so I can stay in this game. I’m not going to let that happen to another one of us.”

As Jeff talks, Jonathan asks Drea via whisper what she wants to do. She wants Tori out. Lindsay tells Tori that they’re splitting the votes and she should still write down Drea’s name. When Tori tries to communicate with Maryanne on the downlow, Maryanne starts responding quietly, but then makes her impassioned plea public. She says when she saw two Black people sitting together in jury, everything changed for her, as well. She says she literally cannot write Drea’s name down. “[If] I write Drea’s name, that’s three Black people in a row. And Survivor isn’t just about strategy, it’s not. Survivor is also about bringing the social world, big, into a small thing. If I write Drea’s name right now, that means that I’m a part of a perpetuating problem… I can’t do it. Morally, I cannot write her name down.”

Jonathan says they’re coming at this “as if we’re racist,” which for the record, no one ever, ever said. He (incorrectly) argues that it’s just a game, and then he (incorrectly) tells Drea she’s getting “aggressive” (no, no, NO, all of the NO!), when he is, in fact, getting defensive for zero reason. 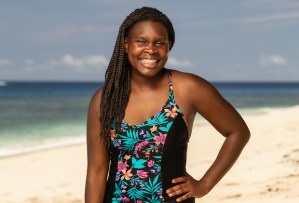 Maryanne tries to explain subconscious bias to him, which he then, again, takes for her implying that he’s subconsciously racist. “Just because I’m saying how I feel at this moment does not mean that you can make that your problem,” Drea says. “This is my situation, my issue. I’m addressing it the way I wanted to address it.” She then talks about how minorities often get kicked out first in this game, and unfortunately the cycle seems to be continuing. She’s brought to tears mid-sentence. “I came into this game knowing that I would have to think about how I speak and how I act.”

Drea and Maryanne know what the perception might be: That they made it about race, so they got to stay. And they aren’t having that.

“I need to play this [idol] so that people who are watching will know that I didn’t make it another day because of race,” Maryanne says. “Jeff, with 1,000 percent certainty, I can tell you that if both of us don’t play our idols tonight, there will be someone watching and saying, ‘They used race. Nothing is off limits in Survivor.’

“Coming to this game my biggest fear was that I would see some sort of injustice and I would sit down and do nothing. I’m not saying that it’s an injustice for Chanelle and Rocksroy to be voted out because I don’t know the full story, but if I let that pattern continue, that’s an injustice for me and my experience as a Black woman. Especially coming on Survivor where millions of people will be watching, it feels like I have to do it because who else will? It’s so frustrating how I have to then incorporate that into the way I play the game… some people don’t have to experience that burden when they enter the game. We all technically have a 1-in-18 shot for the million, but because we all come with our burdens and privileges, that 1-in-18 might be bigger or smaller for some people, and that sucks.”

The tribe realizes the moment is bigger than the game, and understandably, feels like it’s nearly impossible to go ahead with the formality of the vote. Jeff says they can talk about the vote out loud, and stay seated by the fire. That said, Drea and Maryanne hand over their idols to make it official: They aren’t going anywhere tonight. Jonathan is also immune, leaving Tori and Lindsay as the only two vulnerable.

Tori says she feels like everyone’s gunning for her. Drea says Tori’s been after her since Ika. Jonathan says Tori lied to him. Maryanne says it’s the best way forward for her. With that, Tori plays her Shot in the Dark. If she gets safety, Lindsay is automatically going home. (Would that be fair, though? Why wouldn’t Lindsay then get the chance to try her hand at the Shot in the Dark, when Tori is only using her Shot because of the knowledge available to her? It’s a highly unprecedented and unclear situation here.)

Well, my “what-if” questions are nullified faster than Janet Carbin’s idol because when Jeff reads Tori’s scroll, she is NOT SAFE and thus, becomes the 10th person to exit the game. (Read our exit interview with Tori here.)

What are your thoughts on tonight’s votes? Do you feel for Maryanne and Drea? Let us know by dropping some comments below.