Rival ranchers, an accidental murder, a sinkhole that defies space and time. The west sure is wild.

In the new supernatural Western Outer Range, Josh Brolin plays Royal Abbott, a rancher who discovers a metaphysical void on his land that quickly turns his entire existence upside down. In the series’ first two episodes (now available to stream on Prime Video), a suspicious hiker named Autumn surfaces, just as the family’s neighbors plot to steal some of their west pasture — the very same land that encompasses the hole. To make matters worse, son Perry’s bar fight accidentally becomes murderous, turning the entire Abbott clan into accomplices after they cover it up. (Read a recap of the premiere here.)

The series is ambitious both in its construction and storytelling, fusing sci-fi elements with classic Western themes to a create a pastiche that’s mind-bending, addictive and frankly, beautiful to look at. Add in some heavy familial drama and puzzling mysteries, and you’ve got a cocktail that hits hard right from the jump. Creator and executive producer Brian Watkins breaks it down in far simpler terms: “It’s a story about real people who are grappling with the unknown.”

Watkins, who grew up in the west, always knew Wyoming was the perfect locale for a twisty tale like Outer Range.

The Abbotts work their “traditional homespun ranch,” but as seen in the series’ first couple episodes, the neighboring Tillersons, led by Will Patton’s Wayne, are cut from an entirely different cloth. 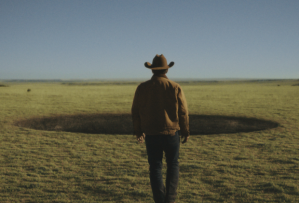 “The Abbotts’ lifestyle is one that’s based in generations of culture passed down,” Watkins says. “The Tillersons represent the opposite of that. They’re more capitalistic. They’re profit-driven and greedy. One of the best images of the show is the Abbotts on horseback on one side of the fence, and the Tillersons on ATVs on the other side. That tableau really gets at the heart of who these families are. They also represent their views on the land. One has much more of a respect and reverence for the land, while the Tillersons see it as something to be usurped or gained from.”

As a result of eeeeeverything that happens in just two episodes’ time — from the murder of Trevor Tillerson, to the families’ brewing turf war and Royal’s traumatic experience inside the hole (more on that in a bit) — Royal’s otherwise stalwart disposition begins to crack, leading to one particular tour-de-force for Brolin. The dinner monologue in question was one of the earliest scenes Watkins wrote for the series, which saw the character begging God for answers, while simultaneously questioning His existence in the same breath.

“This is a man who is angry at the cosmic weight of the world, who’s screaming for order in an order-less environment,” says Watkins. “I don’t think you can tell a story about the west without also talking about spirituality and faith. I think spiritual people are very often angry with God, and I think it’s an aspect of faith that isn’t talked enough about.”

The rancher’s fear of the unknown served as a sinkhole-sized sandbox for the actor to play around in.

“[That scene] is where Josh’s performance speaks volumes to how good he is at showing us this laconic, yet simmering man,” adds Watkins. “There’s always something happening beneath the surface. For it to erupt in something that asks questions of the holy and the sacred felt only right in that moment where a man was really grappling with all of these bizarre events that were happening to his family.” 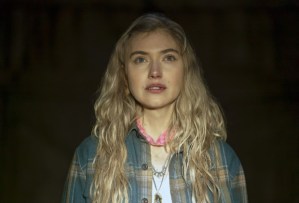 And then there’s Imogen Poots’ Autumn, who pushes Royal into the hole at the end of the premiere. Does she know more than she’s letting on? Maybe. But like Royal, she’s searching for answers about herself and the world around her. According to Watkins, she’s “one of the smartest, craftiest characters in the show.”

“The twists and turns that Autumn goes through [create] an exciting character arc. She’s a person on a mission,” he says. “Many people come to the west in search of their own identity, of something both inside themselves and something transcendent. Autumn exemplifies that person who is on a spiritual quest. She’s looking for something that she ends up finding in this hole in the earth.”

But Range‘s most mysterious elements are best left a secret, not that Watkins is eager to spill any further. Viewers will have to keep watching to find out why Autumn pushed Royal into the dark abyss and what her true intentions are.

“She represents this zealot spirit of the west that I’ve encountered personally, and that historically, we’ve seen so many people encounter as well,” he hints. “She’s sort of like Calamity Jane meets Janis Joplin meets someone that offers you a weed brownie at a concert. [Laughs] I’m excited for people to see where her character goes.”