In Prime Video’s new neo-Western Outer Range, a rancher’s family contends with gut-wrenching loss, financial troubles, hostile neighbors and alcoholism. But that’s not even the half of it.

Led by the sturdy Josh Brolin, the Abbott family struggles to move on following the disappearance of one of their own, until a mysterious sinkhole found by their patriarch Royal introduces them to a world of supernatural wonder and soon-to-be chaos. Add to that a covered-up murder plot and you’ve got a wild combo of Yellowstone meets Dark, with bits of Bloodline thrown in for good measure. Sound intriguing? Read on for a recap of “The Void.”

At the top, Royal (Brolin) briefs us on the Greek god Chronos, who used a sickle to cut a hole in the cosmos between heaven and Earth. He separated our world from the next. The known from the unknown. “The world has been waiting for something like this,” Royal says.

Three days earlier, his wife Cecilia (Lili Taylor) recounts a recurring dream she had about their children. Their daughter-in-law Rebecca came back, and their granddaughter, Amy, ran into her mother’s arms. Cecilia asks him not to tell their son Perry.

One night, Amy asks her grandma how she met grandpa. Something bad happened in his childhood, Cecilia says, and he ran away from home. He doesn’t remember the trauma, though, and Royal never even knew his real mother and father. One day, he walked right up to the very ranch they still live on and began working the land.

Meanwhile, a man named Wayne Tillerson (Will Patton) talks to a buffalo head mounted on the wall. “You feel it too, don’t you?” But the buffalo, being very dead and all, does not respond. (It’s not that kind of show… yet, at least.) He calls Cecilia to warn her that something is coming, but she asks if the rambling old fart is drunk. 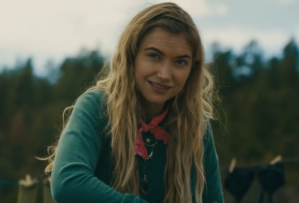 The next day, a hitchhiker named Autumn (Imogen Poots) arrives looking for a place to camp. Since the Abbotts could use the cash, Royal lets her stay.

Later, Wayne’s sons Trevor and Luke approach Royal with court-ordered documentation proving that the Abbotts’ fences are a mile on their property. If he doesn’t move his fences back, they’ll take him to court. Royal assures his sons he’ll handle it.

While out riding, Royal discovers a large sinkhole in the middle of his west pasture. He’s reasonably perplexed, as he drops a rock into the hole and hears nothing. A weird, wispy smog hovers over the hole which only adds to its mystery, and when he sticks his hand in it, he sees glimpses of his wife (in the soon-to-be future?) and two young boys. It’s not much, but it’s enough to rattle his cage.

When he gets back to the house, Deputy Sheriff Joy is there with some bad news: They’re going to officially halt the search for Rebecca. It’s been nine months since her disappearance, and the priority for her case has diminished. Perry insists Rebecca wouldn’t have willingly left Amy.

Royal returns to the sinkhole, and seems as fascinated as he is confused. He crumples the legal documents up and tosses them in. As he stands there, a buffalo with two arrows in its side moseys over, then walks away. He warns Autumn to stay away from the area with the hole of doom. She asks him what he would sell the ranch for… $5M? Six? Does the mysterious stranger have a loaded bank account… and perhaps an ulterior motive?

Cecilia tells Royal that she thinks Rebecca is gone. Like gone, gone. She says it’s something they just have to accept, but Royal isn’t so sure. In another conversation, Perry’s brother Rhett suggests that he move on, as well, only to backpedal and apologize. The chat brings Perry to tears. 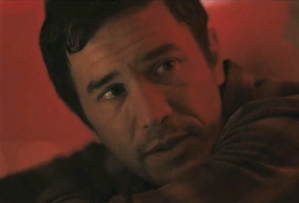 A drunken Perry then picks a fight with Trevor, and after the guy mentions Perry’s M.I.A. wife, Perry destroys his windpipe, and brutally bludgeons the guy with his fists. When Rhett pulls the truck up, the look on his face says it all.

The men start driving, and Rhett asks Perry if wants to go see the Sheriff. Trevor’s dead body is stashed in the bed of the truck. Rhett slams on the brakes as a pesky buffalo blocks the road. The same animal with the arrows in its side that Royal saw earlier.

The two men park the truck in the Abbotts’ barn. Royal’s angry they brought the dead body home, but after thinking on it, he says, “Let’s fix this.” He pulls Perry out of the house and says there’s no way he’s going to let Amy lose her father, too. He orders his son to clean out the truck, and leave the body to him. Good thing he’s got a brand new, probably-supernatural sinkhole on his land!

Outside the bar, Trevor’s brother finds his bloodied belt buckle — a damning bit of evidence that’s sure to bite the Abbotts in the ass later.

Shortly after, Trevor’s brothers come knocking. They ask all sorts of questions about when Perry got home and where Rhett is. Perry flips the barn light on and off repeatedly to warn Rhett and Royal that they’ve got company. The Tillersons find tire marks in the dirt, which leads them straight to the barn. They bust their way in and find the truck, only it’s filled with hay bales. Royal is already galloping away on his horse toward the hole, body in tow. A burst of lightning causes the horse to buck, and Trevor’s body crashes to the ground. Seeing truck lights approaching, Royal quickly drags Trevor through barbed wire. He finally makes it to the hole and doesn’t hesitate: He tosses that sucker straight in.

A flashlight flicks on. It’s Autumn. She asks him what the hole is, and why he just threw a body down there. She asks if he knows who Chronos is. The god tore a hole in the cosmos, and that’s why we have time, she says. She promises she won’t tell anyone; it’ll be their little secret. “The world’s been waiting for something like this,” she says. Then, she pushes Royal into the hole.

Meaty premiere, right? Grade the episode below, then tell us your thoughts and theories in the Comments!