Aasif Mandvi‘s got a story for ya. A bunch of them, actually.

All of the tales are funny. Some of them are true. And figuring out which yarns are the real deal is the objective of The CW’s new comedy show Would I Lie to You?, which premieres Saturday (8:30/7:30c) and which Mandvi executive-produces and hosts.

“You could play this game over the dinner table with your family,” Mandvi, who currently also stars on Paramount+’s Evil, tells TVLine. “It needs to have that feel of it’s just a bunch of people sitting around, telling wacky stories. And that’s the feel, I think that we achieved.”

For those unfamiliar with the original, British version of the show: Mandvi presides over two teams, one led by Veep alum Matt Walsh, the other by Canada’s Got Talent‘s Sabrina Jalees. Two famous-face guests join each team for an episode and tell stories that may or may not actually have happened, then the opposing team tries to guess what’s real and what’s baloney.

“It’s set within the framework of what you would call a ‘game show,’ but the points don’t matter. Nobody cares who wins,” Mandvi adds. “At the end of the day, all it requires is somebody who can tell a great shaggy dog story.”

Read on to hear Mandvi explain how his Evil bosses Michelle and Robert King became involved in making the American version of Would I Lie to You? happen, then stick around for some Evil Season 3 scoop. (You know we asked him about that David/Kristen bombshell in the finale!)

TVLINE | My most curious, but not most important, question: Preet Bharara is a guest on one episode. How did he come to be involved?
I just literally emailed him. I mean, it’s part of the South Asian illuminati. [Laughs] We have a mutual friend… We really wanted guests who were not just going to be like the typical — I mean, we wanted comedians and we wanted actors, but we also wanted to go beyond that to find people like Preet or [fashion designer] Isaac Mizrahi or Ayad Akhtar the playwright. He came on the show and did an episode.

We wanted like a slightly more diverse group of guests and Preet came to mind right away. Because I know he’s funny and I’ve hung out with him at a party. He’s a good storyteller.

TVLINE | I saw Robert King [executive producer on both Evil and Would I Lie to You] tweeting the other day about how the two of you had been talking about the British version of the show right as Evil was getting started.
We were doing season one of Evil. And my wife and I started watching the British show, I think, in 2019. It was during the Trump administration and it was just sort of a respite from the insanity of the world… We would literally sit down at the end of the night and I’d just look at her and be like, “Do you want to watch Would I Lie to You?” And she’d be like, “Yeah.” We also had a child, so we didn’t have enough brainpower to sit there and watch a movie, you know? We’d just laugh and we’d have fun.

And then when I brought it to Robert, I said “There’s this great show. [My wife] Shaifali and I watch it, and it’s so funny. And we just use it as a way to like unwind at the end of the day.” And he started watching it and then the next time I spoke to him he said, “Oh, my God, I’m addicted to that show. I watch it all time. Michelle [King, Evil executive producer] was like, “He’s in his study, cackling at 2 o’clock in the morning, watching Would I Lie to You?” And then they both were like, “Why don’t we make the American version of this? Why has nobody done that?”

TVLINE | Do you know the stories ahead of time? Are you in on it?
I’m not going to say.

TVLINE | I mean, you are an EP and the host, so I think it would be forgivable if you had some inside knowledge.
Sometimes I have an inkling. [Laughs] 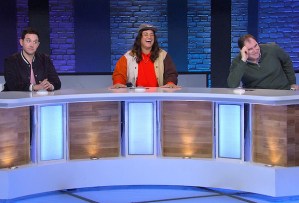 TVLINE | Was there ever a time where it went completely off the rails? The Richard Kind episode that I saw, for instance, people were losing their stuff left and right as he told his story.
[Laughs] Oh, yeah. He’s just great. I’ve known Richard for 20 years, and he was one of the first guests that we wanted on the show. Fisher Stevens was a guest on the show… He told this story that was one of the longest, craziest, winding stories. And we just kept trying to get back to like, “Wait, do we even remember what this story was about?”

He just went off and just was telling this crazy story about Aspen and a balloon ride, and the whole thing, and Chad Lowe. Everyone was just like, “Wait, what is this?” [Laughs]  And my job is to sort of make sure that we don’t completely derail, right? But I didn’t even know, like, where we were anymore. It was one of those situations where the story just was like a balloon ride. It just went off into the netherworld. So yeah, there were a couple of times that stuff like that happened.

TVLINE | Let’s talk Evil for a minute. You’ve said before that the Kings usually have a conversation with you, before a season gets going, about what you’d like to see happen for Ben. What was that like for Season 3?
This season, the theme of Ben’s character is that his brain breaks, and he’s sort of struggling with not being able to figure out things. He’s been working with David and Kristen now for this period of time, and he’s finding incredible frustration and doesn’t know how to deal with the fact that like these things keep happening, and he can’t find the answers. So he ends up going to his sister and ends up going to like a science league, which is a bunch of geeks all hanging out, just doing science stuff. 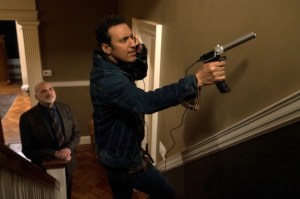 He finds his posse a little bit and reconnects to his roots of empiricism and science and a fact-based world. But again, you know, that doesn’t work out exactly the way he thought it would. [Laughs] … I think it’s made him a little crazy with all of this stuff. And especially Season 2, when he was dealing with like the succubus. He’s on the other side of that a little bit now, trying to figure out.

Last season he had that romance with Vanessa, and she turned out to be a bit wackadoo. He sort of falls into that trap again a little bit, you know? [Laughs] He’s clearly attracted to women who are a little bit crazy. 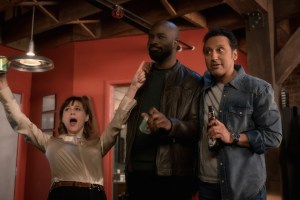 TVLINE | Since Ben, David and Kristen are such a tight working unit, I can’t imagine that he isn’t going to pick up on the fact that some weird stuff went down between the two of them at the end of last season.
Well, I think he does have his doubts… [Laughs] Sometimes we’ll joke about Ben just improvising a line where he’s just like, “What’s happening with you? What is going on? Are you guys sleeping together? What’s happening?!” Like, I just want Ben to break out one time, but he’s too professional. I think he doesn’t want to know. He’s sort of like, “Eww.”