The Vati tribe’s first Tribal Council was a tornado of misdirects, brutal betrayals and voter confusion — par for the course for this new era of Survivor. As a result of the chaos, Daniel Strunk and Chanelle Howell found themselves directly in the line of fire when their tribe returned to visit Jeff just two episodes later. After yet another tie vote, a blindsided Strunk eventually became the sixth person to get the boot, just one day before a game-changing tribe swap was set to shuffle the deck once again. (Read a full Episode 5 recap here.)

We spoke with Strunk Thursday to deep-dive through his 11 days in the game — from his brutal shoulder injury, to his tie-vote face-off with Hai, controversial fishing expedition and his rollercoaster relationship with Chanelle.

TVLINE | First off, how’s the arm doing these days?
DANIEL STRUNK | It popped out for the first immunity challenge, and was out for the entire challenge which was over an hour. It was out for a while. I have a pretty severe labral tear, and had the option of getting surgery, but decided against it. I went to two months of physical therapy. It sucked. But the good news is I’m not experiencing any pain anymore, and I have full range of motion. I just need to be very careful not to trip because it’s more likely to pop out again.

TVLINE | Let’s start at Vati’s first Tribal. Had Chanelle not lost her vote, I’m assuming Lydia would’ve gone?
Yes. If we had lost the first immunity, I think Lydia would’ve gone home as well. I actually think it would’ve benefited me to have lost the first immunity challenge, because if Lydia goes home before Mike loses a vote, then we have more of a numbers situation on my side.

TVLINE | You began the tie-breaker discussion by sort of showing your cards. You said you really didn’t want to draw rocks. Do you have any regrets starting the conversation that way, and if you could go back, would you have handled it any differently?
So the key thing to know… we’ve got to back up a bit. Everyone wants to start there because it’s the climactic moment, but it’s like, come on!

TVLINE | Lay it on me. Tell me everything!
The analysis really should [begin] the moment Chanelle got off the boat and said, “I don’t have a vote.” That’s the key moment. You have 30 minutes before Tribal, it’s been seven days and you’ve eaten 600 calories total, you have 30 minutes to defuse this bomb. What do you do?

Another thing to know: Before we left for that immunity challenge, Chanelle and I had a conversation, one on one. We both agreed that under no circumstances would either of us risk our vote. So when she says, “I lost my vote,” I interpret that as a betrayal of trust and a betrayal of the alliance, which I think is fair given the conversation we had. I decided in that moment to remain loyal to Chanelle as an ally. I was all-in on Chanelle. She was my No. 1. I truthfully would’ve gone to the end with her — she’s a great person and a great Survivor player, by the way. Wonderful social game. Better social game than Hai, Lydia, Jenny… she made one dumb mistake and lost the voting advantage, and it was not great, but her social game is very underrated.

So I decided to remain loyal. I decided to go with the plan of voting Lydia. I stayed with the plan even on the revote. And then you have the moment you want to talk about. So at this point, I had shown total and utter loyalty to my No. 1 alliance from start to finish up until this moment. And I demonstrated further loyalty… do you remember what I clarified with Jeff before everything went down?

TVLINE | Yes, you asked him if the rock draw would be four or two.
Yes, exactly! I clarified who would draw rocks. I had two allies I had to look after. I had Mike and Chanelle. I cared about them and I didn’t want them to have to draw rocks. I approached this thinking, “It’s three vs. one. Chanelle and Mike are totally with me. We’ve agreed we’re in an alliance together, and they’ll join me to try to convince Hai to flip his vote.” I wanted to communicate with them, “I have your back. I will not force you to go to rocks because you are my allies and you are safe, so join me in getting Hai to flip.” Was it a good approach? No! It was a terrible, terrible approach! I should have known in the moment that Chanelle and Mike would not do that, but again, seven days, eating 600 total calories of food… 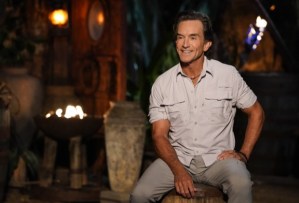 The best-case scenario would’ve been voting Lydia out if we had the votes. Medium-case scenario: They join the discussion, but try to act like they’re impartial. “Oh, we didn’t have a vote. Why don’t we discuss the pros and cons of Lydia and Jenny.” Very awkward to do that right in front of them, but let’s have a convo. Worst-case scenario is what happened. Mike and Chanelle both said, “This is not my problem. I don’t have anything to contribute. Go away Daniel. I am not involved in this.” At that moment, I feel totally hosed and betrayed. Especially after I could’ve turned on Chanelle the second she stepped off the boat back at the beach, and told me she lost her vote. I played it poorly! I’m not going to try and defend my actions. But I also had certain assumptions going into it that were wrong. It wasn’t that I was an idiot — well, I was probably dumb to have the perception that Mike and Chanelle would have my back. That was the mistake I made. That was the most catastrophic, fatal flaw and read I made in the game.

TVLINE | If you could do it again knowing what you know now, would you be like, “You know what? Screw it. Let’s go to rocks!” and just hope for the best?
Now here’s something to know — and put this in your article, this is very important! I thought there would be a swap the next day. I would have gone to rocks if I had known there wouldn’t be a swap. I was basing that off of 30+ seasons of Survivor where there’s a swap. I just thought, “For sure, there’s a swap, after this vote there will be 14 people left. We’ll go to two tribes of seven, and we’ll go about our way.” But alas, there was no swap. So that totally hosed me.

TVLINE | On to this week’s episode. You told Chanelle that if you both made the merge, bygones would’ve been bygones. Did you mean that? Would you have kept working with the OG Vatis at that point?
Yes, 100 percent. I was all-in on Vati. That was not a lie. If you look at all my actions, I had a hierarchy of alliances. It was Chanelle, and then it was Mike and Jenny. If you look at all my actions from start to finish until things go totally south, I follow that to a tee. I was utterly faithful to that hierarchy. Chanelle, I told everything. I told her Mike lost his vote. I told her Mike found an idol. Everything. I told Mike and Jenny everything that I didn’t tell Chanelle because they were No. 2. I was loyal and that would’ve been the case afterward. I was very loyal unless you consider drawing a hierarchy disloyal. If you think it’s disloyal to have allies, then I guess, sure, I’m disloyal because I preferred Chanelle, Mike and Jenny over Hai and Lydia. But it’s also called playing Survivor. 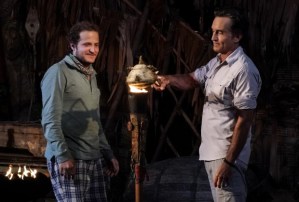 TVLINE | Were you at all aware that your tribe was talking smack about your swimming and fishing? They seemed a bit disgruntled that you would sit out of challenges, but then attempt to go fishing.
No, I had no clue. I found that out afterward. In hindsight, it makes total sense. I was not able to do swimming challenges during the game. The doctor on site told me, “Don’t do this. You’ll risk long-term damage.” The difference is when you’re snorkeling or fishing, you have control over your range of motion in a way that you don’t during a challenge.

Chanelle and I are on the bottom, what are we going to do? My strategy was, you need to demonstrate that you are totally not scheming. That you can be loyal at the merge. Going fishing was part of that. It’s like, “This guy is so not scheming, that he’s literally out there in the water.” Chanelle, on the other hand, was very much scheming. We took very different strategies — hers was the better strategy! Frankly, I was toast no matter what. I was going home. After that first Tribal, it was revealed to Hai that he was not in my hierarchy. He felt betrayed, and that I had wronged him, and there was just no way he was going to forgive me. That’s all it took. There were four votes until Mike got his vote back, and Hai got to call all of the shots because there were only four.

TVLINE | Now, Chanelle voted for Mike, which I’m guessing was to anticipate you possibly playing your Shot in the Dark. You didn’t, but did you consider it?
No. I was totally convinced I was safe, and that was stupid. I was wrong. I was convinced I was safe because of a conversation I had with Hai on the beach where I expressed to him how grateful I was to be out there playing. We had what I thought was a human moment where I shared that I hoped to represent sick children by playing, and we hugged, and I thought we really bonded in that moment. Because of that one conversation, I felt totally safe. Hai is an excellent Survivor player. In that moment, he totally snookered me. I was totally convinced I was safe. That’s how good of a play that was. I was bamboozled.

TVLINE | Chanelle tried to claim that you amping up your friendship with Mike was based on strategy, but you denied it in front of Jeff. But were you trying to tug on Mike’s heartstrings a bit?
That was totally real. Part of what makes Survivor a good show is that people are humans. They’re not robots. Maybe if I was a robot, I could calculate in my robot brain or computer chip that the way to win is to fake emotion and make Mike like you, but I’m a human being. People are human beings. It’s what makes it a good show because you see the messy interactions of humans, and in that moment, I was being very real.

I love the people that I’ve met. To this day, I’m wonderful friends with Mike. He doesn’t know this yet, but I’m going to invite him to my bachelor weekend. I’ve met his kids, they’re great! I play Words With Friends with Zach Wurtenberger‘s grandma. She’s really good, by the way. If America needed a Words With Friends representative to like, fight the aliens in Words With Friends, she would win. Also, it was already decided. I was going home. There was no need to kick me when I’m down. I was just having some humanity.