It’s about that point of the season where it’s entirely impossible to keep track of who has what on Survivor. So before we “dig deep” into Wednesday’s recap, let’s take stock of all the extra votes, amulets, beware advantages and idols floating around Fiji. A pre-cap, if you will, before next week’s tribe swap!! (Yep. We’re excited.)

So Drea, Hai and Lindsay all have a piece of the amulet advantage, which can only be used when all three pieces are combined together. As a whole, the amulet serves as an additional vote; with just two pieces, it transforms into a steal-a-vote; and if only one exists in the game, it’s a full-out immunity idol. It’s also only good until the Final 6.

Plus, as a result of winning the prisoner’s dilemma, Maryanne and Drea both earned an extra vote.

And then we have Wednesday’s episode, where Drea scored a Survivor hat trick by adding Ika’s beware advantage to her already robust quiver. During the night’s immunity challenge, she, Mike and Maryanne activated their idols with three magic phrases, and voilà! Three more fully realized immunity idols are now in play.

Phew. That was a mouthful. But now that we’re all refreshed, let’s kick back and discuss the rest of what happened in the episode titled: “I’m Survivor Rich.”

IKA | Rocksroy isn’t too pleased he was left out of the vote to boot Swati, and he’s feeling both “betrayed” and “duped.” It’s a wake-up call for him; his social game needs work, but he’s happy they can now be a strong four. Tori, however, has other plans. She’s still harboring resentment against Rocks, and she plans on jumping ship as soon as humanly possible. Keeping her around seems like it’ll eventually bite Ika in the you-know-where.

The next day, Drea and Romeo start idol hunting, and Drea becomes the lucky new recipient of the beware advantage… which is just laying around in plain sight? On a tree branch?! 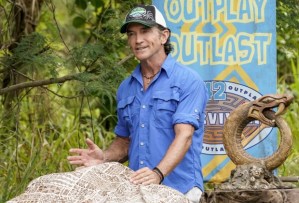 OK, Survivor Gods. We need to talk. We know you want these bad boys to be found (especially since all three of them are linked together), but make the players work for it! It may as well have been “hidden” in tree mail or placed right on top of their water well. Whatever. Anyway, with Ika’s idol now in hand, all three tribes got the goods.

TAKU | As Maryanne and Lindsay brag about their sick Mario Kart skillz, all of the chatter drives Jonathan up the wall. He removes himself from the situation to go fishing, but when he gets back, Maryanne gripes that he hit her as he chops bamboo with a machete. Seeing as she still has all her limbs and appendages, it’s safe to say she’s being a bit dramatic. Is the hunger finally getting to them?

VATI | Hai tells Lydia that Chanelle is hard to read, while Daniel is transparent. If they have to go to another vote, he thinks Chanelle is the way to go. Daniel, meanwhile, gives Vati a “B” for morale, but the dude’s radar is clearly busted. (Feels more like a “D” to me, but OK.) While he goes spearfishing, Hai and Lydia wonder why he can’t compete in challenges (due to his dislocated arm) but can go snorkeling like it ain’t no thang. They’re peeved, and like Taku, might also be getting a bit hangry.

IMMUNITY IS BACK UP FOR GRABS | Jeff comments on Maryanne’s jaw-drop as she sees that Swati has been sent home, which gives her the in to drop her bunny line into conversation for the nth time. Drea spits out her potato line, leaving the metaphorical ball entirely in Mike’s court. AND THEN HE SAYS THE SOCCER LINE. (Though he babbles far, far too long trying to sell it, which is awkward as all hell.) But behold, Survivor fans: Three brand new idols are born! Mike tells us it was a game-time decision, because he felt like he needed to get his vote back. This game’s about to get a lot more interesting.

For the challenge, tribes will race over a net ramp, untangle braided ropes to get a key, collect a machete and sandbags and knock down some targets. Along with immunity comes a reward: a massive tarp to keep them dry. The second tribe to finish gets a smaller version. The losers will forfeit their flint, plus another member of their tribe. 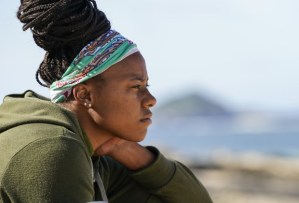 Ika takes a quick lead and are first to drop their sandbags and hit their first target, while Omar struggles like crazy with the ropes. Rocksroy hits target No. 2 for Ika before Omar can even free his key! Taku is down, yes, but not out. Jonathan steps up to the slingshot and narrowly cinches the win for Taku, sending Vati to Tribal. But first: Ika must send two players on another fantastic voyage. They select Lydia and Rocksroy.

VATI | Daniel knows he’s on the chopping block, as does Chanelle, so they both request one-on-ones with the rest of their tribe. Hai tells Daniel that Chanelle is 100 percent going home, just as Mike assures Chanelle that Daniel is the one getting ousted. Mathematically, with Mike’s vote now back in play, they have the majority and should be able to easily knock off one of their targets. (Keyword: “should.”) Unless, that is, Lydia loses her vote…

TREK | Lydia says she’s learning a lot about herself, including how to be comfortable in her own skin. She and Rocksroy try to feel each other out, but these two know how to maintain a steady poker face (unlike Evvie last season, who let it alllll spill out). They both decide to protect their votes, so this trek, my friends, is a wash.

TRIBAL COUNCIL | When Vati hits the hot seats, Mike says that despite losing a member, the tribe will remain solid. Daniel and Mike talk about sticking together and being friends after the show, but Chanelle doesn’t buy it. She thinks Daniel is greasing Mike’s wheel as a strategy, but Daniel says it’s true to who he is. Lydia then talks about how this vote is all about trust, but… uh, aren’t they all?

They vote, and it’s a 2-2 split between Daniel and Chanelle, with one odd “Mike” thrown into the mix. The group (minus Daniel and Chanelle) re-votes, and Daniel becomes the sixth person ejected from Survivor 42. (Read our Q&A with Daniel here.) “I kept my promise,” Mike tells Chanelle, who for some unknown and mysterious reason, wrote the guy’s name down.

As for next week: It’s time for them to drop… their… buffs!

Did Daniel deserve to go, and do you have any predictions for the tribe swap ahead? Drop your thoughts in the Comments!