Welp… somebody has to go first.

Unfortunately for Survivor‘s Zach Wurtenberger, that somebody was him after the Ika tribe suffered a crushing loss during the premiere episode’s immunity challenge. (Technically, he was the second player to exit the game, but the first voted out — read all about it in our weekly recap.) Since he was one of two solvers on the devilish, double-sided puzzle, Zach took most of the heat and was eliminated by a vote of 5-0. Not even his Shot in the Dark could save him from Jeff Probst’s decisive torch snuffer.

Here, Wurtenberger talks to TVLine about being a Survivor superfan, what went wrong at the challenge and why he decided he would never work with tribemate Tori Meehan.

TVLINE | As a self-described superfan, walk me through how it felt when you first walked up on the sand to greet Jeff Probst for the first time.
ZACH WURTENBERGER | The entire experience was a series of first after first after first. Every single moment was incredible. The first challenge, the first time you’re at the beach, the first Tribal Council. I wish there were more seconds, but the fact that I got to experience all of those firsts was truly incredible.

TVLINE | You guys filmed this season back-to-back with 41, so you didn’t know exactly what you were in for. Did producers tell you anything before the game started?
The only thing we knew going in was the 26 days. That was the only thing they let us know about the changes in the format beyond the fact that it’s a “new era,” and no one really knew what that meant. For me, as a superfan, I was like, “Oh, it’s a new era. That’s their new branding thing or whatever.” I don’t think I realized how many real changes to the show were going to come with that.

TVLINE | Tell me a bit about Rocksroy and his intense work ethic. What was your opinion of him after that first day?
I will say that Rocksroy, in the 30 minutes that he was not working on the shelter, was absolutely lovely. He was a fun guy and great to talk to. But yeah, man. He was trying to build the Boston Rob/Sandra shelter out there. And I don’t think he realized we had the bad beach. We were never going to have that good of a shelter! It was over the top, honestly.

TVLINE | What do you mean by the “bad beach”?
There’s the really pretty beach that Vati is on, where you’ve got a beautiful beach and that cliff structure in the background, and then you’ve got the one that’s got the gross tree and that’s ours. It was the same beach that [Season 41’s] Ua [tribe] was on. It’s a very ugly looking beach. As a fan, because I kind of know the beaches and stuff, I was like, “Oh, we got the bad beach!”

TVLINE | Real talk though: That puzzle looked hard! What went wrong there?
It was two things, honestly. Number one, we arrived at that puzzle about 15 minutes after the other tribes, so it was going to take a truly insane comeback for us to even have a chance. We were starting at a massive disadvantage. The issue with it was the pieces were double-sided, for the TV audience and for us seeing it. And I’m not putting all of the blame on Swati or anything because we were both screwing up, but she was putting all of the pieces in the opposite direction. If you watch the show, you can see the blues are different. She was putting them in reverse, which then meant all of my pieces were on her side. So I was struggling like, “Where are my pieces?” and I look over and I was like, “Oh, they’re all already in the puzzle.” Now, that could’ve all been helped if we had communicated more throughout.

TVLINE | It seemed like your tribe was going to be split in half, the younger players vs. the older ones. Did you get a sense early on that Tori and Swati were going to flip on you?
It wasn’t early on, it was more so after the challenge when Tori immediately goes and talks to Drea. Even though she was talking about Rocksroy there, I felt like, “Oh, this is her flipping. This is her making the move and trying to save her own ass right now.” Also, when Tori and Drea walk away on their own for 15 minutes and leave me, Romeo, Rocksroy and Swati, there are only two names that the four of us can throw out there in that moment. So my target was always going to have to be one of those two because I knew that the votes I was going to have to convince were Romeo, Rocksroy and Swati. 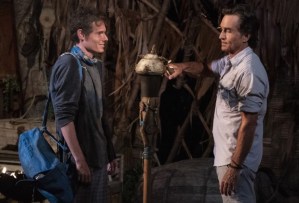 TVLINE | There seemed to be a growing rift between you and Tori. When did you decide you definitely didn’t want to work with her?
Tori is a very nice person, but there was that conversation they showed on the beach where she’s kind of back-talking me afterwards. I genuinely was going to her like, “Look, it’s one of us. I feel bad that one of us is probably going to be voted out, and I just wanted to say no hard feelings.” I was being very genuine with that. That was me in a real moment of weakness, just feeling awful. I left with a very sour taste in my mouth over that whole conversation. Walking away from that, I never wanted to work with Tori again in the game.

TVLINE | Walk me through your decision to use your Shot in the Dark. Did you know 100 percent that the votes were going to be on you?
I didn’t know it was going to be me. I thought it was pretty likely going to be me. But I did 100 percent know that my vote wasn’t going to be relevant at this Tribal Council because it was either going to be all on Tori or all on me. So I was like, “Well, I can increase my chances by 16 percent just by playing this, because my vote doesn’t have a meaning at this Tribal.”

TVLINE | Do you have any regrets? Is there anything you could’ve done differently that would’ve helped you survive the vote?
Yeah. I should have watched Sequester Season 3. Fan-favorite Tori Meehan would’ve been an easier target to get out had I just sat down and watched more reality TV.