Survivor is back for more blindsides and bloodshed, but is anyone else experiencing a serious case of déjà vu?

In the Season 42 premiere of the CBS reality staple, some things may have changed, though a lot has stayed exactly the same. (Did we really need the secret phrases and Shot in the Dark back?) But as Probst calls this new run “another evolution in the greatest social experiment seen on television,” we’re fine with giving him the benefit of the doubt. At least for now.

Eighteen strangers are once again split into three tribes (get the full rundown of castaways here), and the cast seems ecstatic from the jump. Maryanne tells us it “feels like a rollercoaster,” and she’s about to raise both of her hands and SCREEEEAM! Gotta love that youthful enthusiasm (even if I need a nap after just listening to it).

For their first test as new tribes, one person from each tribe will race into the jungle and untie two paddles from a cargo net. Another will jog down the beach to get two more paddles. Then, everyone will get in their boat to paddle around a buoy and collect a pair of sticks. First tribe to use the sticks to reach the flint will earn that, plus a pot and machete. “The new Survivor is fast, it’s difficult and it’s dangerous,” Jeff tells them. (Why does it feel like we’ve heard that line before…?)

The three players who jog down the beach have a decision to make: They can grab the paddles they need and mosey on out, or they can work together to receive an advantage. Lindsay, Drea and Hai decide to go for it. To help with the lie, they’re given mud and fake blood to rub all over themselves to make it look like they just endured hell. They grab their advantages and run back to the challenge, paddles in hand.

All three tribes paddle their way to the bamboo pole station, but Daniel’s shoulder looks busted from an earlier digger. It’s a tight battle, but Rocksroy seals the deal for the Ika tribe, earning them their camp essentials.

Medical comes out to check out Daniel’s shoulder, which is clearly popped out of its socket. (He says he “pulled a “Stephenie LaGrossa here,” so clearly the dude’s been watching for a few years.) Luckily, the show’s medical team relocates it for him, but he’s gonna have to be careful moving forward.

CAMP | At Ika, we meet Zach, a nerdy superfan; Swati, an Army National Guard studying at Harvard; and Tori, a therapist from Oklahoma fibbing about her occupation. The three youngsters vibe together, while Rocksroy, Drea and Romeo buddy up as the elders of the bunch.

At Vati, they must choose between Savvy or Sweat. In “Savvy,” they must solve a visual triangle riddle, but they only get two guesses to nail it. In “Sweat,” one tribe member must fill a large barrel with ocean water in four hours’ time. Mike, as the largest male of the bunch, sways the group toward the visual puzzle, as to not seclude himself from the rest. Luckily for them, they have Jenny, a creative director, who steps up to take lead.

Taku also opts for the visual puzzle, splitting chores up between the task and shelter building. The magic number is 51, and both teams solve it correctly and secure their camp essentials.

At Ika, Rocksroy struggles to rally his troops to finish chores before sunset. “It was like herding cats… and I’m not a cat herder!” he says. He tells us he’s a stay-at-home dad of a five- and seven-year-old, and that it’s a far easier task than dealing with twenty-somethings. (He does have the wherewithal of asking Drea if he’s coming off too hard, so kudos to him for that self-awareness.)

ADVANTAGE | Drea sneaks off to read her advantage. It’s one-third of an amulet, but all three parts must be played together. The fewer amulets left in the game, the bigger power they have. Three together have the power of an extra vote. Two can turn into a steal-a-vote, and one amulet alone has the power of a full idol. Hai calls the catch “crippling.” Should he take the other two out, so that his amulet becomes more powerful? 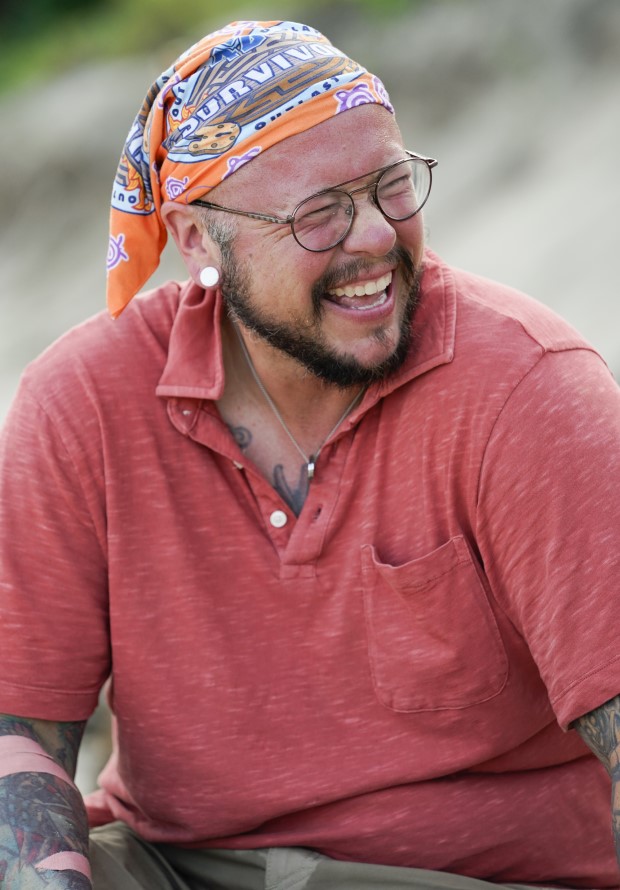 TAKU | Jackson tells his tribemates that he’s transgender, and says he didn’t want to hide his true self from them. When he told his parents, he wasn’t accepted and had to live his life away from them. Years later, when his mother got sick, he returned home to take care of her full-time. She ended up passing away, but she did get to know him better, and he wound up re-establishing his relationship with his father.

RISK OR PROTECT? | A boat arrives at the camps to collect a single tribe member. Maryanne begrudgingly hops aboard, as do Jenny and Drea. They arrive to the same island trek from last season, and begin their hike to the summit. They separate to make a private decision, and of course, it’s the prisoner’s dilemma sitch from last season. (Snooze.) Drea and Maryanne opt to risk their votes, but Jenny protects hers, thereby handing the other two a gift in the form of an extra vote advantage.

JEFF’S VISIT | Jeff wants to have a one-on-one with Jackson. (This can’t be good.) He tells him he was a homerun in the casting process, but, the host explains, players are supposed to keep casting up-to-date on any medical changes. The day before they began shooting, Jackson disclosed new info. The show let him start the game, but clearly something’s up.

Jackson’s wife is a nurse, and they had discussed him getting off lithium, figuring he’d be fine by the time the game began. It had nothing to do with his transition; rather, the stress of taking care of his mom was the reason he started taking it. Jeff says he wasn’t going to mention specifics on camera, but since Jackson opened up, they continue their dialogue. (Talking it out is the only way to get rid of negative stigmas, says Jackson.) Jeff notes that there will be side effects due to the game’s stress, starvation and dehydration, and since the drug might still be in his system, it’s too dangerous for Jackson to continue.

When they break the news to the tribe, Maryanne is devastated, and honestly, who isn’t?! In just this short time, Jackson seemed well-liked by his tribe, and already left an indelible mark on the season. You love to see someone who’s so open and honest, and not afraid to share his journey. We’ll miss ya, Jackson.

IMMUNITY IS NOW UP FOR GRABS | For the challenge, each tribe starts out in the water on a platform. They must swim to a boat, collect some chests and drag it all through a tracked course. Then: Complete a puzzle. The last place tribe will lose their flint. Jeff then tells them the Shot in the Dark is back, just in case you were worried about that UTTER FLOP OF A TWIST being MIA. 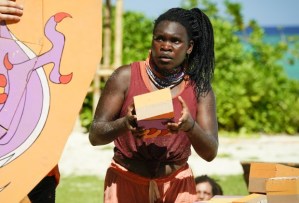 Taku takes a quick lead, and everyone on all three teams looks exhausted. Vati gets to the puzzle first, but Taku comes back to win the challenge. Jenny’s visual skills once again comes in handy, and she helps Vati secure the second place finish, sending Ika straight to Tribal Council.

STRATEGY | Zach apologizes to the team for his lack of puzzle skills, while Tori takes a moment to dispel rumors about her having an idol. She and Drea talk it out, and after clearing the air, they agree on trying to get Rocksroy out, since he gassed out during the challenge. Meanwhile, Swati throws Zach under the bus to Rocks, saying he pretty much gave up during the puzzle.

TRIBAL COUNCIL | Drea tells Jeff she wants to keep the tribe strong (which is pretty much the opposite of what she said before, but OK), while Swati says she’d give up a pinky to not be at Tribal right now. (Extreme!) Tori says she knows she’s on the chopping block, while Zach claims to know about Tori slandering his name.

Jeff calls for the vote to begin, and Zach uses his Shot in the Dark! (Bold choice for a first vote.) Then, Drea receives her extra vote advantage. Before Jeff reads the votes, Zach opens his tiny scroll and he is… NOT SAFE. But the kid’s hunches were spot-on. He becomes the first person voted out of Survivor 42.

Were you sad to see Jackson go so soon? Did the Ika tribe make the right call? Grade the premiere below, then light up the Comments!