Who’s returning to 9-1-1: Lone Star? Which New Amsterdam couple will be tested? What happens when Moon Knight meets Midnight? Read on for answers to those questions plus teases from other shows.  (You can and should email any brand-new Qs to InsideLine@tvline.com.)

On 9-1-1: Lone Star, will we see Judd Ryder’s father this season? –Carlynn
Funny you should ask. Yes, Barry Corbin will be back on 9-1-1: Lone Star as Stuart for an episode this spring. We hear it’s a big one for Judd and Wyatt — you know, that teenage son he didn’t know he had — so we’re curious to see how Corbin’s character will factor into the story.

Is there anything you know about how Midnight Man (R.I.P., Gaspard Ulliel) plays into Moon Knight and that story? –Rebecca
The late actor first shows up in Episode 3 as Anton Mogart, the enigmatic possessor of something that Marc Spector desperately needs in order to thwart Arthur Harrow. Whether Mogart is inclined to part with that special something, though….

Do you have any idea if Moon Knight will have any end-credits scenes? –Jeff
At the recent press junket, directors Mohamed Diab and Justin Benson and Aaron Moorhead all pleaded the fifth when we tried to confirm any upcoming “bonus” scenes, while executive producer Grant Curtis hedged, “The Marvel story is never ending, so this story continues one way or another, whether it’s in the end credits or beyond.”

Will 9-1-1‘s Maddie ever get a “begins” episode? –Sarah
It’s funny that you should ask about a potential “Maddie Begins” episode, because that is something Jennifer Love Hewitt “had always wondered about also,” she tells TVLine. The question is: Have Maddie’s origins already been thoroughly explored? “After the Big Bear episode with Doug, then the Buck episode where we saw so much of young Maddie and her relationship with their parents, I don’t know that there’s more to tell,” Hewitt says. “I’m always happy to dig into old Maddie stuff, because when you see who she was you understand who she is. I would love to do it, but I don’t know that there’s more to do there.” 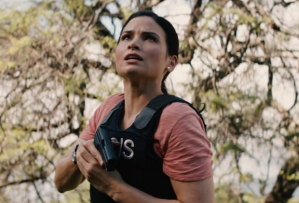 Any early buzz on what NCIS has planned for its season finale? –Deb
I picked Katrina Law’s brain during our recent Zoom, and she said, “Apparently I have a stunt double” for the May 23 finale, “which always bodes well for good, fun action. So hopefully that sticks and we have a big, huge, surprise ending. But that’s above my paygrade — they don’t tell me anything!”

This week’s Halo wasn’t all we’ll see of Bokeem Woodbine, is it? — Tanya
Nah, it sounds like the Paramount+ series will check in now and again on Soren and Kwan (played by Yerin Ha), while Master Chief deals with whatever Dr. Halsey has up her sleeve. “Kwan is in good hands; Soren is a very capable space pirate,” Pablo Schreiber told me. “Their adventures are linked for most of the first season, and are definitely a fun sideshow in the Halo universe.”

Can you please look into the status of Disney Channel’s Sydney to the Max? Apparently it’s canceled, but fans such as myself want confirmation. –Grant
I can confirm that Sydney to the Max concluded after three seasons last November, with all episodes available to stream on Disney+. 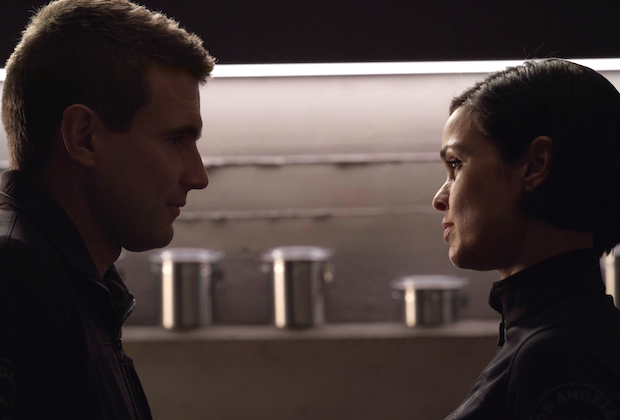 Anything you can tell us about the relationship between S.W.A.T.‘s Chris and Street? –Jenny
Lina Esco, like “Stris” fans, is hoping the season ends with some resolved sexual tension. “I’ve heard about the whole ‘Stris’ phenomenon and how the fans want this unrequited love that’s been simmering for five seasons and is so tumultuous” to pay off, she told me. “I hope that we can give the fans that fix that they need. We have three more [episodes] to shoot and I haven’t seen the scripts, but I’m hoping they do something.”

Is Rosalind Dyer ever coming back on The Rookie? –Mariah
“You never know!” says Annie Wersching, now Star Trek: Picard‘s Borg Queen. “I was originally just going be on for that one [Season 2] episode, but they keep finding ways to visit her again in prison. All of [Detective] Armstrong’s cases, I think in the real world, would have been questioned after [he was outed as being dirty], so in theory, her face could be seen again….” 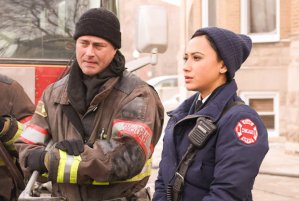 Can you tell me what’s coming up for Chicago Fire‘s Stellaride? –Fiona
I can tell you that what’s not coming up: any third-party shenanigans. Wendy Seager has been appearing a lot this season, so we asked her portrayer if Stella should be concerned about her fiancé’s OFI friend/partner. “I don’t think so. Her and Stella get along, she backed Stella with Girls on Fire…,” Andy Allo said. “It’s easy to pit two women against each other, [but] I think we’re cool. Severide [is a] very charming, good-looking guy, but I think they just make a good team. I don’t know what the writers have up their sleeves, so I don’t know what they’re planning, but I think Seager can appreciate Severide for his talents, like, ‘I just admire you, and I want you to work with me because you’re good at this.'”

With all the Rick Grimes movies seemingly in limbo, what’re the odds of Rick or Michonne showing up in the final episodes of The Walking Dead? –Andrew
Our resident Walking Dead expert Charlie Mason guesstimates that the chances are in the realm of… slim to none; rather, the duo seem likelier to show up on one of the spinoffs, to offer a jolt. However, this Sunday’s penultimate Season 11B episode of the AMC drama does include a throwback to something, if not someone, that will give fans a charge, especially if they are ‘shippers of a certain former couple. 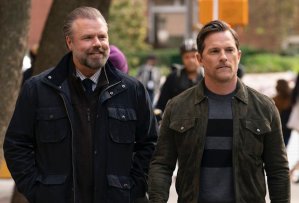 Anything on my low-key New Amsterdam favorite, Iggy? –Rod
According to Tyler Labine, we haven’t seen the last of Iggy’s flirtatious assistant Trevor (played by Ryan Faucett) — and it sounds like that is going to cause big trouble for Iggy and his hubby Martin. The storyline has “really opened up what has otherwise been a one-sided relationship with Martin and Iggy,” Labine shares. “Iggy flails, Martin is the rock. Martin is just like there for him, blindly supporting his husband, which is lovely. [But] that’s not how things are in reality. So we’re going to get to see a whole another side of Martin coming up. People have a limit. Even if they love somebody, they have a limit.”

Still crossing my fingers for Legends of Tomorrow renewal. Any scoop on Season 8, if there is one? –P.J.
If the show is renewed, Zari will indeed be sans her special abilities after handing over her totem to Nate in the Season 7 finale. “We don’t want her to have superpowers anymore,” co-showrunner Keto Keto Shimizu explained to TVLine. “It feels like Zari is a different kind of superhero and someone who’s going to have to discover a different kind of power that she’s already started tapping into [in Season 7]. Her incredible kindness and empathy, and her willingness to go above and beyond to help somebody in need, really is her superpower, and we want to show all the ways to celebrate that as her story continues. She’s not someone who needs to blow down doors or to send hurricanes after people — that didn’t feel right for her anymore — which is why she so willingly parts with it at the end of this season.”

Do you want scoop on a favorite show?Email InsideLine@tvline.com! Questions left in Comments will not be read and may very well count against your final score. (With additional reporting by Vlada Gelman, Andy Swift and Keisha Hatchett)