This week’s This Is Us kicks off the final season’s “Big 3 Trilogy,” a triptych of episodes that offers fresh insight on the Pearson kids’ current crises. Kevin is up first, and his hour is (unsurprisingly) fraught with flashbacks to feeling inadequate and a present-day story about trying to actually be he man all the time that he kinda-pretends to be sometimes.

The ep also shows us the birth of Big Three Construction, aka the company whose logo we glimpsed on a piece of note paper in the flash-forward to Kate’s wedding. On the one hand, It’s good to see Kevin finding some purpose. On the other, we wish Cassidy didn’t have to have such a gut-wrenching near-death experience in the process.

Read on for the highlights of the Milo Ventimiglia-directed “The Guitar Man,” and then keep scrolling for our chat with Justin Hartley about how, after Episode 10, the series will be “almost like a completely different show going forward.” 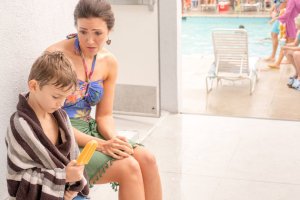 WE’RE FAR FROM THE SHALLOW NOW | In the Way Back Times, Jack and Rebecca take the elementary-school-aged Big Three to the community pool. Kevin really wants to dive into the deep end, but he doesn’t know how to swim. So Jack takes him into shallower waters and attempts to teach him; it doesn’t go well. Eventually Jack has to fish his son out, sit him on the side and explain that he’s not ready for the deep end, and everyone is sad.

Jump to Thanksgiving night, after Kevin left his mom’s house and wound up at the same pool, which is now defunct. Randall and Kate find their brother sitting in the deep end of the pool’s empty basin, drinking and feeling sorry for himself. He rambles about how he belongs in the shallow end because he’s so, y’know, shallow. “I don’t have the right stuff underneath me. I don’t have the, uh,” Kevin begins. “Foundation,” Randall supplies. (Side note: Because I’m condensing the storylines into chunks rather than skipping around, as the episode does, it’s hard for me to convey how painfully on the nose this line is. But, as you’ll see later, it IS.)

Kev goes on, musing that maybe he’ll quit acting and stay in Pittsburgh in the hopes of becoming a “solid” guy like their dad. “He put a roof over our heads,” he says. “Maybe I’ll do that.” Then he expresses a desire to sleep in the deep end but winds up leaving with his siblings. Kate tells him that he’ll be a screw-up for a while, but she has a feeling he’ll figure everything out eventually.

‘CELEBRITIES, THEY’RE JUST LIKE US’ | Off of Kate’s post-Thanksgiving advice that Kevin just needs to “parent with confidence,” he decides that he’s going to take both twins to the cabin during a break in The Manny‘s production schedule. (“Are you insane?!” Kate says, not realizing how much he’d take her statement to heart. “At least go on some trial runs first.”) Nicky and Edie will be there, he reasons, as will Cassidy — who’s overseeing construction of the new house — and her son, Matty. 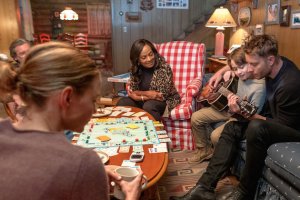 Kevin soon realizes he’s seriously underestimated how tough traveling with one baby, let alone two, can be; the cross-country flight is hellish. “Celebrities, they’re just like us, am I right?” he quips multiple times to his fellow passengers. “You already said that, and I don’t know who you are,” the guy sitting across the aisle deadpans. By the time he gets to the cabin, Kev is supremely frustrated, and he lashes out at Cassidy when she lets him know that his architect made a mistake that resulted in the need for her crew of military veterans-turned-construction workers to bust up the already-poured foundation and redo it.

He apologizes at dinner that night, and things seem to ease. Everyone plays Monopoly. Kevin attempts to teach Matty how to play the guitar, which, good luck kid. Nicky and Edie dance. At one point, Kevin notices that Cassidy has lapse into a thousand-yard stare; it’s clear she’s not doing well. But when she realizes he’s looking at her, she plasters on a smile.

Later that night, Kevin is awoken by a call from the hospital: Cassidy has been in a car accident.

This Is Us' Kate's Wedding Flash-Forward: Your Frame-By-Frame Guide to Every Clue

CASSIDY IN CRISIS | Nicky and Kevin rush to the emergency room, where a doctor tells them that she hadn’t been drinking, she’s got a broken arm and clavicle, and she’s going to be OK. Kevin is relieved that it wasn’t a DUI situation, but when Nicky hears that Cassidy drove straight into a pole, he knows what’s really up. 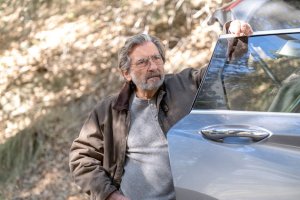 He reminds Kevin that Cassidy worked in Human Intelligence during her time in the military, which meant that she had to do and/or witness some very terrible things. “People like Cassidy, they don’t give you a heads-up when they’re not OK. You find out the hard way,” Nicky tells him. He reminds him that Jack drank “in secret, trying to forget” his time in Vietnam, and that Nicky had a gun easily accessible in his trailer when Kevin found him. Kev decides to stay overnight at the hospital, and Nicky tells him to “just be” rather than try to help Cassidy.

So Kevin spends the night in the waiting room, where he can’t stop himself from monologuing at the only other person sitting in the hard plastic chairs. “I want to be the kind of man who does the right thing because it’s the thing to do, the kind of man that’s there,” he says, later wondering “How do you know if you are” that man, “or if you’re acting like you are?” (The other man waiting, by the way, wants nothing to do with Kevin’s nonsense. I like him already.)

Kev is sitting by Cassidy’s bedside when she wakes up, her face bloodied and bruised. “I’m here. I’m not going anywhere,” he tells her. She haltingly tells him how she sometimes goes for drives to calm her mind and to distract herself from thinking about the people she left behind, “the ones I betrayed.” But the night before was the opposite: It was wonderful to be among friends and family, and “I just wanted it to last forever, but I knew it wouldn’t.” So she went for a drive to prolong the night’s end, but got tired “and I didn’t fight the sleep,” she says, crying. Nicky arrives and sits on her bed, stroking her hair as she sobs. 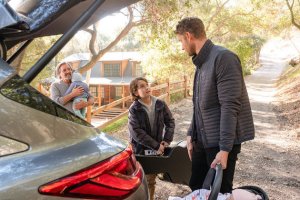 BIG THREE CONSTRUCTION IS BORN | Back at the cabin, Kevin helps Matty paint a card for his mother, then sees the boy into the care of his dad. (Hi Nick Wechsler!) And when Cassidy is ready to come back to the cabin to convalesce, Kevin floats the idea of hiring more vets to build more homes — and that’s where the Big Three Construction logos he was sketching earlier come into play.

On the (much smoother) flight back to California, Kevin has the babies under control. “You’re good,” a flight attendant notes. “I’m getting there,” he replies.

Keep reading for Hartley’s thoughts on Kevin’s epiphany, as well as how the final season’s Big 3 Trilogy will leave Kevin, Randall and Kate forever changed.

TVLINE | How do you think Rebecca’s advice from the last episode, for her kids to be “fearless” in their lives, affects what Kevin does in this episode?
It inspires him to do something to take action. Much like an actor hears “Action!” and they feel like they have to do something. When Kevin hears his mom say that to him, that speech that she gives him, it makes him feel like he has to do something now, and then he realizes that that’s not really what she meant. And what he ends up doing is something really beautiful. He decides that his life’s purpose is actually something really beautiful.

TVLINE | I was intrigued by his line in the waiting room about being a solid, dependable person versus acting like be a solid, dependable person. Why do you think that distinction matters so much to him?
Because I think it’s his way of saying, “Look, I know what’s right from wrong. I’m not asking what’s right from wrong. I’m not really concerned with that because I’ve got that covered.” It’s kind of sad, but honestly I think the truth is he wants to be a really good man. And that doesn’t just mean knowing the difference between right and wrong, or doing the right thing. Because you know there’s a difference between doing the right thing because you don’t want to get caught, and get in trouble, and doing the right thing because that’s what you f–king do: You do the right thing and you don’t ask questions about it.

… Also, a lot of that doubt is self-inflicted. I mean, I do think he’s figured out a lot. He’s just been through a lot and second-guesses himself. It’s part of the way he’s designed, so he’ll probably always have that.

TVLINE | That’s a very exhausting process for him, I would imagine.
Yeah, for me, too! [Laughs] I get to walk through this with him. It’s like, “Dude, come on! Get this s–t together, let’s go!” [Laughs] 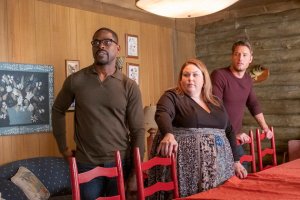 TVLINE | Talk to me about how hard it is for him to just sit there during that scene.
He’s a very sweet guy. He doesn’t like to see people suffering, and he wants to fix things. And sometimes you realize its part of being a man too, I think it’s we’re wired that way, and it’s a beautiful thing. And I love that I have that in my personal life, but it also can be a hindrance when you feel like you have to always fix things. And sometimes things just suck, that’s the way it is, but I’ll always have that. I think Kevin does too… I love that about him, but he’s getting better. He’s getting better at being there for people without being unintentionally in their way.

TVLINE | OK. Give me a tease about anything past what we’ve seen so far, the farther out the better.
The place that we leave these three off at the end of Episode 10, where Kevin and Kate and Randall are in their lives, seems like they’re on a path and they’ve figured everything out. And what you realize shortly after is the decisions that those three made about what they’re going to do is almost like a completely different show going forward. You’re going to see all three of them behaving in ways where you go, “Oh, well, that’s totally different than we’re used to” — and for good reason.