If you tuned into Wednesday’s Masked Singer Season 7 premiere to see the chaos that allegedly ensued when former New York mayor Rudy Giuliani reportedly was unmasked as a contestant… better luck later this season?

The well-known advisor to former President Donald Trump was nowhere to be seen during the episode, despite reports that his unmasking in the season’s first episode caused some of the show’s judges to walk off the set in protest. (Fox declined to comment on the original report and had no comment when TVLine checked in Wednesday.)

But that’s not to say that the season-opener was drama-free. One contestant literally lost his head! Read on for the rundown, and to find out who got unmasked.

THINGAMABOB | This season’s schtick has the singers divided into three categories: The Good (Prince, Firefly, McTerrier, Armadillo and Ringmaster), the Bad (Hydra, Queen Cobra, Ram, Jack in the Box and Cyclops) and the Cuddly (Space Bunny, Lemur, Baby Mammoth, Miss Teddy and Thingamabob). Thingamabob strikes me as the stuffed-animal version of Stranger Things‘ Demagorgon, but I suppose someone might think he was cuddly? He sang Bon Jovi’s “Wanted Dead or Alive” pretty well, but the song is a karaoke go-to for a reason: Can’t most people belt it out rather easily? Clues included: Hotel California, a tackle box and fishing net, a couple of quarters and an eagle. (My guess: someone who played for the Philadelphia Eagles NFL team?)

MCTERRIER | I’m not sure if McTerrier’s decision to end Loverboy’s “Working for the Weekend” with an extended, in-character howl was an inspired choice or just a good cover for a missed note — either way, it worked. The kilt-wearing canine seemed slightly incapacitated by his costume… and then very incapacitated when he nearly fell off the stage and lost his giant, furry head as he struggled to right himself. (Don’t worry, a member of the production staff grabbed it and helped him put it back on while the judges turned their backs.) Clues included: a candle, a terry towel, an ax with a star on it, a cake, a gold record and “the edge.” (My guess: someone who’s not actually Scottish, despite that accent.) 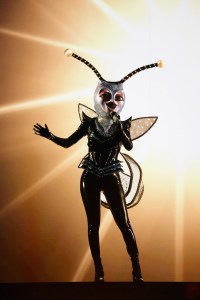 FIREFLY | In the second and by far more dramatic hiccup of the evening, Firefly took the stage to perform Chaka Khan’s “Ain’t Nobody” but only got a few notes in before she started coughing and had to stop singing. As she bent in half, the judges called for a medic and Ken “I’m a Doctor” Jeong ran up on stage. Nick Cannon later updated us that Firefly was being looked at by a member of the show’s medical staff, and she eventually came out to re-do her performance. She was good! Clues included: Tyler Perry, Apollo Theater, live comedy, the Statue of Liberty and a microphone. (My guess: It’s not her, so why do I keep thinking about Abbott Elementary‘s Sheryl Lee Ralph?) 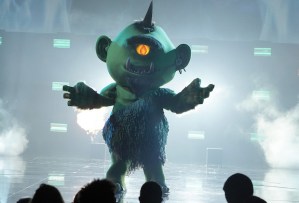 CYCLOPS | The one-eyed wonder sang “My Sacrifice” by Creed, and it was… fine? Clues included: a compass pointing southeast, a turtle wearing a cowboy hat, 4 oz., and a comic book. (My guess: … no clue!)

RAM | The Ram is a little aggro, but his rendition of Cheap Trick’s “I Want You to Want Me” was on point and entertaining. Clues included: Hamlet x MacBeth, antlers, touchdown, quarter return/quarter back and a horse/colt. (My guess: Some football guy, maybe from the Indianapolis Colts or the Denver Broncos?)

THE UNMASKING | McTerrier was Season 7’s first casualty. When he was unmasked, he was revealed to be Ace of Cakes/Food Network star Duff Goldman.

Now it’s your turn. What did you think about the premiere? Grade it via the poll below, then hit the comments!