That’s it for Jess LaCroix (played by Julian McMahon) on FBI: Most Wanted.

The CBS procedural bade a shocking farewell to the Supervisory Special Agent in Tuesday’s episode, which saw him shot and killed while pursuing a dangerous domestic abuser. His on-screen demise was foreshadowed back in January, when McMahon announced that he was leaving the show after three seasons.

The hour began on a much lighter note, with Sarah playfully chiding Jess for his not-so-great efforts painting their dining room — a project he’d never done before but found to be relaxing. Jess suggested they head to Bali for their vacation, and that was too expensive so they settled on the Bahamas instead. Unfortunately, he would never make that trip.

At the end of the hour, the team tracked their killer to a hospital in New Jersey, and Jess found the missing victim in the parking lot. As he helped the injured woman up, the fugitive opened fire on both, and caught Jess in the neck before being taken down by the team. LaCroix’s final moments were of him bleeding on the ground as Barnes pleaded with him to stay with her. 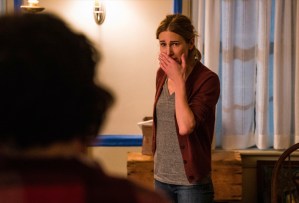 In the next scene, a teary-eyed Hana and Barnes broke the tragic news to Sarah, handing her Jess’ bloodied badge as confirmation. Heartbreak filled the dining room as Sarah broke down, realizing he’ll never finish the walls or use the nonrefundable tickets to Bali she was going to surprise him with. The episode ended with Sarah and Jess’ father Byron at Tali’s boarding school in Canada bracing to deliver the awful news just beyond the door.

In the conversation below, executive producer David Hudgins breaks down why the writers chose that tragic ending for LaCroix, and what his death means for the rest of the team.

TVLINE | LaCroix’s death was a huge shocker. Did you consider other options aside from killing him?
We did consider other options. We knew with a pretty fair amount of lead time that Julian [McMahon] was going to be leaving, so in the writers’ room, we started discussing what that exit might be. We talked about every possible iteration of it, and ultimately, what [we] kept coming back to session after session was, ‘Look, this is Most Wanted. We’re chasing the worst of the worst, the most dangerous of the dangerous, and there is a very real risk associated with the job.’ We ultimately decided that that was true to the premise of the show, that risk of being shot or killed in the line of duty. We just felt like it was appropriate and emotional and tragic.

TVLINE | In a perfect world, would Julian have given you more of an advanced warning that he wanted to leave so that you could plan a longer story for his exit?
It was not like that. We knew it was coming and we were trying to figure out the best way to do it. The story of the week about the domestic abuser had parallels and spoke to Jess and Sarah’s own experience with [Sarah’s ex-husband] Hugh from last season, so we thought this was the right episode to do it. And [Jess’ death] just happens to be… part of serving the premise of the show. You never know when something like that can happen.

We did have a specific discussion in the writers’ room about if it’s going to happen, it’s going to happen in a heroic way, which is [why] he gets shot trying to protect the woman that they’re rescuing. We also decided that we want to play the immediate emotional fallout from it, which is why we see Barnes and Hana tell Sarah, and then they get Byron and they go to tell Tali. It’s not just going away, either. The processing grief, the loss is all going to play in the show over the next couple of episodes.

TVLINE | A lot people were surprised when he announced he was leaving. Can you set the record straight about the reasons for his exit?
He wanted to leave to go on to other creative pursuits. That’s what he wanted to do and we honored that.

TVLINE | Dylan McDermott is stepping in for McMahon. We know him from Law & Order: Organized Crime as Richard Wheatley. Since the Law & Order universe connects to both One Chicago and FBI, did you ever worry that people might see him as Stabler’s evil nemesis?
I do not worry about it because I think we’ve created a very compelling character for him. I think he’s an amazing actor and he brings everything in his repertoire to every part he plays. And so, for this one, it’s not going to feel like that. He’s already filming and he’ll be coming into the show [beginning] April 12… We already had a conception of the character and we were like, ‘This is perfect. He’ll be great.’ We’re closing one chapter of the book and we’re starting the next one. 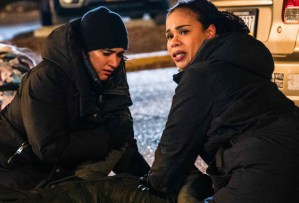 TVLINE | Have we seen the last of Jennifer Landon as Sarah?
There are stories coming up in the episode that involve her, and also Terry O’Quinn, who plays Jess’ father. We wanted to play out the loss and the grief, and see how they deal with it. Plus, I just think they’re both amazing actors and I love having them so there’s more story for them.

TVLINE | This is such a big loss for the team. Who do you think will take his death the hardest?
It’s interesting because Hana and Barnes were there from the beginning. We always referred to Barnes and Jess as work spouses. They work together but you also just felt like there was a bond between them outside. And with Hana and Jess, I always felt like there was a special bond there, too.

Watching the two of them deal with it in particular, because they knew Jess the longest and they’ve been on this team the longest with him, that’s going to be something very interesting to follow. People grieve in different ways. Some people are angry and lash out, some people get internal and quiet; everybody does it differently. I think these follow-up episodes are an opportunity to explore how everybody grieves differently, and what that does to the team [and] the pending question of who’s in charge now? Until somebody new comes in, this idea of, ‘How do we do this without Jess around?’ is part of the story of the next couple of episodes.

TVLINE | Is there anything else that you can tease about the journey ahead for our team as they forge ahead without Jess?
I keep jumping back to this example of closing one chapter and writing a new one. It’s always going to be a manhunt show where we’re bringing somebody to justice. That’s the drive, that’s the drama, that’s the show. Seeing how this team is going to do this with Dylan in charge — and we’re doing a six-episode arc that we’re constructing for his character and the team that will end in the finale — I think it’s going to be different and fun and good.

TVLINE | Because this show is part of the FBI expanded universe as well as One Chicago and the Law & Order universe, do you anticipate the events of this episode affecting any of those other shows?
[FBI’s] Isobel is in the next episode. She comes in to talk with our team… about Jess. She obviously had a relationship with him as well, so it’s definitely filtering into that universe. I could see it filtering into International because we’ve established that the people in these three shows do interact. It would make sense to me that there could be some acknowledgment of it.