Another FBI: Most Wanted cast member is handing in his gun and badge.

Julian McMahon, who has starred on the CBS procedural for all three seasons, has announced that he is leaving the series to pursue “additional creative pursuits,” our sister site Deadline reports.

“Over the past few months, the producers of FBI: Most Wanted and I have had discussions about my departure from the show in favor of additional creative pursuits and the transition of my character Jess LaCroix,” McMahon said in a statement. “These ongoing conversations have given us an opportunity to orchestrate a seamless and productive way for me to leave the show.”

McMahon has starred as team leader Jess LaCroix since Most Wanted debuted as a spinoff of FBI in January 2020. The actor reportedly approached the producers about his desire to leave the series earlier this season. 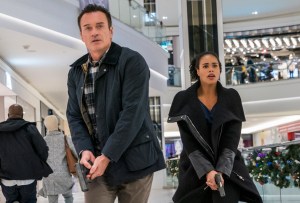 “I would like to express the gratitude and admiration I have had working with Dick Wolf and Peter Jankowski,” he added. “I’m extremely proud of the work we have done together and put the development of this show, and my character Jess, at the top of my professional experience list. I wish the show, and its cast & crew, the greatest success in the future. I am grateful to have had the opportunity to play Jess; he is a good man.”

McMahon’s final episode is scheduled to shoot next week and is set to air on Tuesday, March 8. The episode is expected to introduce a new team leader to fill the void left by LaCroix’s departure.

“We are saddened to see Julian leave,” producer Dick Wolf said in a statement. “His portrayal of agent Jess LaCroix has been a key factor in the success of FBI: Most Wanted. We will miss him and we wish him the best in his next chapter.”

McMahon is the second major cast member to exit FBI: Most Wanted this season. Kellan Lutz, who played Special Agent Kenny Crosby, left the show after the Season 3 premiere, which saw Crosby suffer a gunshot wound and return home to Oklahoma.

Will you miss Jess LaCroix on FBI: Most Wanted? Share your reaction in the comments.