So now we have a definite, devastating answer as to how Yellowstone‘s Duttons came to settle in Montana.

As last week’s 1883 heavily hinted, Elsa “Lightning Yellow Hair” Dutton succumbed to her arrow wound in Sunday’s season finale. As she started to fade, her father, James, rushed her to the land that would eventually become his family’s ranch, and she picked the spot where she wanted to be laid to rest. A short time later, as she and James sat under the tree she’d selected, she died. (Read a full recap here.)

“Elsa was his heart and soul,” Tim McGraw tells TVLine. “Elsa meant everything to him, and he wanted to find a place that he could lay her down and put her to rest where he could see her every day.”

So how do the Duttons build a new life in a remote spot after such horrifying loss? In separate interviews, we asked McGraw and executive producer David Glasser to give us the lay of the wild new land as the Paramount+ series heads into its “next chapter.”

TVLINE | Margaret had a line a few episodes back about how their final destination better be worth it, because the Duttons already have sacrificed so much. But the loss of a child is never worth it — talk to me about how that will affect James and Margaret’s marriage moving forward?
TIM MCGRAW | They have a really, really deep strength and love for each other. I don’t think that that’s going to go anywhere. But it’s certainly going to put a huge strain on their life, as it would anyone in that situation or anyone that’s lost a child. It’s the most tragic event you could ever have in your life, so there’s going to be profound effects on both of them, and probably profound effects on their relationship. But their strength and their love for each other, in my mind, will carry them through.

We at least know that they’re together 10 years later, because of the flashbacks in Yellowstone. [Laughs] He might have taken a few lumps.

TVLINE | Tell me about shooting Elsa’s death scene with Isabel May, and don’t be afraid if I start to weep openly while we’re talking.
MCGRAW | It was devastating. I don’t think we shot it [more than] four or five times. The very first time we shot it, the very first take of it, Isabel and I both were just completely falling apart, and we couldn’t help it. Through the whole scene we were both just sobbing. Then we finished the scene, and Taylor [Sheridan, series creator] goes, “Cut!  All right, we got that one out of the way, now let’s cut that s–t out.” [Laughs] So, we did it a few more times and they were all pretty emotional.

The time before the one they used — and this is what a pro Isabel is — we’re laying there, and right before we’re getting ready to roll, she sort of leans her head back on my chest and looks up at me. She goes, “What’s your favorite things about your daughters?” Then we shot the scene, and that’s the scene they ended up using. She put the knife right in my heart, boy. She knew exactly what she was doing. She was a joy to work with. I loved doing scenes with her.
DAVID GLASSER | You’re shooting in incredible conditions after being on a journey for a very long time. We started this show in 108-degree weather in Texas and ended in Montana in 15-degree weather with below 5 chill factor, and [May is] in a tank top for the last three episodes of the show. 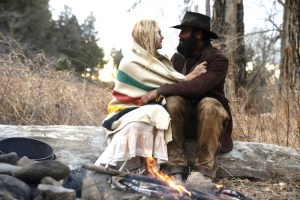 … The conversation between James and Elsa when she’s dying, I mean, you’re sitting on set as a father who has read this script, seen all the cuts, knows what’s coming, and you’re getting welled up! I think for everybody on set, as I looked around, crew, grips, gaffers, PAs, it was, like, still. There wasn’t a pin dropped. People were not even moving the cable that they had to move…obviously, Tim and Isabel just brought everything they had to it, and I think because of the relationship that they all formed, it was as real and authentic as you’re ever going to get in anything that you do. Personally, I just think it was magnificent.

TVLINE | James and Margaret’s Civil War experience — him as a soldier and her as a nurse — has come up several times this season. And the war isn’t that far removed from where they are at this point in the story. I imagine that trauma plays into their reactions to Elsa’s injury and death, as well?
MCGRAW | Absolutely. I think there’s a lot of PTSD going on with James, Margaret, Shea, Thomas — everybody who experienced that war and then all that went on at Reconstruction. Part of the reason James wanted to get out of there, he was trying to run from it. I think he was constantly reminded of it. He was constantly shell-shocked from it. But it steeled them both in a way. It bonded their love and their characters in a way that nothing was going to shake it.