This Monday on NCIS, “Take Your Child to Work Day” takes a terrible turn when accidental exposure to a deadly biotoxin puts a literal barrier between Jimmy Palmer and his daughter Victoria.

Brian Dietzen –Jimmy’s longtime portrayer and the co-writer of the episode airing this Monday at 9/8c — shared with TVLine a preview of Jimmy’s quarantine crisis, poor Victoria’s fear of losing a second parent, and more.

BRIAN DIETZEN | How are you, man? It’s been a long time.

TVLINE | I know. I think the last time we spoke, Jimmy was stuck out on a ledge.
Yeah! That was [filmed in] 2016, I remember, because we did that show and then that week the Cubs won the World Series. I’m a huge Cubs fan, so I was like, “What a great week I’m having!” 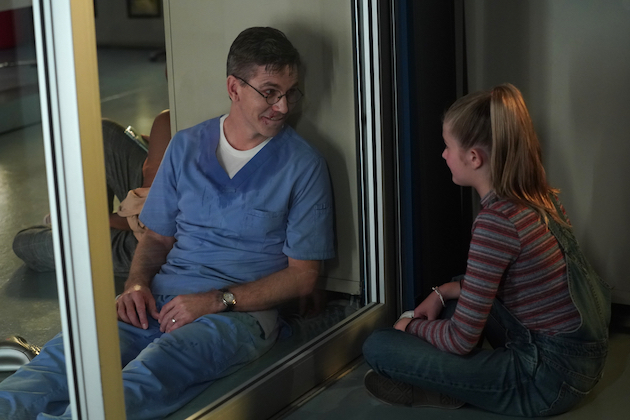 TVLINE | It sounds like we’re not bringing young Victoria Palmer (played by Elle Graper) back under the best of circumstances….
No, no…. You know what? I take that back. We’re bringing her back because she’s going to come to work with her dad for a day! And so, the circumstances under which she comes back are not all that awful. But the things that happen afterwards, as they wont to do in NCIS universe, get a little trickier than was initially proposed.

TVLINE | What all happens? Jimmy and Kasie (Diona Reasonover) get exposed to some sort of biotoxin…?
As you know, Kasie and Jimmy examine all the evidence and bodies and whatnot found at crime scenes. And as they do that this episode, they are exposed and it’s basically left to their team to help them out of this situation. There’s really no way of getting clean of this thing, and that created an awesome opportunity for us to bring back the amazing Meredith Eaton, who in the past has played Carol Wilson, a famous [CDC] epidemiologist. She was not available to come play with us at all for the last five years or six years [because of MacGyver], but so now she is and we are more than happy to have her back. She’s so damn talented and such a good person.

TVLINE | Of course, no one on NCIS is ever really left unable to do anything. What do Jimmy and Kasie manage to accomplish towards their own cause?
Well, locked inside of the forensic laboratory you have two people that are fairly smart and they’re surrounded by all of these different test tubes and chemicals and whatnot, so you can imagine they’re trying to put together any sort of concoction or cure that they can. Whether or not that’s successful will remain to be seen, but they’re trying to save their own bacon. And in the meantime, Jimmy’s daughter is looking on and hoping that she doesn’t lose two parents in the course of a year-and-a-half. 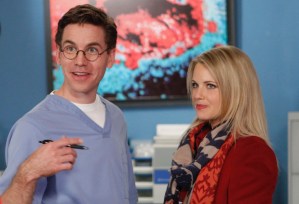 TVLINE | Speaking of Breena (played in the past by Michelle Pierce), during this ordeal might we hear Jimmy speak of losing his wife in a way that he hasn’t quite done so during the past year?
I think that it’s natural when you hit a near-death — spoiler: I’m still doing the show — that you start thinking about people who have gone before. He’s left with his daughter who means more to him than anything, especially since it’s just the two of them, so Breena definitely does play into that quite a bit.

She was lost to COVID and we didn’t see her [during that ordeal], so there’s definitely going to be a lot coming up for Jimmy, and a lot of it’s going to be going in his subconscious. And a lot that he works out and talks about with his daughter, and with Kasie as well. I’m glad you brought that up because it’s a big, important thing for Jimmy. So many people have lost friends, loved ones to this awful pandemic, and we did this huge time jump in the middle of our [previous] season, and instead of having some teary-eyed bedside goodbye, which no one was able to do at the time [because of COVID measures], they said, “We’ll just have him say goodbye months and months afterwards,” which was hard. Oh my gosh, that’s a difficult thing. 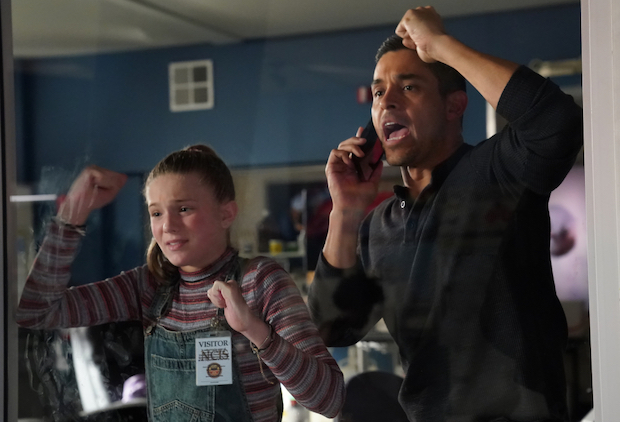 TVLINE | What sort of tricks does Torres (Wilmer Valderrama) have up his sleeve to keep Victoria’s mind off of the prospect of losing another parent?
Honestly, that’s like one of my favorite parts of the whole show, the fact that Wilmer just kind of knocks it out of the park in this episode. It’s funny, because he was like, “Damn, I didn’t feel like I was doing like a whole hell of a lot.” But I had just sat in on our cut, so I said, “No, your presence there of just being this kind of uncle figure to her and holding her hand through this whole thing, distracting her, keeping her mind at ease, is so important.” Wil just does an amazing job at it, with his presence within it. There are a couple of moments that definitely got me, you know? Where I’m thinking, “Wow. I co-wrote this thing and you’re still getting me, man. That’s great.”

TVLINE | The title of this episode is “The Helpers.” Is that a reference to the famous Mister Rogers quote?
It is, yes. But I won’t say anything beyond that. But this is definitely something that Jimmy has wanted to do, look towards people who are going to help one another.

TVLINE | As the co-writer of this episode (with executive producer Scott Williams), who would you say it most gets a chance to shed light on?
Honestly, this is going to sound like such a cop-out, so I apologize in advance. I already mentioned Torres, because in the last episode he was in the middle of an underground fighting ring and he has some real demons about, “Do I have a family anymore?” With the departure of his biological father, as well as his work father/mentor in Gibbs, and of course losing Ellie Bishop to the CIA operation, he is basically like, “What the hell? Am I going to be alone constantly?” So, there is a next step in his character’s journey, taking care of Victoria, which is fantastic.

Also, Katrina Law’s character, Agent Knight, we could see some stuff out of her that we haven’t seen before. She’s got some new doors open, which is really, really fun. There’s one scene in particular, and you’ll know when you see it, where you just go, “Oh, man that kicks ass. That’s really cool.” 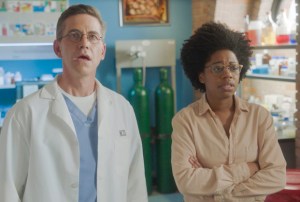 And then I’ve got to say, Diona Reasonover is fantastic with her performance in this. I always love having scenes with Diona; she’s one of my closest friends on and off the set, and I was really glad that she was able to shine in this. And Sean Murray’s McGee also gets to step up and take charge in a moment when he needs to. And Parker (Gary Cole), we get to see him operate with a little defensiveness of his team and get a bit pissed off.

Obviously, I’m kind of naming off all the characters, but when Scott [Williams] and I sat down to write this, we thought to ourselves out loud, “This easily could become just about two people who are in trouble, but our series has always been about this team and how it supports one another.” One of our producers once said, “You know, our show’s not ripped from the headlines, it’s ripped from the characters,” and I really like that about our show. That’s the DNA that I’m tuning into each week.

TVLINE | How have I been covering this show for what feels like half my lifetime and I never heard that “ripped from the characters” quote before?
Isn’t that cool? That was Josh Rexon, who used to work on our show and then went to go work on [NCIS:] New Orleans. And it does make a lot of sense. We try not to get too topical with current events-type of stuff because we want the show to be able to be viewed at anytime and be like, “Oh, yeah it’s relevant because it’s about the humanity of it” as opposed to doing an episode on whatever. 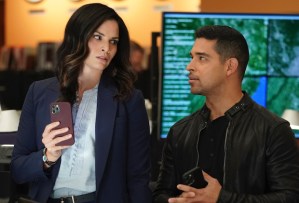 TVLINE | So, no trip to Hawaii for Brian Dietzen for the March 28 crossover?
No. I was asked about that at the beginning of the year and I said, “Sign me up!” And then it came down to Wil and Katrina going. I believe Diona is also going to be doing a scene, but from here [in California]. So, no, not this season. But I’m holding out hope for next season. Maybe they’ll do it either at the beginning of the season or the very end, so I can parlay it into a couple of weeks there.

TVLINE | Are you confident that you’ll at least get a postcard from one of the others?
Oh, God, no. I won’t even get a text. [Laughs] They’re having too much fun. I was just looking at their Instagram feed, and I’m like, “Oh, that looks nice”… says the guy in Southern California. Hey, I’ve got nothing to complain about.

TVLINE | Lastly, can you tease anything else that’s coming up this season?
A lot of it is a bit of a mystery for me because our writers right now are breaking the last couple of episodes. You know, we weren’t initially picked up for, I think, 21 episodes. Because of COVID, everyone was picked up for a bit less, and we got our final numbers solidified not too long ago, so everybody’s kind of in a mad rush to break everything and get the writing assignments and whatnot. But I do think the thing that’s going to be happening — and one of my favorite things in the world — is that you’re going to see this team coalesce even more and come together even more. But yeah, there are definitely a few “big events” that have been floated out there that I’m hoping come true, but I can’t report on them because I plain don’t know yet!