Is 9-1-1‘s Eddie still in touch with the 118? Which Station 19 duo has “great” things ahead? How has S.W.A.T. armed itself for Episode 100? Read on for answers to those questions plus teases from other shows. (Email any brand-new Qs to InsideLine@tvline.com.)

Do you have anything on 9-1-1‘s Eddie Diaz, who resigned from the 118 in the midseason finale? –Novalee
The spring premiere airing Monday, March 21 involves a small time jump, coming out of which viewers will discover what exactly Eddie’s new job is and if/how he still has a connection to the 118. (IOW, it’s sounding like a big story for Ryan Guzman in the back half of the season.) 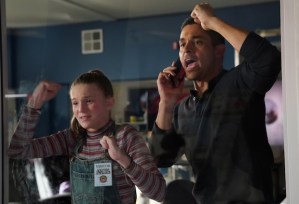 Is NCIS‘ Nick Torres OK…? He was not coping real well in the episode “Fight or Flight,” and the team was asking him about his drinking again. Will the show address his well-being in future episodes? –Liz
As a matter of fact, the next new episode — airing Feb. 28 and co-written by cast member Brian Dietzen — includes “a next step in [Torres’] journey,” as the increasingly despondent Special Agent is tasked with keeping an eye on Jimmy’s daughter Victoria (guest star Elle Graper) during a workplace crisis. “Wilmer [Valderrama] just kind of knocks it out of the park,” Dietzen reports. “There are a couple of moments that definitely got me, you know?”

Did the Nash Bridges TV-movie did well enough to bring back the series? I would love to see more! –Mason
There is nothing to report on that front, but a cursory look into its ratings do not bode well — both a Premiere League match-up (with 373,000 viewers) and a Chrisley Knows Best rerun (255K) apparently drew larger crowds to USA Network that night.

Will we see more of Station 19‘s Travis and Emmett anytime soon? –Monika
I delivered your question to showrunner Krista Vernoff during this year’s SCAD TVfest (which streams this Thursday through Saturday; get details), and she excitedly responded, “Oh, there’s great stuff coming up for Travis and Emmett. We just read a great script for them. So… yes!” 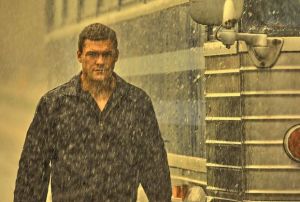 When can we expect Season 2 of Reacher? –Gary
The smart money says by early 2023. As showrunner Nick Santora told TVLine, “We’re hoping to start [filming] hopefully sometime this calendar year, if things can get moving quickly enough.” As for where Season 2 will shoot (for Season 1, Toronto played the role of small-town Georgia), that is TBD and likely reliant on which Lee Child book/setting is chosen to follow next.

Do you have any scoop about Amelia and Link from Grey’s Anatomy? –SS
Let’s see: Amelia has said she loves Link but doesn’t want to marry him (ever), and now she’s attracted to Kai. Link no longer wants to get married, but just saw Amelia kiss Kai…. As one might surmise, it’s “pretty complicated” for all concerned when Season 18 resumes next Thursday,’ says showrunner Krista Vernoff. “It’s pretty complicated. It’s never easy, romantically, in the halls of Grey Sloan!” And while Vernoff was mum on what is ahead, she did confirm one twist that is not. “There will be no ‘throuple’ this season on Grey’s Anatomy,” she avowed when presented with the suggestion, then noting: “It’s rare that anyone gets a firm answer from me on anything.”

Any chance we’ll ever see Grey’s Anatomy‘s Link guest-starring on Station 19? — @HotticusLincoln
“Sure! I think theres always a chance,” Grey’s/S19 boss Krista Vernoff said when I delivered your Q. “We love Link, and we love crossing over between the shows. I think at some point everybody will get their turn.”

Any word on how many seasons The Handmaid’s Tale has left? Would you guess they’re getting close to the end? –Jason
I recently ran that very Q by Hulu originals chief Craig Erwich, and after touting the “spectacular” viewership that Season 4 drove (and noting that Season 5 starts up production soon), he said that “any decisions regarding the long‑term creative roadmap for that show will continue to be made by [series creator] Bruce [Miller] and Lizzy [Moss] and [EP] Warren [Littlefield].” (Similarly, Erwich had nothing new to report on the sequel spinoff that’s been in development, titled The Testaments.) 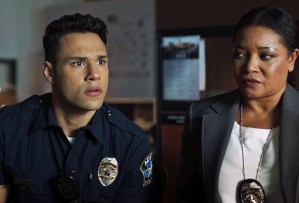 Now that the first hint of Carlos becoming a detective has dropped in 9-1-1: Lone Star, will we see him trying to become one more this season? –Sarah
Well, short of an official promotion, Carlos (played by Rafael L. Silva) will be “Detective Reyes” when in a late March episode, he and Grace Ryder (Sierra McClain) team up and investigate a crime that affects both of them professionally.

Can you please give us anything on the 100th episode of S.W.A.T.? –Patricia
Ohhh, it promises to be a doozy! Currently penciled in to air Sunday, April 10, the milestone hour will find Hondo framed for killing two fellow officers, after which he goes on the run to clear his name. (You can also expect the return of a bad guy from the series’ past….) 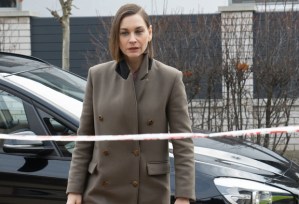 I have been loving FBI: International, but I am wondering when will we get a Katrin Jaegar-centric episode? –Demar
Christiane Paul’s character is a bit more present in the next new episode (airing Feb. 22), which is set in Frankfurt aka Jaegar’s homeland. Beyond that, I am hearing there’s an upcoming episode that will feature a bit more action for the character.

Do you want scoop on a favorite show? Email InsideLine@tvline.com! Questions left in Comments will not be read and may very well count against your final score.