Series star Eve, who plays Brianna aka the Nasty Bitches’ Professor Sex, has been missing from most of the back half of the ABC drama’s first season, owing to the rapper/actress’ real-life pregnancy. (She and husband Maximillion Cooper welcomed Wilde Wolf Fife Alexander Somers Cooper into the world on Feb. 1.) The series dealt with Eve’s absence by having Brianna, who was shot at midseason, fully recover and relocate to Piedras Blancas with her children.

However, the finale provided an opportunity for a reunion of a sort when the Nasty Bitches were inducted into the Hip Hop Hall of Fame. Just before Jill, Naomi and honorary queen Lauren took the stage, host Lady Z cued up video tributes from rapper Trina (playing herself) and… Brianna!

So when TVLine spoke with series star Brandy, as well as with showrunner Zahir McGhee, we wanted to know all about how that was pulled off — as well as the odds of Eve returning for a potential Season 2, Naomi and Eric’s happy ending and more. Read on to hear what they had to say. 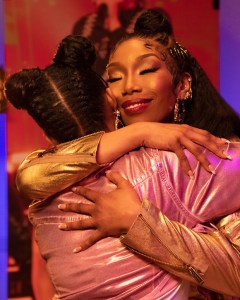 TVLINE | I’m such a jaded TV watcher that, in the beginning, when Naomi is rapping about how she’s taking off her armor and soaring like a butterfly, I thought, “Oh, she’s definitely going to be heartbroken by the end of the episode.” But you didn’t do that! The answer to Jojo’s paternity could have been a cliffhanger, but you chose to resolve it and give her a happy ending. Talk to me about that choice.
ZAHIR MCGHEE | I’m going to admit something that I don’t feel great about admitting… In Episode 2, we did this thing that, frankly as a writer, I was like, “This is not even that great, but it’s cute,” which was Cam’ron and Jojo ordered the same burger… It wasn’t anything profound to me, and it wasn’t something that I thought people should hang their hat on. So, once Naomi said Eric was the father in Episode 4, I was shocked to continue to see people online being like, “I don’t believe it! Where is the paternity test? They ordered the same burger!” [Laughs] And I was like, really? I just couldn’t believe it.

…And obviously, to some degree [it was] filling a void, because Eve was our center in terms of “This is domestic life.” And I like that Naomi was not only able to fill her physical house — which was the only major set we have [Laughs] — and that was a problem, and then also give us that, you know, positive Black family. I’m glad that all that’s out of the way, and Naomi has some joy, and Eric has hopefully redeemed himself.

BRANDY | I love the ending. I love the ending. I love that she let her guard down and she was able to let herself be married and give her daughter a better life. That’s all I could think about while this was going on. I’m a mom in real life, so I pride myself on being a great mom. So now to be a good mom on television, married and loved and loving the men I’ve loved my whole life as a character? It’s just unbelievable. It felt real. I was like, oh this is great. I’m not trying to get married. [Laughs]  I’m the one for myself only, but I like the way this feels. It was great.

TVLINE | That big scene at the end, where Brianna congratulates the ladies: Did you see that while shooting, or was that laid in afterward?
BRANDY | We saw that in the moment. Our amazing director [Sidney Sidell] said he didn’t want to show us in rehearsal or anything. He wanted to show us in the moment while we were filming. It was one of the hardest things to get through. Because I was like, “Oh my God!” I was so excited to see her, and she looked beautiful and we just miss her so much. So I was definitely emotional. We all were emotional, but we were trying to hold it together for the scene.

TVLINE | What can you tell me about Eve’s involvement in the show next season?
MCGHEE | She’s she’s a huge part of the episode. I’m really proud that we were able to keep her as part of the group and in the minds of the group at the end of [Episode] 12 and all through [Episode] 13. I hope people feel her presence… 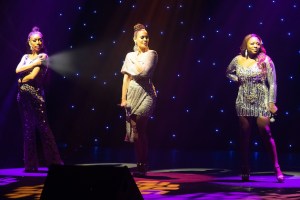 …We know there’s someone under that fourth spotlight, and who is it?!, right? Obviously, myself and the fans hope that it’s Eve. But for me, in terms of what’s going on in her life — I talked to her just a couple of days ago — I just want her to enjoy this time.

I know she’s super proud of the show, I know she’s watching. And the show is obviously better with her. So, we’re definitely hopeful that she’s going to come back. But it’s not something I ask her about, because what’s she’s going through right now is just way more important, and we want to give her that time and that space.

TVLINE | How did you get the footage of her? Did she shoot it herself?
This is the shocking thing: This took longer than one of our six-person, round-robin scenes in a tight space. [Laughs] So, we did what we have been doing for our press [engagements], basically, which is people send us these elaborate camera kits, we set them up ourselves, and we talk someone through it. So we sent her that. You know we figured she would probably enjoy getting glammed up — which apparently she did [Laughs] — and then we got on a Zoom. [We] were on Zoom with her for about two hours going through it, giving us some different choices, giving us some different options. So, she shot that in her home, which obviously doesn’t quite look like Costa Rica, but people just have to deal with it. [Laughs]

Now it’s your turn! What did you think of the finale? Grade it — and the season as a whole — via the polls below, then hit the comments!