Sunday’s Power Book II: Ghost Season 2 finale marked the end of an era: It was Powerverse creator Courtney Kemp‘s final episode as a showrunner for one of her shows at Starz. And the executive producer went out with a bang. Several of them, to be exact.

The episode saw the death of not only Daniel Sunjata’s Mecca, who was fatally shot by Monet, but also Zeke (!), whom Lorenzo killed when he mistook the young man for Mecca. At the end of the episode, Monet got word that her son had been found dead… and Lorenzo didn’t say anything about pulling the trigger.

In Tariq-related news: Braden testified at the trial, saying that he’d been dealing drugs out of their dorm room and that Course Correct was his solo operation. That wound up being enough to get the judge to dismiss the case, and the bailiff removed Tariq’s ankle bracelet. He briefly considered stopping Yaz’s adoption and taking back custody, but eventually realized that there was a better solution. (More on that in a moment.) He also learned that Lauren had died in a car accident, news that affected him greatly.

Near the end of the episode, Tariq pulled some strings and had Tamika bring Yaz to live with Tasha in Witness Protection.

In 2021, Kemp signed an overall deal with Netflix; though she will maintain a presence on Book II: Ghost and the other Power spinoffs, she will no longer be as involved as she has been since Power got underway in 2014. On Friday, TVLine chatted with her about her showrunning swan song. 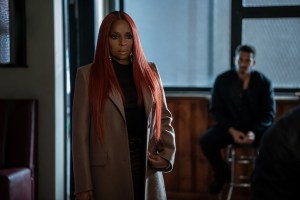 TVLINE | I’m looking forward to when Monet finds out about Zeke, though I would not want to be in her vicinity when she does.
She’s going to be a very different person next year. Next season, the version of her that was trying to hold onto control in her world, that’s gone now. That’s over.

TVLINE | And Zeke was her plan, and the plan is now gone.
Yes. The plan’s gone. Her son’s gone. And if you were watching all along, she preferred him, did she not? She preferred him to her other kids. So now the chickens will come home to roost in terms of how she treated those children, in terms of what she was hoping for her future, all of that. And plus, her husband is guilty of the crime! There is that. She’s going to find out in a big way and that’s going to be… well, I’ll leave that for Season 3. 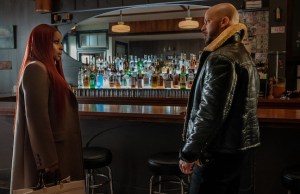 TVLINE | Do you think she thought she and Lorenzo had a united front moving forward?
I don’t think she was at all. From my perspective, it had to happen because it was the right thing for the family that she pick Lorenzo over Mecca. And she made a decision for herself that was the right decision. But is she in love with Lorenzo? No. And she was, in a lot of ways, in love with Mecca. But she had to do it, no matter what.

TVLINE | I love whenever someone in one of your shows says, “I’m going to do this, and then I’m going to get out of the game.”
Because you know I’m lying, right?

TVLINE | It feels to me like Tariq, at the end of this season, is weary of what’s going on.
He doesn’t want to do it anymore. He doesn’t want to have to run and hustle and all those things. But then, at the same time, it’s the world that he’s in and he needs the money and he needs to keep going. So he’s going to keep going. I think that’s relatively clear. He would like to get out. But, like father, like son. Ghost wanted to get out, too. That’s not what happened. [Laughs]

TVLINE | Was it always the plan to have Tasha in the finale?
Yes, it was always the plan. And all season, the fans have been asking me, “When will she be back on?” And I’m like, “She’s busy! She’s on Queens!” which was true, but we got her out just to do this. And the thing people don’t understand about the TV business is how hard it f—king is to get somebody off a broadcast show to come and do [a guest appearance]. Because the way that their schedules are? Not an easy feat.

TVLINE | Obviously, Tasha’s not going to be happy until they’re all back there again.
No, of course not! How could you be as long as you don’t have access to your kid?

TVLINE | In your mind, is there a world in which they could be reunited again?
Yeah, but Tommy is going to make that difficult. He’s also got his own show. He’s busy, but he hasn’t forgotten any of what went down. And also, Tariq has to finish school in order to get his payday from his dad. So yes, there’s a version where they’re all together and they have the money, but Tariq has to finish college first. He’s got a lot to do between now and then.

TVLINE | What moment from the finale are you most looking forward to the fans seeing?
I’m very much looking forward to Tariq getting Yaz to their mom, even if he can’t join them. If people don’t love Tariq now, what can be said?… If you don’t love him, then something is deeply wrong with you, because he has now become a great kid. He has become a great person. Someone who can really value someone’s needs over his own.

Now it’s your turn. Grade the season finale via the poll below, then hit the comments with your thoughts!